Shalom Shall Not Come Without Justice, Prime Minister 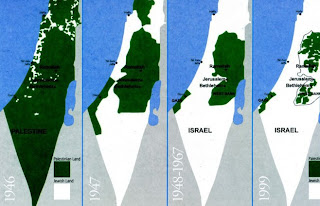 What came first, the terrorist or the oppressive regime?

Representative Peter King has no problem glorifying the IRA. He sees them as heroes in a fight for the oppressed Northern Irish against the British Empire. And I could see why. The Irish have historically (and up to present, still poorly) been treated amongst the worst in Western Europe. Much of what was later practiced on African-derived populations was first practiced on them.
So, to Peter King, blowing up cars and pubs was a small sacrifice for liberating the Northern Ireland majority and allowing Irish Catholics to control their own fate while receiving economic and political justice.

I wouldn't go so far as King in the least. Not just because King is selective in the types (colors) of terrorists that he supports. I don't like Hamas or any other group that uses terror tactics to try to make their point or get ahead. But I can see where they're coming from. If my family were brutalized, humiliated, killed, tortured, displaced, disappeared, and ostracized like many of theirs were, I'm not sure I'd be so happy myself. I'm not so sure that I'd be able to fight exclusively in a non-violent way.

But that's just it. Palestinians have been fighting and resisting non-violently (passively) for generations upon generations. And how are they rewarded? They're ignored. Called "terrorists". Shot with bullets. With "might, power, and beatings."

And you wonder why any of them would consider taking that route?

And yet, Israeli Prime Minister Benjamin Netanyahu comes to the US Congress (the United States, by the way, has been funding the entire empire state of Israel and is largely responsible for this genocide) and declares that he will not re-establish the 1967 borders of Gaza and the West Bank, but yet he is willing to make "painful compromises" to establish peace in the land.

What "painful compromises" are you willing to make, Netanyahu? To *not* shoot any Palestinian you see? To allow them to find paying jobs? To allow aid in to Gaza? To not applaud Israeli terrorists? To discontinue to illegally take their homes, land, and crops from Palestinians who have been there for eons? To recognize their right to self-rule?

And then what kind of "compromise" are the Palestinians going to have to make in turn that they haven't already? Are they going to have to "swap" more land?
Or are the "painful sacrifices" just that more Palestinian children will have to die in order to secure "peace."
Not shalom, mind you. Not biblical peace. Roman, occupational "peace."

And yet it's my American Christian brothers and sisters who most adamantly defend the practices of Israel. They maintain that they are honoring the Israel of the bible by standing with them no matter whom they harm. I doubt that most Christians who "honor Israel" are doing it out of any other Biblical precept except to fulfill end-times "prophecy."
They certainly aren't looking at the Old Testament prophets. Or the histories of ancient Israel...
Written by jasdye at 10:46 AM