What's on the ol' nightstand

Funny title because I have no books on my nightstand, and it's not near my bed. A more accurate title would read: What I'm not reading right now because I'm reading this. 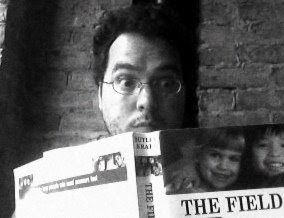 The Absolutely True Diary of a Part-Time Indian - Sherman Alexie
Dang it!! Fifty pages into this beautiful and hilarious young adult novel and I'm sure that I won't be able to create the YAL to define a generation Catcher in the Rye-style. Alexie's beaten me to it. That is, if Neil Gaiman already didn't... (other must-read: The Lone Ranger and Tonto Fistfight in Heaven, a collection of short stories.)

The Prophetic Imagination (1st Edition) - Walter Brueggemann
Few pages into it and not really sure it's my cup o' tea. Unfortunately, don't think I'll get to chance to figure it out just yet. However, an excerpt:

The hypothesis I will explore here is this: The task of prophetic ministry is to nurture, nourish, and evoke a consciousness and perception of the dominant culture around us... The alternative consciousness to be nurtured, on the one hand, serves to criticize in dismantling the dominant consciousness. To that extent, it attempts to... engage in a rejection and delegitmatizing of the present ordering of things. On the other hand, that alternative consciousness to be nurtured serves to energize persons and communities by its promise of another time and situation toward which the community of faith may move. To that extent it attempts... to live in fervent anticipation of the newness that God has promised and will surely give.

A Call to Conscience: The Landmark Speeches of Dr. Martin Luther King, Jr. - ed. Clayborne Carson and Kris Shepard.
It's pretty much what it says it is. Also overdue. I'll see how much of it I can finish tomorrow. Also, apparently it's out in audiobook. Wonder who gets to be vocally compared/contrasted to King there.

Prophetic Deliverance: The Missing Ministry of Jesus in the Church - T. C. Mather
Amazing. That is, if you like me are not used to words like 'deliverance' and 'prophetic' being used in a toned-down Charismatic/Pentecostal-style. It's self-published, so I'd like to know if this could be made available via PDF or somehow easily accessible. Also, one of those rare books that I actually finished.

Team of rivals : the political genius of Abraham Lincoln - Doris Kearns Goodwill
Okay, my subdued man-crush on Honest Abe may force me to read this eventually. But probably not this one.

Jesus and Nonviolence - Walter Wink
Snap! I finally got this book (which I want to quote at length, alas...) and love it so much that I lose it on the very same day.

There are good reasons for reluctance to champion nonviolence. The term itself is negative... "Nonviolence" is identified by many as the injunction to be submissive before the authorities. Romans 13:1-7 has been interpreted as an absolute command to obey the government whatever it does. "Turn the other cheek" became a divine ultimatum to slaves and servants to accept flogging and blows obsequiously. "Love of enemies" was twisted to render the oppressed compliant for the very heart, forgiving every injustice with no thought of changing the system. Nonviolence meant, in the context of this perverse inversion of the gospel, passivity...

When church leaders preach reconciliation without having unequivocally committed themselves to struggle on the side of the oppressed for justice, they are caught straddling a pseudo-neutrality made of nothing but thin air. Neutrality in a situation of oppression always supports the status quo...

A proper translation of Jesus' teaching [in Matthew 5:38-41] would then be, "Don't strike back at evil (or, one who has done you evil) in kind." "Do not retaliate against violence with violence." The Scholars Version is brilliant: "Don't react violently against the one who is evil." Jesus was no less committed to opposing evil than the anti-Roman resistance fighters. The only difference was the means to be used...

Now we are in a better position to see why King James' faithful scholars translated antistenai as "resist not." The king would not want people concluding that they had any recourse against his or any other sovereign's unjust policies...

This Land Is Their Land : Reports from a Divided Nation - Barbara Ehrenreich
Really, really looking forward to reading Nickel and Dimed. But this was a good satiating of the ol' progressive appetite.

You can view the interview for this book on the Colbert Report here (hopefully).


Psalms - Various
I hear a lot of evangelicals (good people, good friends) say that they read the Proverbs on a daily basis. Doesn't really make a lot of sense to me, to be honest. It's like reading an advice column and thinking that since it's the Bible, it's all applicable. But if you're going to read some ancient Hebrew poetry, I can't think of a better place to start than these honest (too honest, at times) prayers. Well, maybe the first couple of chapters of Genesis and latter Isaiah...

Miscellaneous:
These are books that I've put on hold. They're wonderful and very consuming of attention. Digestive and challenging. Which is probably why I've put them on hold for this time.
Surprised by Hope - NT Wright (short excerpt)
Jesus Wants to Save Christians - Rob Bell
Prayer - Philip Yancey
Written by jasdye at 10:37 PM No comments:

Paste Magazine has been asking your favorite albums of the decade (in whatever it's being called these days: the Aughts? The Rockin' Aughties? the "Double" "O's"?) and it got me to straight-up thinkin... Hmmm...

Okay, this is not my definitive list. It's more of a working-edit list - a preparation for the big event that is the roar of the Big Teens. Nothing is set in stone here.

Bare in mind that I haven't bought too much music recently and that only occasionally have I really been able to delve into the latest and greatest (only to be reminded once again that just because something plays good on the radio doesn't mean it lasts. I'm looking at you, just about every band). I still have a lot of music recently that I'd like to play a few more times, loudly, to see if they make the cut or fake the dump (do you think that phrase will make the cut... or fake the dump?). Even ones listed on here should get another couple spins before I

A further complication is that either rock music is spending less time composing the full-length album and going back to the singles format, only still selling 50-70 minute records, or I'm just too lazy to listen to a full album anymore.

In no particular order except Album - Artist:

Note, I deliberately tried not to double-up on artists.

Others that are in consideration include U2, Joe Henry, Metric, Mars Ill, Jay-Z (for Fade to Black, which I'd have to consider apart from his post-retirement drizzle), Hold Steady (I'm still torn on them...), and Radiohead.
Written by jasdye at 8:18 PM 1 comment:

The internal cause of such enculturation [as the American ethos of consumerism has been wrought particularly in the American Church] is our loss of identity through the abandonment of the faith tradition. Our consumer culture is organized against history. There is a depreciation of memory and a ridicule of hope, which means everything must be held in the now, either an urgent now or an eternal now. Either way, a community rooted in energizing memories and summoned by radical hopes is a curiosity and a threat in such a culture. When we suffer from amnesia every form of serious authority for faith is in question, and we live unauthorized lives of faith and practice unauthorized ministries.