Shaquille just did an old school fast-break, like back in the LA days, only faster. What the ?????

If Detroit doesn't pull it out of their a** now, I'll just go ahead and root for Dallas.

In other news, had a great weekend.

I didn't get any work done of course. I cut open my right thumb washing my coffee pot and got four butt-ugly stitches there. I broke two pairs of my glasses within the last week - so I have to live with a crooked pair now. I sweat like a monkey's behind trying to weed my girlfriend's parents' little garden before we got rained on - twice. Got a tetinus shot (talk about a shot in the arm). Still at a crossroads - or a few - as to when the wedding will be. Heck, I got slapped by a friend. And trapped into planning a baby shower. I'm singing in front of the church and my voice cracks, three times. And I practically injured my knee playing basketball wearing skater-shoes sans socks in a makeshift gym in a abandoned Mason's lodge-cum-church, forgetting that I'm old and I need to stretch pre- and post-workout EVERY TIME.

But I got to spend some time with Jennie. And Jennie's moving two miles away next weekend. And she may have a permanent job as soon as tomorrow. And we have allies where I was worried we didn't.

Dwayne Wade. Phenomenal player. One of the leaders of this new golden age of NBA ball that's dawning on us. Like teammate Antoine Walker, a fellow Chicagoan. Unlike LeBron, humble. But, dang, he cries. No wonder Michael doesn't show the same love for him he does James.

Oh yeah, I got Fold Zandura's Ultra Forever and some songs from Starflyer 59's self-titled debut (aka, "the Silver Album") via iTunes (I owned both previously; one got lost, the other existed solely in cassette form). I also ordered Mike Knott's Screaming Brittle Siren. Knowing that nobody's ever heard of these albums or performers before, I guess it's about time for another classic albums post. It'll probably be three weeks before I get around to some of the intensive reviews that I want to. But, I want to. So, there you go.

Why I went into the Othercott...

Why othercott? This is what I was trying to dissuade. Dang the dupes.

Not really searching for truth or anything...

I've decided that I've talked enough about the Da Vinci Code enough on other blogs that doing so here would be redundant, unnecessarily repeating myself. You know, saying the same thing over and over. But, while othercotting it to see the relatively family-friendly, frantic and funny Over the Hedge I was practically insulted by how many people went to see DVC. I wanted to say something to a co-worker (a Catholic, nonetheless) who began a conversation this morning by absent-mindedly addressing Romeo & Juliet as Da Vinci Code (the similarities are striking), but my room got barraged into an administrative meeting with the principal. And it's still a mess (not from the meeting, mind you). Her viewpoint (the co-worker's, not the principal's) was along the lines of, "I went to Catholic school all my life, so I'm pretty aware of where the book falters."

And it's not that I'm afraid that everyone who sees the movie will drop their pants and sacrifice their babies to Satan in the middle of a self-defecating orgy or anything (although elements may be true...) but that it's a matter of 1) wanting the Church to stand up and defend truth in all public arenas (even when that means, yes, going against the Republican agenda and Walmertica) and 2) economics. You see, the more money an insipid movie like this generates, the more insipid movies like this will be greenlighted. Although I think in many ways it's giving Americans what they want - not necessarily the burn-Jesus legacy thing, but the It's-Friday-night-and-I-wanna-see-a-dumb-flick-with-my friends/chick/bff/dead cat I stuffed in my overalls-that-doesn't-require-any-thinking-and-this-is-gonna-be- popular-because-a-whole-bunch-of-people-are-going-to-see-it-and-I-like- pretending-I'm-popular-so-yeah-I'll-go-see-that mentality, which is to say it doesn't ask of much, neither deliver much - well, in some senses. 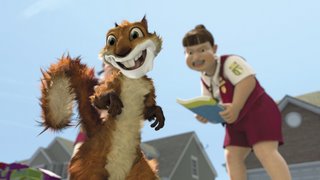 In regards OtH, Steve Carrel is the voice of a super-hyper squirrel whose lone encounter with Red Bull stops the world in its tracks. Which proves Carrel can do nearly any comedic performance - although this one has similarities to his Anchorman role. Wanda Sykes played the skunk with gumption with, well, gumption. Yeah, an African American female with an attitude and a turned-around "I don't need a man" outlook. That's not original. And William Shatner played his usual self-parodying self in the role of an over-acting possum. Eugene Levy and Catharine O'Hara played great "Oh gohsh" Canadian porcupines, which would be an animal against character-type, eh?

In other news, Jennie is back, for good. She's looking for a job, I'm trying to survive the rest of the semester. Hopefully, she'll be down in the city shortly. 'Cuz, Lord knows, tstb.

Love y'all. Even the baby-eating devil-lovin' necros that went to see DVC.
Written by jasdye at 9:46 PM 7 comments:

It's been awhile. Whirlwind weeks. Sorry been out of the loop (although a few of you have gotten crazy emails from me about the Othercott*), but it's been a whirlwind two weeks for me. And it doesn't look like it'll slow down either. But I wanted to take some time to succinctly sum up my life at this moment:

But soft, what light through yonder window breaks?
It is the east, and Juliet is the sun! 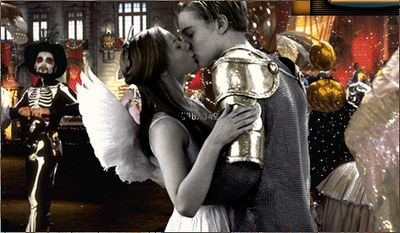 Jennie is stay-ing!
Written by jasdye at 2:23 PM 4 comments:

Jennie's got some big news. But I'll let her tell it.

I love her. But that's not news. I still want to shout it from the rooftops, though.

And on the other side, kids, you might wanna hang on to yer hats. Uncle Jason's gonna drop some more big news - hopefully within the month.

My computer screen has fingerprints all over it. Dang students!

The Bulls lost in six. That's one more game than I thought they'd last, honestly. But Phoenix beat the Lakes. At this point, that's all I care about.

I traveled through Wisconsin and didn't get pulled over once. I'll be pressing my luck once again this weekend going through Central Illinois, Missouri, and Northeastern Okeehoma. But the squad force isn't as strong in those parts. Just in case you were somewhat interested.


Have I ever read - or seen a production of - Romeo and Juliet. I have to start teaching it tomorrow. Awww, puppy-dog-adolescent-suicidal love. That's a fresh scent in the air.

*Many back alley conversations on "King of the Hill."
Written by jasdye at 7:43 AM 12 comments: