This is a part of the Rally to Restore Unity link-up going on this week.

You've probably seen or heard the little ruckus going around Evangelicals within the last few months, since a book by a pastor was leaked to put out the idea that hell may not be as permanent for everybody as commonly taught. That didn't sit well with some, and for quite a few, that stood ugly.
But it's a family affair. And, as with any family, there are going to be broken alliances, fisticuffs, hair-pulling, screaming matches, denouncements, blame-gifting... Families can do that.
In fact, the only real fights I ever got into was with my brothers. I might not have to tell anybody who's had a brother why that is...
Ever get caught in the middle of a public domestic dispute? I'm sure that's what it sounds like to non-Evangelicals and non-Christians (and many Evangelicals). It's rough, but those on the outside of the situation don't understand it - and risk getting involved only at their peril.
But we're family. Sometimes literally.
As in, my brothers and I are all evangelicals and we all are or have been impacted by the Neo-Reformed movement. Only recently have I moved to a different way of interpreting the bible.
But we still all worship a crucified and risen Jesus. We still believe in a creator and creative God who hangs the firmaments of the heavens in place. We all believe in miracles, in a triune God, in a virgin birth, in the coming presence of God. 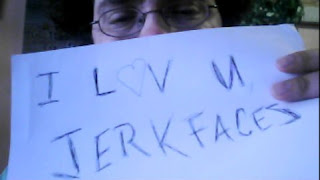 We all still believe that God's salvation is the answer for peace in our impoverished, neglected, and violence-prone neighborhoods.
And we all believe that God has cursed the Cubs, so that it's time to move on...
We differ on our hermeneutics, for sure, but we all believe that the bible is the inspired Word of God and that it should be taken very, very seriously. As a result, we all try to live by the book and love God and our neighbors to the best of our abilities in whatever function we feel is right for us.
And, despite all else, God loves us immensely.
Written by jasdye at 9:04 AM