The Destruction of Potted Plants (I)

Pt. 2, Pt. 3
My primary plant is ivy. Partially because ivy reminds me of my old home on the north side of Chicago. It covered the brownstone like an exoskeleton in the winter, an old, leafy friend in the summer. And the ivy also represents, in Chicago at least, Wrigley Field. Wrigley Field itself (not to be confused with the home team that happens to occupy Wrigley) is the last bastion of hope for baseball as it was meant to be played - as the ultimate beer garden; a deliberately rural-esque past-time in the midst of an urban and rushed setting. Which is how I envision my plants to function and exist. 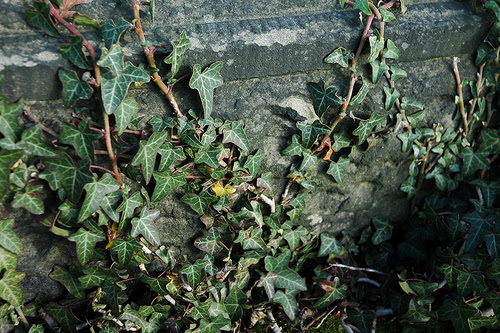 
Not as an image of beer gardens, so much – but as a pastoral icon – a reminder to slow down and enjoy your days while you can. The ivy (at home and in the classroom) reminds me that life and growth happen all around us, even in inept and regrettable situations. Like the Cubs organization and the overgrown frat boys who infest the spot like so much used hygienic products. No disrespect mean to used hygienic products...

My first classroom came pre-fitted with potted plants. To this day, I don't know what type they were, only that they - like cockroaches - could theoretically outlast a nuclear Armageddon. They were nearly indestructible, which they needed to be at the time because they were under my care. I think they were a variant of purple cacti, with leaves that dry up under the hot summer sun. I soon realized that these thingymabobs are so hard-to-kill that all I needed to do was water them on a regular basis and they were fine. And when I say, "regular basis", I mean, "once or twice a month if I remembered." Or course, they never lived up to their full potential. Which reminds me of too many report-card conferences.

Second grade Teacher: Jason is a very smart and capable young man.
Mom: Why, thank you. (Pregnant pause) But, what else can you say about his progress?
Teacher: He doesn't live up to his potential.
Father: That's what we figured.
Jason: (Scratching the back of his pants.) This doesn't sound good.
Father: You're right. And it won't sound good on your behind either.
Jason: Oh, drats! (Pulling up underwear from the back.)

This scene repeated twice a year for most of the rest of my formative education.with slightly altered language as I was further removed from my "Leave It to Beaver" years.College was different primarily because I was not in a mood to squander perfectly good money that I either earned or borrowed and would pay back through several years of incremental payments. These loans would, I knew even then, come back to haunt me like Kathy Lee Gifford haunts Regis. Cryptic envelopes, monthly payoffs, promises of eternity, ill-timed phone calls.