My Little Drum - Vince Guraldi Trio. Since when didn't this album somehow land on a random list? From the opening notes, my wife cooed. I can't complain.

King Kong - L. A. Symphony. One of their most fun tracks, with a Run-D.M.C.-esque backbeat. And a bendy-saw rhythm.

He'll Do It - Fred Hammond. Not too happy with this album, his latest, Free to Worship. But then again, most of his albums (with the exception being the live one) took some time to grow on me. But there was always those two or three that thrilled me from the beginning. I'm not so sure... This song's got a definite '70s rock/soul vibe, kind of a bit of tasty bits from EW&F. Ok, maybe we'll give it some more spins.

Running to Stand Still - U2.

Lifeboat - Steve Taylor. The clown for the CCM set did a Mrs. Doubtfire long before Medea did. Not a favorite - musically, it's painful, and then there's the non-hilarious image of a cross-dressing grown man - but the lessons about the culture-of-life and the value of all life are priceless. More of a learning skit, which it succeeds as, than a song.

Black Rage - Last Poets. Yeah, it's rage-erific. "Grenades in their eyes./ and death is their prize... They are armed, standing on the corners... ready to explode at the slightest touch."

Stuck Between Stations - The Hold Steady. See? I'm being honest about what's playing. Even if I can't stand the over-hyped crapola.
Written by jasdye at 9:05 PM 2 comments:

Email ThisBlogThis!Share to TwitterShare to FacebookShare to Pinterest
Labels: music

What am I Lenting? Help me to find out!

Tommorrow marks the beginning of Lent, as anyone who is a Christian and -unlike me- is not a non-denominationalist should know. (I'm guessing that Eastern Orthodox guys are all screwed up too, due to their screwy week-late Easter celebrations and all.)

But I don't know what to fast this year. Food as wholesale (even for, say, daylight) is out of the question. Maybe I can, but I tend to get short during those periods. And I don't need to get any more impatient or angry. Not at work.

Maybe I can fast from work.

Ok, what about coffee? I didn't do any prep on that. I dunno. Sounds sketchy. I never feel like I get enough sleep.

I wonder how many wimpy Christians (like me) refrain from coffee drinking during this period. Must put Starbucks and the big coffee international corporations on a dip. They refer to Lent as "the Lean Months." I can hear trembling in an office in Seattle, "We're going to have to temporarily lay off about 1/3 of our work force for forty days. Slowly bring them back during the week after Easter."

I need to blog more, not less. So that's out of the question.

I don't watch tv, except for The Office, which I catch on my iPod.

What's your choice? What are you Lenting this year? Are you? What should I Lent?
Written by jasdye at 4:04 PM 6 comments:

A couple of weeks after reading sociologists Christian Smith's excellent piece on horrendous number-crunching by evangelicals, I come across this trite, strident piece of garbage on my Yahoo! front page. Apparently, evangelical Christians aren't the only ones playing fast and stupid with numbers, or questions. To ask, "Is America too religious?" (as the people behind this poll/blog by Yahoo and ABC News did) is extremely problematic, divisive, polemical and, let's face it, bigoted.

I'm sure we could all think of different ways to phrase that question that would expose what a fraudulent way of thinking that is.

The problem with such polemical questioning is multidimensional. At its base, firstly, it's a yes/no, either/or, question, offering a simplistic take on such a wide-range over-laying topic. You either side with religion or you don't, the question assumes. It's almost mathematical, a type of modernist dilemma. In-or-out, true-or-false. But religion is a man-made construct, a vehicle, if you may. It's like asking, 'are there too many comedies on television' (with the assumption that they're all Two and a Half Men, without acknowleging a Cosby Show, a Seinfeld, a Simpsons), 'are there too many websites on the internet' (with the assumption that most of them are hokey or pornographic, without regard to many useful blogs, uploaded literature and resource pages), 'are there too many books in the world' (with the assumption that they're all Harlequin romances) - without regard to the quality or diversity of those in question.

Secondly, the question is constructed (even with the bottle-neck yes/no at its apex) too broadly. Is the issue at hand related to politics (as suggested in the introduction - the fear of some sort of unchecked theocracy falling upon the American public by the current incarnation of the Religious Right in the White House)? To the morality struggles played out in public (think of an outed mega-church pastor and leader being 'cured' all of a sudden)? To the effects that religious morals have had on our laws and ethics (or, as Dwight Eisenhower has said, "I don't care what religion America has, we just need one.")? To personal and communal piety performed in the public square (the Amish response to the madman killer)? To daily offices? To liturgical practices? To eschatological views (Left Behind anyone? Please?)? To ecclesiology (should the nation be concerned about who are the new and next pastors?)? To ecumenicalism (the gathering of various faith-traditions)? To the perceived threat of holy wars? In other words, what aspect of America is under seige here, is under the possible threat of being too religious? And secondly, what is meant by the term 'religious'? This general vagueness is a sort of double-threat. And I could understand why people may read and respond to this vagueness in a defensive manner - whether pro or con.

The real question should be, Are there too many idiotic and inept questions proffered by the mass media?
Written by jasdye at 7:10 AM 5 comments:

When I was in high school (with Father Abraham, of course), Prince's birthday was one of the biggest non-official holidays - the others being Valentine's Day, Halloween and, of course, International Cutting Day. Girls of all colors and creeds would unite to wear purple, and ocassionally swoon even as the Purple One himself was denying his Warners Slave Name and picking up a new symbol - based on that extra chromosome running around in his chapless genes - for his new name.

So, it seemed ironic to me that at the smallest Super Bowl party in Chicago this year, I found myself defending Prince against a couple of women. I was vastly outnumbered, but I tried to quiet my wife and hostess (not always a good idea, mind you) and educate them on the sweet goodness that was coming out of that man's guitar. Not to mention the songs, the percussion, the stripped-down production (just his old name-thingie, a handful of guitars, Sheila E.[?] on drums, a lit-up college marching band, somewhat clumsy and distracting dancers, a kerchief on his head [is he still mad at Warner?], and fireworks at the end), the lively way he cut into that guitar demonstrating that not only is his name Prince, and he is funky, but he can play the guitar just like a'ringing the bell. And it added a bit of effeminate coolness to the game (unheard of the last time the Bears played of course). But coolness, nonetheless. This is the man whose music provided Jack Nicholson's entrance in Batman, after all.

And so his version of CCR via Ike & Tina's "Proud Mary" and Dylan sans Jimi "All Along the Watchtower" may not have been perfection (the volume was, of course, low on our set, so I can't be sure), but it was a thing of beauty. I'm of course referring to the music, not Prince. 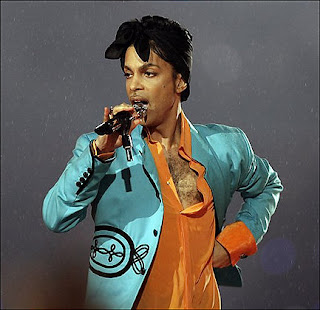 Try not to stare too hard for another NippleGate.
Then again, he was wearing Bears colors. Lovie should wear that on the sidelines next year.
Written by jasdye at 6:06 PM 4 comments:

I Want to be a Clone

My wife, on the other hand, shares her name with eleven other US citizens.
Written by jasdye at 8:59 PM 3 comments:

Email ThisBlogThis!Share to TwitterShare to FacebookShare to Pinterest
Labels: Name

Early on in the season, Rex Grossman looked like General Sherman, burning bridges, railroads and defensive units in his wake.

Increasingly lately, though, he's looked like General Grant. After the war. In the presidency.

If we had kept the run going, with only a few long bombs, we should have easily had that. But it's lost now.

The good news is, my wife still loves me. We've still got a beautiful baby on the way. And Jesus loves me as much now as 32 years ago.

It's brutally cold, so cold you have to feel alive. I have a job, so does my wife. I've got great friends who care for me. I live in friggin' Chicago, U.S. of A. I'm drinking hot cocoa. I had a gypsy skillet from Cozy Corners this afternoon. I have a full fridge. I wear clothes. I have too many shoes (much more than when I was a youth, with one pair a year). I'm in a position to help others. I'm a teacher, teaching in my dream school. It takes all of my fingers to count all of my toes - ten; no more, no less.

I guess it's not too bad.

The Mrs. jasdye and I are celebrating our first six months as a married couple today (wait for it... wait for it...). That's right, it's our halfiversary!

And today is the first time our lovable Chicago Bears play in the Super Bowl in 21 years.

O, my heart is torn.

I know where my loyalty lies.

On the side where I WON'T get a rolling pin thrown at me.

And the wifey is gracious enough to watch the game with me.

The show was delightful. No, no. It was brilliant. No, no, no, no. There is no word to describe its perfection, so I am forced to make one up. And I'm going to do so right now: Scrumtrilescent! - Will Ferrell as film expert James Lipton on Saturday Night Live *

We had to finish off the beef last night, and I was tired of the old stand-by's: cheeseburgers, spaghetti, tacos, chili, etc. (even the scratch and Rachel Ray varieties). So, I just started putting things together. But, I think the basis is a chili recipe.

The spice rub was a homemade blend given as a Christmas gift by some friends. So, I really don't know where to get it from. But the idea is to rub it in to the meat before cooking it. Brown the meat. Add the sauce, tomatoes, and beer. Simmer for 10-15 minutes.

In a separate pan, bring water, salt and olive oil to a boil, add shells, lower heat and stir occasionally for 12 minutes (or until done. Whichever is first. Like I know). Drain. Put cheese in and cover for four minutes.

Add the extra spices to taste while simmering the meat. Put 'em all together and enjoy.

* H/t to Jeffrey Overstreet for that quote.
Written by jasdye at 8:48 PM 2 comments: