The title for this series is taken from the remarks of Oklahoma state representative Sally Kern when the legislators were discussing whether and how to get rid of affirmative action in the state:

“We have a high percentage of blacks in prison, and that’s tragic, but are they in prison just because they are black or because they don’t want to study as hard in school? I’ve taught school, and I saw a lot of people of color who didn’t study hard because they said the government would take care of them.”

Kern said women earn less than men because “they tend to spend more time at home with their families.”

Minorities are lazy?
Before I go any further, I should make note of the fact that I'm white. My grandmother is Puerto Rican. My step-grandfather is Filipino. But I'm so Northern Euro that my daughter is blond, I will end up burning and peeling like an orange pretty soon, and then my will hue quickly disperse into freckles like shattered glass.
So, while I have been pulled over for being in the wrong neighborhood - usually mine or my friends', and at least during one point, mercilessly and sexually humiliated by the officer - I’ve never actually been the victim of actual racism. When I say “racism”, however, it means something a bit different than the classical version of racism that most in the mainstream think of*. Largely because that type of racism has been buried since Archie Bunker in American society (although in many respects, latent racism has come to the fore since a black man became president. Many of my friends can testify to this from personal experience. Of course, all one really needs to do is turn on the news to see someone questioning President Obama's American-ness, or his intelligence. Or photoshop him on a picture of a witch doctor. Then there's the monkeys, watermelons, nearly everything that comes out of Newt Gingrich or Rush Limbaugh's mouths. dot. dot. dot.). It is politically incorrect, for example, to use derogatory terms for black, Latino, East Asian or Southeast Asian, or First Nations** people. It is widely considered offensive and taboo to tell a black citizen to move over for a white citizen. And trying to keep a minority from voting on the basis of a test will get you in trouble with the law.
However, if that black person himself got in trouble with the justice system, laws are set to explicitly ban him from voting. And the chances that a black male will end up imprisoned are more-than-curiously high in the US. Furthermore, although slavery’s long been outlawed, darker skinned Americans tend to work for significantly less than white laborers do - that is, when they are hired. Black and Latino men (especially) have difficulty finding jobs, period. And twice the percentage of black men as white counterparts with comparable education and experience are unemployed. 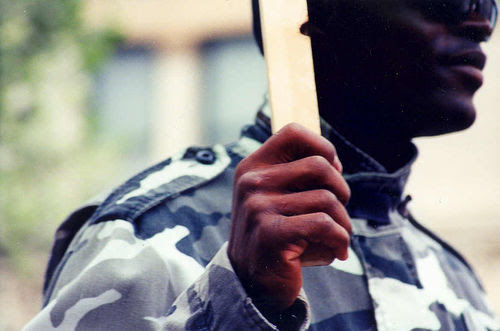 photo © 2005 Elvert Barnes | more info (via: Wylio)When the subject of racism comes up, white people always - always - put up their defenses. The first and most outlandish one is, "I'm not racist." Which is a bit of an odd deflection. But maybe it's not a deflection. Maybe the person who says this feels that he is being attacked. It's just that that is rarely the case. Typically speaking, white people have our wires routed differently about this topic. So when the topic of race comes up, a white person who is not as familiar with discussions of race and racism (yet who belongs to the majority culture which gives him or her advantages that a person of color will not receive in this society) will tense up. To be honest, it quite physically hurts - as a white person - to be even hinted that we could be racist. It's not unlike being suggested that one is a child molester. Guilty-until-proven-innocent. So I can understand the defense. But at some time we need to drop the defense and listen to what is actually being said.
Second, and worse, is the defense usually given by people ACTUALLY accused of racism: "I have lots of black/hispanic/latino friends." Let's take it at its face value, however, and try not to laugh at the absurdity of them calling someone that they just degenerated in front of thousands of people "friends"... Let's say that he does have a few non-White friends. Does that qualify him as a not-racist? If a man has a wife and a mother and a daughter, does that mean that he can't be a sexist? Does that disqualify him from chauvinism, or wife-beating, or spousal abuse?
Third, and this is the one that I run into most often is the shock (shock!) that America or society could possibly be racist. Since we don't see a Sheriff Bull Connor chasing down black school children with rotweillers or water cannons, then racism is no longer tolerated in this society. If anything, they argue, the government practices reverse racism by allowing for affirmative action (which some argue is a soft form of paternalism), which discriminates against whites.
But when we look at the inescapable fact of the high proportion of African American and Latino males (and females) that are incarcerated, the ghastly high proportion of African American, Latino, and First Nations people that are in deep poverty, the apartheid state of American education and housing - we run into a tension. Do we still believe that there is no societal racism, do we still believe that the cards are not stacked against people of color? Do we believe that it's a problem of the lack of preached personal responsibility in the black, Latino, and indigenous communities? (Although those virtues are preached probably more in those communities than in white communities, from my experience.) Do we find other factors, such as the War on Drugs that criminalizes large portions of black youth? (Although as high a percentage of whites use and abuse drugs as people of color, yet people of color are checked at unbelievably higher percentages. That is, it's generally higher than us white folks seem to comprehend). Do we believe that the lack of perceivable African American/Latino success is a result of the acceptance of culture-wide victimology? (Although only a handful of black and brown youth - even now - consider their status as colored in America as being that they'll have to work harder, not less, to achieve success.) Or do we remain silent, thinking, however briefly, however under-our-subconscious, that the problem is inherent within that people group?
Seriously, how do we reconcile what we see with our beliefs of who should succeed in American society? How do we reconcile the piss poor way black men and youth are treated by our justice system with our understandings of how the justice system is supposed to be fair and just?
From my experience, part of the problem in this impasse in the whites and minority dialog is that we white folks don't raise our children to recognize and shield themselves from racism. So we come up late to recognizing the system of oppression as it stands. I grew up in a multicultural family, multicultural communities, multicultural church, and multicultural schools - but it wasn't until well after high school that I realized how hurtful some of my words in regards to race relations were. So I don't expect that (or, really I shouldn't expect. I am a little impatient, to be honest) the majority class will immediately grasp our failure in this matter. Further, it's hard and hurtful for our friends of color to have to put up with our mistakes, time and again. Especially if they have a history themselves of being ignored and invisible. So don't necessarily count on them to do the corrections and the history lessons.

You may need to bone up on that stuff on your own. Y'know, read some racial history; listen and begin to trust the words of people of color; bone up on some scholarship; spend some time with your minority friends - without an agenda; realize that there is no singular voice for minority cultures - that it's as wide and varied as our own white culture; invite others into your life and surroundings.
--------------------------------------------------------------------------
**Commonly, I use two meanings for racism - individual and institutional - but the fundamental meaning behind both of them is the idea of enacting power over a person or people of a different race or ethnicity based on preconceived notions of the inferiority of those within the race or ethnicity. Typically speaking, the dominant culture (eg, Whites in America) are not the recipients of racism.
**One of the biggest concerns for some is not to sound too politically correct. And I can understand that concern, if by that we do not mean not being able to say anything that might be construed as offensive (I honestly don't know where the balance is for that. But I would say that if you're going to say something about another group in public, be aware that others are watching and may call you on the carpet for it. If you don't want to be called on the carpet for such comments, educate yourself), but rather this constant change of vocabulary to what is considered the less offensive term. But I believe in self-identification.
Some of these terms are understood in a mostly regional manner. In Chicago, the term those of Latin American descent tend to use for themselves is "Latino". I've heard few indigenous people refer to themselves as Native Americans, but have heard Indian, First Nations, and most commonly by the specific tribe they are a part of.
Written by jasdye at 3:40 PM