Maybe I've got too much free-time*


These are the movies I’ve seen for the first time over the last two months, as best as I can remember them:

The Last King of . Much like the amoral, fictional and young Scottish protagonist of this story, this film lusts ‘em and burns ‘em. Which is representative of the colonialists’ approach to that the movie highlights. Forrest Whitaker deserves an Oscar, if the Oscars had any balls about them. Which they don’t. So, I don’t care, except to say that his portrayal of prototypical dictator Adi Amin is brilliant, as is the Fela Kuti-inspired soundtrack.

Ice Age II: The Meltdown. I missed the first installment. Maybe I would have enjoyed it more if I had seen the first. The squirrel (what’s up with the squirrels in these anamorphic movies these days? Why are they all high-strung comic foils? And why do I fall for it every time?) and the primitive, volcano-worshiping slug tribe are easily the highlights of this meandering project.

. I found this top-secret Spielberg-directed post-9/11 study on the wages of vengeance (appropriately based on a book titled Vengeance) to be more relevant to our world today than, say, United 93. No particularly riveting performance (With the sole exception of Eric “It’s the Hulk” Bana - No stars, thank goodness! I didn’t realize that Daniel Craig was the heavy until the movie ended.), only obvious and sad revelation after bloody and needless revelation.

The History Boys. It’s a good thing this gay love triangle talkie is tempered by a clash between old methods of teaching (as in, teaching for life and “burying our graves”) vs. the newer, administrative-directed and results-oriented methods (in this case, literally teaching to the test). Hence, the title’s two parts: the history of teaching history in the making and - as is the case with so much off-Broadway – boys who like boys.

It’s Christmastime Again, Charlie Brown. (Ok, technically not a movie. But as "Boondocks "creator Aaron McGruder notes, these seasonal specials aren’t made anymore.) Much like Napoleon Dynamite and the strips that this tv special was based on, most of the four-panel stories only serve as loosely-themed vignettes. Still, even though Shultz’s schtick was wearing thin by the early ‘90s (I vividly remember bemoaning the recycling a few years before his death), minor Charlie is still a giant among mortals.

Monster House. I read a review that quoted another reviewer that chastised the male executive producers (Spielberg and Zemeckis) for creating a monster that’s basically an angry woman with an angrier ummm… hole. But credit also goes to the filmmakers (of which a minority of director/producers, if memory serves, is female) to making the first animated horror film for kids that I can think of – complete with a kiddie ending that takes most of the horror out of the rest of the movie. Which, honestly, is fine by me.

Happy Feet. A cute ugly-duckling fable is ruined by a too-cute, reductionist third act. But it got the little ones in the theater on the night after Christmas: SRO some three weeks after it was released.

Hoodwink’d. Hands down, my favorite animated movie of the last year. Maybe one of the best movies I’ve seen within the last year, for sheer force of energy and comic sensibility. Maybe I was just taken in by its cleverness (and significant movie in-jokes), but much like Shaolin Soccer last year, the lack of pretentious depth and ridiculous gags just kept me in high spirits.

Email ThisBlogThis!Share to TwitterShare to FacebookShare to Pinterest
Labels: Movies

It's cold outside. Why am I going out there?

Just coming back from Christmas with family. I'll be leaving shortly for a little camping excursion with the guys into the frigid and unforgiving northern midwest winter. In case I don't make it back*, these are some of the posts that I'm planning on releasing over the next week and a half:

Top 6 albums of 2006 (very little may be surprising);
A roundup of movies I've seen over the last two months;
A reflection on the overriding cynicism of Christmas/Holiday movies;
An essay on forgiving those who aren't forgiving and don't ask for forgiveness;
A book roundup of late 2006 (which may or may not turn into a Top 6 list).

*My wife and unborn Baby J get everything. Not that that's anything to brag about to anybody...
Written by jasdye at 8:55 AM 4 comments:

Some fifteen years after the prophecy, James Brown is dead.

In all seriousness, condolences to all. May you be the Hardest Working Man in Heaven now,
Written by jasdye at 4:09 PM 1 comment:

From the second Charlie Brown Christmas tv special (the one nobody watches):

Charile Brown: Would you like to buy a nice Christmas wreath?
Potential Customer: Oh, I see that you're adding to the commercialization of Christmas, Charlie Brown.
Charlie Brown: Not yet! I'm trying to. 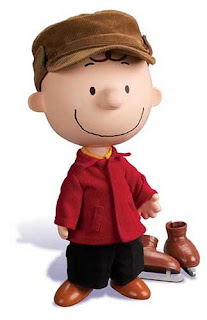 I've always thought that the buying and giving and receiving and all that was merely a backdrop to the family gatherings, which I always found more fun and longer-lasting than the cheap RC race-tracks I used to get. I guess it's nice to think you're doing something for the ones you love, to show that maybe you know a little something about them, that maybe you're on to their tastes and sizes.

But that's hard, and we spend a lot of time in a post-Christmas blue period at the return register. So, yeah, gift cards are a necessary evil. Kind of like voting. But at least we know what stores to buy from.

P.S.
The new Over the Rhine Christmas CD, Snow Angels, is in the running for top of my year-end lists. It emphasizes best what I like about Christmas better than I can. Although every song on there is, as far as I can tell, a new composition, the songs are heavily borrowed - as in the remake of "O Little Town of Bethlehem" that becomes simply "Little Town", the Guaraldi-themed shuffle "Goodbye Charles" and several themes from earlier OtR records (such as the downward bass slides found in abundance on their masterpieces Ohio and Drunkard's Prayer and here on "All I Ever Get for Christmas Is Blue" and the rollicking uptempo numbers from DP). This mix of familiar and novel leads to a fresh nostalgia, a living memory. And really, isn't that what Christmas is all about? Isn't there something wonderful about the words "incarnation", "hark" and "glad tidings of good news"? Isn't there something wonderful in retelling old stories and making them new a hundred times?

Or is it just me?

Merry Christmas from us.
Written by jasdye at 10:06 PM No comments:

Love the ones you're with.

I don't know what that means.


I haven't had much of an opportunity to do blogging recently, although I've been (lazily) working on a post about grace and forgiveness for the last month plus. I keep thinking that it's going to be this masterpiece, that the world will see true genius when they read my blog. Everyone will stop their partial and close-minded bickering and, in keeping with the spirit of the wise men, offer me lavish gifts. I would, humbly, graciously and self-consciously, turn them down. Frankincense and myrrh I could do without.

Yeah, I've been reading too much David Sedaris recently. Not that there's anything wrong with that.

The experiment now, though (since Christmas time is upon us and students are generally more jovial and less destructive), is to read large chunks of Sedaris' Holidays on Ice. So far, so good 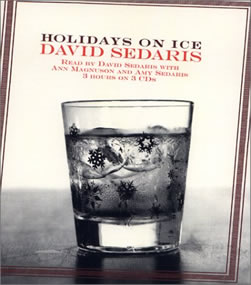 The truth is, though, I'm often tempted to drink from the glass on the cover while I'm reading it.

Christmas break is upon us, folks. I'll be back shortly.
Hopefully.
Written by jasdye at 8:07 PM No comments:

Christmas Music edition. BTW, my wife asked me to download a bunch of Christmas music. Although she really wanted the more lilly-white traditional stuff, I was able to sneak in some extras. (Without equivocation, however, the Vince Guaraldi Trio's Charlie Brown Christmas is THE epic, the paramount. All others need to bow down.)

Another Sunday, another questionable Bears game.