This probably won't be so heavy as to justify being titled a rumination, but just a really random collection of ideas from Rob Bell's Drops Like Stars event last night.

The circulating and connecting ideas were on creation, hurt, boredom, purpose, art, life, incarnation and the many ways that these truths are interconnected and how we are connected because of suffering and the art produced thereof.

We can own yet never possess. And we can possess without ever owning. As an illustration, he points out that he owns a high-end Rickenbacker. And occasionally he'd strum madly on it, but not with any sort of expertise. A friend would come in and make the guitar gently weep (my words, well George Harrison's words, not his). He and his wife own a painting, but a friend came by and was completely in to the painting, delving in all the wonderful intricacies that are in the frames of the frames on the canvas - areas and subtleties and nuances and colors and themes that the owners weren't even aware of...

Because of the incarnation, no one could ever say to God, "But you don't understand what I'm going through..." Incidentally, one of the most powerful sentences you can hear from somebody else is, "I understand your pain." 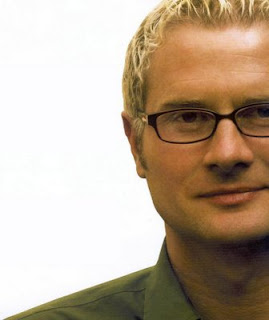 Are we bored? Are we living somebody else's life? Do we not know how our lives could be filled with purpose? It's through love, through helping others. That's how we fit into a larger, cosmic purpose set out before us, long before our time. God designed us to love, to feel each others' burdens, to pick up our cross, to delight to be of service...

If you can, I'd encourage you to go see it. Chicago was the first stop. If you see a bunch of weirdos walking around in black Michigan-shaped T's, follow them around... I just think it's a great experience to hear freshness again.
Written by jasdye at 9:02 PM 3 comments: 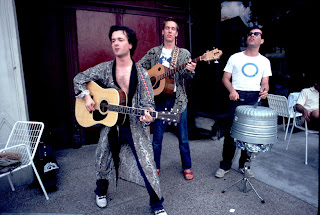 another random shuffle, sukas! Set your iPods (or comparable player, in my case, my iTunes player) to shuffle and transcribe the first 25 that come up. You're on the honor code, so no skipping over those teenage girls that you pretend you only have for your nieced and no skipping ahead to some no-name band that quit after its first show thereby granting it instant twirps-in-tight-jeans cred.

Beverly Blvd. - Pigeon John
Ghost of the Heart - Daniel Amos
Droned - Starflyer 59
Jesus Be a Fence Around Me - Fred Hammond
I'm Cool [Interlude] - Stankonia
Presence of the Lord - Blind Faith
Noah: Me and You, Lord - Bill Cosby
One and the Same - Deepspace 5
Axe to Grind - Deepspace 5
I'll Be Around - Duvall
Everything's Just Wonderful - Lily Allen
Can't Stand Losing You - The Police
Theo's Logic - Daniel Amos
I Get a Kick out of You - Frank Sinatra
Thought Managerie - Sixpence None the Richer
Freedom's Child - Billy Joe Shaver
Blank - Violent Femmes
Whitey on the Moon - Gil Scott-Heron
New Way to Be Human - Switchfoot
Rock You - The Roots
Blank - Violent Femmes (yes, that came up twice. What am I supposed to do about that?)
Boplicity - Miles Davis
Blue Monday - New Order
Greater Is He in Me - The Crabb Family (Get your minds outta the gutters, folks. And no, I'm not a fan of Southern Gospel)

Good ness! There is a whole lotta music by Christians on this. Even one of the 'secular' songs is a Gospel song. Fortunately, nothing embarrassing showed up (wouldn't want y'all to believe that I'm still listening to 'Luv Is a Verb' or 'The Champion' now) - at least nothing that I'm embarrassed by - until the end.
Written by jasdye at 10:34 AM No comments:

We are called Jas Dye for we are many

The makers of Facebook are both astute businesspeople and complete nerds. Now, most astute businesspeople are aware that in order for their ventures to succeed, they have to do well in the minds of their customers. However, it's becoming clear that the Facebookers-that-be have figured that if we're busy making and becoming friends with real people on their network, then we won't be able to find out just how misanthropic they really are.

They have no direct customer service. Instead, they have set up a system where everything is run into a complex computer database and program - their reactions and fixes are based on logarithms or logosrim or latinrhythhms or whatever you computer geek friends call it (here I use "geek" in a nice way!) - and they find it cheaper and more effective to run their galaxy from afar and aloof, like a non-vampire Rupert Murdoch. But who can blame them? With such a large, exponentially-growing network, why should they be pestered by the cries of their individual customers anyway?

Now that I got that recently discovered background out of the way...

Recently, when I've left comments on status updates, occasionally a window would pop open and warn me that their loggorheia is telling them that I may be annoying or pestering to some. Fine, I think. Checking on the 'information' link they send me, there's nothing - as far as I can tell - that is applicable to me (unless I have sent out malware unawares). They warned that if I continued in my actions (which were unclear), that they would be forced to discontinue my account.

However, I had to ask: Is it likely that I've been annoying people? The answer: Does a bear poopoo in the woods? Do I write a lot of comments? Is Facebook my main source of social interaction? (How did introverts ever survive before social media? What's that? Monasteries, you say... Hmmm...)

In response, I commented less and less, yet the pop-up window threats were appearing more and more. A couple days ago, I got sent an automatic email that made the threat very clear and very present. They are going to shut down my facebook account!! I was anxious!! Oh no!! Somebody stop me!! I really like Goose Island's Honker's Ale!!

I figured that even though I would have to start a new account very soon, I really did not want to have to start it over from scratch. I should probably have an overlap period of time (give it about a week or so) where I could pull from the old account and then shut it down... for good (or bad, really).

Obviously it's a bit of a waste of time for me, but the alternative makes less sense - especially since I use the site for networking as well as retaining and expanding upon friendships.

And That was pretty rambling...
Written by jasdye at 8:13 AM No comments:

My life through the hidden, hidden songwork of Adam Again

Rules:
Using only song names from ONE ARTIST, cleverly answer these questions. Pass it on to 15 people you like and include me. You can't use the band I used. Try not to repeat a song title. It's a lot harder than you think! Repost as "my life according to (band name).

Pick your Artist:
Adam Again - Obscure to many but other obscure, independent-minded, underground-ish musicians and music lovers toiling in the CCM industry (many of which I am peeing my pants that I'm so happy to fb-befriend), the late, great Gene "Eugene" Andrusco & Co. released a wonderful and neglected album called Dig. And a handful of other wonderful albums as well. But I've blogged about them again and again. For now it's just silly blog filler (until later this week when I do the same thing with other fatally-neglected underground CCM genius songwriter Mark Heard).

Are you a male or female:
"Homeboys"

How do you feel:
"Relapse" or "No Regrets"

Describe where you currently live:
"This Band Is Our House"

If you could go anywhere, where would you go:
"Hide Away"

Your best friend is:
"All You Lucky People"

You and your best friends are:
"Eyes Wide Open"

If your life was a TV show, what would it be called:
"Dig"

Your relationship:
"You Can Fall in Love"

Your fear:
"River on Fire"

What is the best advice you have to give:
"The Trouble with Lies"

Thought for the Day:
Is "Deep"

How I would like to die:
"Bad News on the Radio"

My motto:
"Worldwide"
Written by jasdye at 7:31 PM No comments: