The Destruction of Potted Plants (II)

pt. 1 here, pt. 3 coming
There were some fights in that classroom. One fight occurred in the passing period, between two hot-headed students who each would be involved in several other verbal and physical fights the next two years. It started in a flash (although I suppose the warning signs were there if I had known how to search for them) and effectively ended when I was able to wrangle the struggle to the other side of the room to waiting security. I don't remember much else about that confrontation. I don't recall if there was further action directly related to that fight - though I should, by any rights, know. And I don't remember if other students were trying to get involved with the fight (though I doubt it), were trying to stop it or were merely passively awe-struck by it.

But I do remember the toll that the wildly swinging appendages took on the nearby plants. Because that was all I could bring myself to focus on. I remember looking at the floor and being angry at the destruction of my potted plants. And yet I missed the big, easy picture - the metaphorical writing on the wall, if you may: the destruction of the idea of the classroom as a safe place. The two students (as volatile as they proved to be) exploded primarily not over property rights or religious views. I don't think they were arguing over who makes the best frozen yogurt.

They were both at the precipice of fear and danger and one nasty or innocuous interaction led to another, escalating to the boiling point. At this point their own sharp-edged, protective words and body language were not enough to make them feel guarded from the dangers that they represented to each other. They would reconcile their apprehension at each other with many moving fists and pointy appendages. 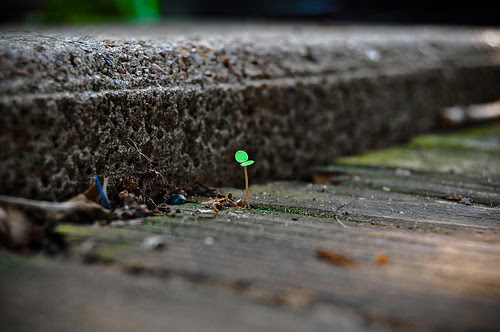 
The students' social interactions were not cultivated properly. And for this, I sit here, at the center of the blame. I am responsible.

I cannot release myself. I cannot excuse nor recuse. The fact is, as much as it is needed in my environment, I do not know how to greenhouse my students.