And the Violent Bear It Away

There is no place for violence. But violence has no mind, so it doesn't mind. It makes its own spot and throws everything else to the ground. It is the ultimate parasite, feeding and growing and bloodying itself while sucking the world dry. The Great Impaler. The Alpha and Omega of vampires.

Violence is unremittingly evil. It is a scourge, and it doesn't matter who commits it nor whom receives it nor whether or not the recipients "deserved" it or not in this regard: It is always an evil.**

Violence shows itself unremittingly and unforgivably in every battle field, through each bomb, in each bullet, via each threat or word or war.

But war is not the only form of violence.

Can we agree that, whether or not violence should ever happen, that when it does happen, it is wrong and evil? Can we come to terms that violence should be avoided as much as possible? Can we at least agree that we need to reduce violence, that our children should not have to be subject to repeat violence and that the effects of violence upon us and particularly our children is damaging to individuals as well as in social functions?

Can we see to it that violence is mitigated? Can there be a social force rising from deliberate and vigilant groups and communities of people to meet and turn these forms of violence on their heads? Who will rise? What will our answer for violence be? Who has the answer? And what does that answer look like?

Seriously. I wanna know.
------------------------------------------------
*This includes any form of non-consensual, coercive sex between an adult and another adult. Child molestation, bestiality, date rape, and - to a certain extent - forcing your spouse/significant other to have sex with you or risk incurring God's wrath. I'm looking at you, Mark Driscoll and any fellow Complementarian Christians who teach this.

**I want to make a very important distinction here. The effect of violence needs to be accounted for in terms of power, and that is what I wanted to get to here. The power that a colonial/imperialist nation commits over tribes or adults over children or men over women or police over civilians, etc. Defending oneself from a clear and present danger - unless done in a lethal manner - should not be construed a form of violence in itself and - when it causes less overall violence than what would or could be done without defending self (or neighbor), then it is a good. But this gets more complex and may need some more clarification and nuance throughout. More than I can give here. The rape victim should never feel responsible - for instance - for not being able to prevent her or his own rape - yet that is often what the victim hears when such arguments are aired. So... I would like to continue this conversation in the comments section. Please, let's continue this conversation.
Written by jasdye at 7:00 AM 2 comments:

The Trouble with Powerful Men and Political Hacks

A couple weeks ago I read an interview where a hospice worker made an observation that how we live our lives demonstrates how we end our lives. Some go out fighting every step of the way; some go out peacefully; some with reservations. But you can generally tell how they're going to go out the way they've acted the last forty, sixty, eighty, hundred years.

I'm becoming convinced that Billy Graham's greatest downfall is his semi-worship of powerful men. Often, those powerful figures were presidents, from Nixon to Clinton and most inbetween (save Carter. Odd, that). These men often benefited from the relationships with one of America's most beloved and trusted public and religious figures. But now the most powerful man in his vicinity is his son, Franklin. 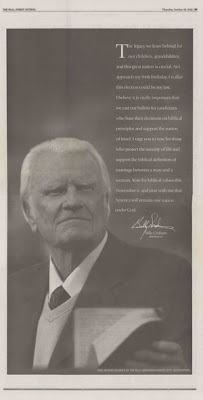 But Franklin doesn't have the advantage of being an actual politician who can inspire roughly half the population of the United States. He did not rise through the fire of political discourse and meddling and the tribulation of trying to please most despite the impossible odds. He is a political hack who only needs to please a certain (and generally white, privileged, male-dominated) Evangelical base. But he is shrewd enough to recognize that his father's legacy is stronger and wider than his will ever be. As long as he can ride those coattails, he will. As long as he can convince his locked-away father - who is losing breath and consciousness - that he is taking care of him and convince his followers that the words that are supposed to be representative of Billy Graham are actually Billy Graham's - such as the recent two-page ad in the WSJ.- then, glory be! Franklin Graham the scam artist/political hack can get away with destroying a legacy and helping to steal an election at the same time.

I'm convinced that's what's going on here. The problem is that Billy Graham has had this moral character failure (trusting powerful men) threading through his life, and that his son - a moral failure himself - is exploiting that.

Not only is Franklin Graham purposefully and sloppily burning through the last vestiges of respect that his father earned through a scandal-free public life in order to establish his own credentials within the Fundamentalist/Evangelical Moral-less Majority (because, really, what else does he have?), but Billy is letting him do so because he fundamentally trusts powerful men. I recognize that draw, sadly, because I'm wired to think that way too. Yet, I've been on the other side of privilege and seen what those same men have done to my non-white/non-male cis/non-middle class friends and family and neighbors and students long enough to recognize that Navin Johnson's father was right.

Especially if that whitey is a middle aged no-good-nic son taking advantage of his late-stage Parkinson's nonagenarian father.

Edit:
I hasten to add that I do not believe that the elder Graham is cognizant enough to know what he is ascribing his name to. Nor that he believes nor certainly says that which is being applied to him. I'm confident that Franklin comes to him, asks him to sign or if he will agree with some document or photo and Billy, not being fully aware but trusting his son, nods in approval, or some such way shows approval. Not of the content, but of whatever it is that he thinks that Franklin is asking of him. He trusts him that much. To his detriment.
Written by jasdye at 2:01 PM No comments:

Email ThisBlogThis!Share to TwitterShare to FacebookShare to Pinterest
Labels: homophobia, idiots in politics, Reasons why I'm embarrassed to be a Christian

The Freedom of Religion Argument that the Democrats Are Missing

The Republicans were right to frame abortion as a Freedom-of-Religion issue.

The entire "life begins at conception" concept is religiously-based. The US Council of Catholic Bishops, in arguing against being involved in the Affordable Care Act, merely demonstrate that they are upset  that their employees will have access to measures that these males religiously object to: birth control and abortifacients. And maybe even abortions.

Is that okay in any other field? Who would argue that Muslims have a right to make their employees pray to Mecca during the workday (unpaid time at that)? Or that a capital acquisition firm under Mormon leadership has a right to baptize deceased employees or dead family members of employees? Or that all school children should be made to participate in Christian prayers, or pledge allegiance to a civil religious god?

You wanna get a Republican angry with you? Tell him that in supporting the Diocese, the GOP is supporting group-think over the rights of the individual. They'll be angry - because they're hypocritical.

But then, that's a fair thing to say about nearly every person that's politically motivated. Politics is about power. And power corrupts. Most of us want more than we have - or we want to maintain what power we do have.

Perhaps the only person that is not in danger of being labeled a hypocrite is she or he that purposefully gives away or denies his or her own privileges? Or, rather, that has few to begin with and is only fighting for her or his right for basic liberties (such as access to basic health care). For instance, the so-called "Party of the People" rarely supports workers' rights - rarely defends the poor anyway. Let it be known that some of its major actors oppose teachers in the name of privatizing education. Actually, they're quite fond of privatizing for profit just about any public good  that can be unchained. Parks, schools, right-of-way, postal service...

Is that why they haven't brought up this objection?
Written by jasdye at 2:00 PM No comments:

Mark van Steenwyk on the un-Kingdom of Jesus from The Holy Anarchist:


Christ's kingship is inconsistent with traditional structures of power; and for this reason, Jesus tells Pilate that "My kingdom is not from this world" (Jn 18:36). Passages like these have, unfortunately, fostered an ineffectual other-worldliness among Christians. And they have been used to legitimate "real-world" kingdoms. Jesus rules some magical sky-kingdom, while princes and emperors can dominate flesh and land.

But Jesus' reign isn't other-worldly. It isn't apolitical. It's just political in a radically different way...

So, when Jesus said his kingdom wasn't of this world, he wasn't understood by Pilate or by the Jews or by his earliest followers as talking about the afterlife or some abstracted spiritual truth. Based upon the lethal response to Jesus (and the early reactions to Jesus' movement), the "Kingdom of God" was understood as a challenge to Caesar and his reign. Their two kingdoms clashed...

The social, economic, political, and religious subversions of such an un-reign are almost endless - peace-making instead of war mongering, liberation not exploitation, sacrifice rather than subjugation, mercy not vengeance, care for the vulnerable instead of privileges, generosity instead of greed, embrace rather than exclusion.

So, what DOES this unKingdom look like if it's not domination, not of war or exploitation, subjugation or vengeance, neither privilege, greed nor exclusion?

Maybe it looks like Jesus' sermons and illustrations. And maybe the opposite of that is worldly.

-----------------------------------
*Rather than the current manifestation of American Churchianity where we often say we love God and use "love" as a semantic weapon against others, telling them that, while we "love" them, they must conform to our dominating standards of what it means to be right or human or good. Which is not love at all, only greed and selfishness.