Pictures, so many pictures...

I'll try out Flickr in a little while, but for now, Picasa should do, eh?


To get the album of Jocelyn during her first week, click here.

So, what else have we been up to?

Cause someone around here has to sleep all day

and get fed for doing nothing... (says the summer vacation teacher daddy) 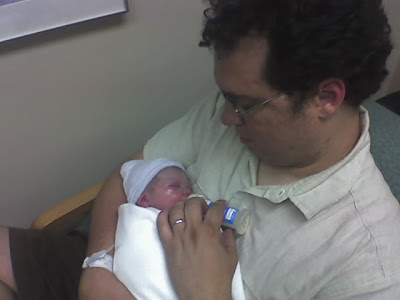 The little one is Jocelyn. Welcome, little baby.

Update I:
I'm going to try to keep as many people updated as I can about our baby and her condition(s) as I can, so I may be a little lagging in the info department here at times. 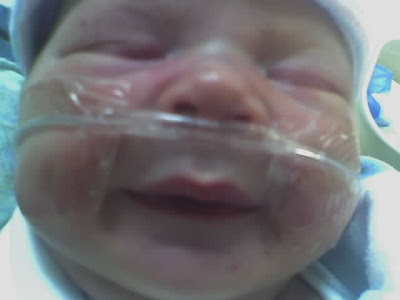 Our little miss chubby cheeks is hooked up to the oxygen tube here (and some other gadgets and vials) because she had some trouble breathing, she had/has some discoloration issues going on (at times looking like a little Smurfette, which is not as cute as it sounds, Jossie being human and all), and she was throwing up some mean stuff. So, she's on antibiotics and she may remain at the hospital for another week. Hopefully, nothing worse is happening, but the staff is constantly checking up on her and monitoring her and everything.

Today, she had another tube going down into her mouth, and the staff has been directed to not feed her for awhile.

And it's difficult being in the Neo-natal Intensive Care Unit and seeing our relatively healthy and full-term baby and not feeling a little 'wowwed'. And we are grateful. We can, for instance, hold her. But it also hurts deeply to see our little precious one in all these tubes and crying out of frustration, a very hurt cry.

We ask and hold on to your prayers. Thank you.

Mama and I are traveling a lot between here and there now. We can say that based on this evening's visit, our little pumpkin-head is doing so much better. She still has an infection (around the lungs, I believe), but everything else seems to be working fine and on-schedule for development (sounds like a project, eh?).

Still, we miss her here and long for the time to bring her home and hold her w/o worrying about popping off a tube or something.

On my way to an important (and always frustrating) teacher's fair, so I'll be quick.

Baby's doing well enough to allow her into a private room, which means that mama and/or I will have to be with her consistently until she's released (probably Tuesday, maybe slightly later). Which is terrific because mama's in recovery mode and shouldn't be doing so much traveling anyway. It also means that we may get to have a few more visitors. But, please, wipe your hands and blow your snotty noses before ya come in! (*wink*)

She's a feisty one, kinda like her mama, she even furrows her little and wide forehead like her beautiful mama.

Hopefully, I can get some pix of her and mama all cuddled up. They were running the tests on her when I came in this morning, so she was busy crying, which meant that she had the little eye-boogers on her (Joss, not Jen). Not the most photogenic, but I didn't have our cam w/ us anyhow. I'll have to steal Jen's. Jen's much more photogenic than me, but she's still cam shy. Yet how can you NOT look good cuddling next to that precious little pumpkin-head? She even makes me look good!

So much I want to say, so little time. But since pictures are worth a thousand words... 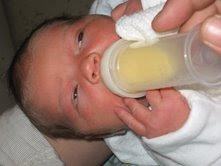 Notice what's missing.
Mama and I are a little concerned about some blockage in the nasal passages, but she's off the O2 tubes, among other things. 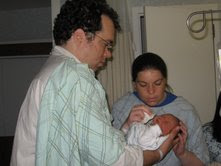 One of the rare, valuable shots featuring the recovering mama. She's cute. 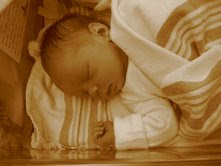 A really old picture of Jocelyn. 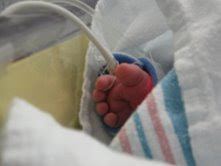 She's got large, spider-monkey feet.
The good news is, this is one of only two tubes left on her as of last night. 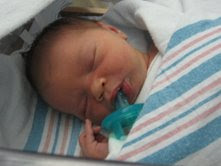 Yes, I know. We're planning an intervention.
I want to thank AJ and Therese for coming by yesterday and taking five million great pictures. (The first two pictures were courtesy Gramps Fronz and Jennie, both via the brilliant photographic capabilities of the Virgin Slver). Of course, I also want to thank Granny Fronz for exquisitely helping Jennie and the baby during the afternoon transitional period, and for Unky Chunky for coming by and bestowing his blessing on the other side of the pregnancy (Btw, Jocelyn is the first grandchild for both of our parents and obviously the first niece/nephew for our kin, so congrats to them too).

I also want to thank friends and family for their prayers, care and concern and stopping by here regularly for updates and images. I think our biggest areas of concern left are just in this transitional period (bringing her home w/o a boatload of expert staff at our every available whim for our slightest scare) and any concerns that we may/will most likely have in terms of insurance and payment.

Update V [The next one will be called Update Balboa] (July 22nd):

Not much to say. Or at least, not enough time to say it (promised Jennie I'd be back soon). But I will mention that we got news last night that we may be able to go home as early as tomorrow, Monday. She's eating well, but all of our hopes of putting her on some sort of schedule (and feeding straight from the source) seem to be flying out the window right now. O well, she's in a constant state of flux right now. We'll get it together soon and she'll pull herself up by her li'l booty straps before you know it. (You can tell I used to be a Republican?) 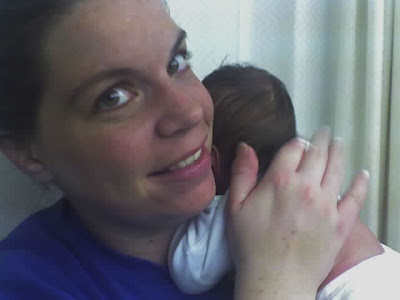 A picture I've been waiting to take for a while.
Don't know about you, but it makes me smile.

We're still not home, after hoping to be released earlier today (although good news may come along at any given moment, I doubt they'll release us within the day). But Joss is doing well. She kept mama up all night (which I understand is perfectly normal for newborns and teenagers alike). She's also actually gained weight since birth (2 oz's. This just after we were told that she lost all-told two ounces since birth. That's a gain of like 4 ounces in one or two days. Just like her fat daddy!) - usually the babies drop that weight in the first week since they're padded with extra protection for that necessary sleep time. But at this point, we're just playing it safe. She drinks almost two ounces (the magic number, apparently) on average every three hours.

I've got more errands to do (including a trip to UPS on the other edge of town, if I can). So, I'll talk more later.

The moment we've all bee waiting for. The end of Jabba the Hut and the final confrontation with Darth V....

I gotta go. My baby (and Jennie and myself) are coming home! 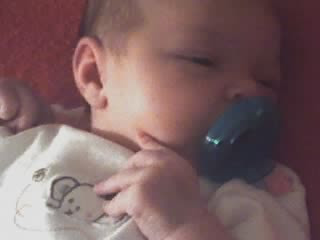 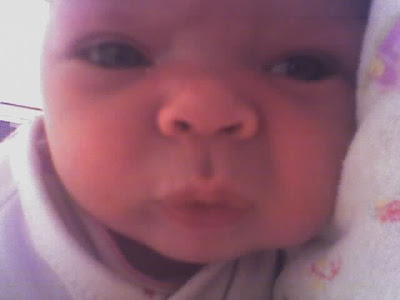 Look, colors!
I'm gonna clean up and feed my baby. Thanks for all your concerns, calls, texts, emails, prayers, etc.

We took little Joss to her first post-release doctor visit. She's not only fine, she's great. The doctor was thinking that she wasn't necessarily sick, but just threw up some milk (either mama's or the similac type stuff). Her little body (over?)reacted to defend itself and the hospital staff (overre?)acted in accordance to their policies to help the baby defend herself. But, honestly, I'm not knocking anybody. Better safe than sorry.

She's also actually gained weight already. And she's very peaceful. She can cry to stop a train, but generally speaking, she sleeps a lot, eats a lot, and poops occasionally.

BTW, I've been checking out the sitemeter to see who is interested in the news about our precious little bundle, only to find that a large contingency of international people who have visited (like, four of the ten) recently came for some insight (which I highly doubt they received) on biting beetles.

Is there something going on that I'm not aware of? (Zombie Roaches?)

OK, and for those who just can't get enough Joss (I'm talking to you, family), we've got Flickr and Picassa slideshows above. You can get and copy pictures, I believe, just by clicking on the images.

There are still technically two hours left to the day, so it's not a total wash. Yet. But the baby's due date has come and gone without incident. Which, in a sense, is fine because we've been spending the last few days putting our house in order. Which is a lot harder than I thought.

I'm not a Mr. Fix It. I can put together some pieces from Crate & Barrel or even Target (*shudder*), but putting up stuff from near scratch is harder than it looks.

I did put together a pizza from near scratch. Next time I'll still be using the Boboli Pizza Crust, but I'll stew and blend my own tomatoes - from my own garden! - and use more variety of cheese - from my own dairy farm!

I milk the cows with my own hands. One I name Monterrey Jack. The other, I call her Low Moisture Skim Mozzarella.

And then I'll deliver my baby. Tomorrow, I swear!
Written by jasdye at 9:53 PM 4 comments:

Because everybody keeps calling...

in good nature, of course, we've yet to have our little bundle o' joy.

But I did get a new laptop. Almost as cool. And I have to do less reorganizing to set this little baby up.


We just moved. And we're trying to fit everything into this much smaller apartment. We buying a lot of shelving units (enough so that the landlords should be paying us, but probably will use as an excuse to raise the rent on the next dwellers).

Oh, and did I mention our new place is right next to the El? Like literally next to the Chicago Transit Authority flippin' El? 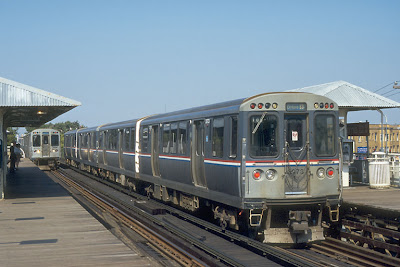 For non-Chi-townies, that's short for Elevated. A beautiful tapestry that works mightily through the structure of our grid-based town when it's working right. A perfected version was erected (and then destroyed) in Batman Begins. It was driven on some Billy Crystal/Gregory Hines buddy-cop drivel in the 80's. And Doc Ock tried to play the Speed game using one of our trains in Spider-Man II. We live in the Blues Brothers' apartment.

Like a freight train running through your head loud when you're not so used to it. And hearing it every two-to-twenty minutes in your bedroom or living room (or across from your potty) can be a bit unnerving.

By the way, her name is Jocelyn Carissa. And she'll be beautiful. I say this because I have faith that she'll look like her mommy. And not so much like her daddy.
Written by jasdye at 12:02 AM 3 comments: