The Poor Will Always Be Amongst ...

While doing a quick surf on the interwebz yesterday, I rediscovered why I so much hate Megan McArdle's pseudo-intelligent writing. This famous statement from Jesus was a title for one of her posts that - as usual with this cryptic statement - was used to justify an anti-poor agenda. In her case, she was arguing against the validity of at-risk hunger in the American poor. The logic was akin to, "See, they're all so fat! Ergo, they don't need MORE food money."
It's a pretty despicable show of aggression against the marginalized, but Christians all throughout this country use Jesus' words against his intentions all the time. On Facebook, some of my friends and I were discussing this term and what it means. I like some of their alternative perspectives - that it may be about the "poor in spirit", that it's also a sign that Jesus used the poor as an example to look to when he would no longer be around. We were discussing this term, of course, because we hear it being used as an excuse to do nothing for the poor - or nothing structurally, at least. That and, "All people are sinful. Therefore, whatever we do will simply fail. We will have to wait until Jesus comes."
The thread itself was on this great resource, Let the Churches Do It Is a Deceptive Myth (h/t to Slacktivist), that makes the - all-too-rare - case that churches cannot and will not pick up the slack for government if the "government would only get out of the way." It also clarifies that there is tremendous work still to be done with/for the poor NOW, and we don't have to wait for the gov't to get out of the way, but rather partner with them and fill in missing pieces.
But back to "The poor will always be amongst you..." 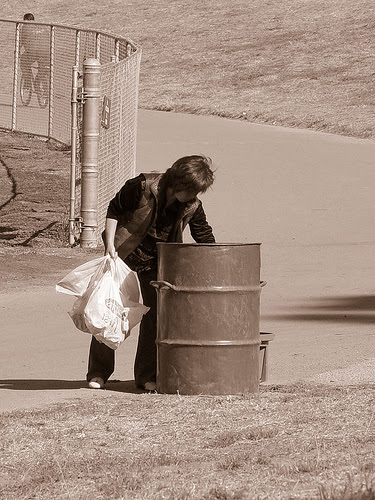 photo © 2006 Franco Folini | more info (via: Wylio)
Jesus was quoting the Old Testament. He does that a lot. Sometimes when you're reading your bible, it'll point that out for you. Sometimes you have to dig a bit deeper. Sometimes he makes commentary on and updates the ancient scriptures. Sometimes, he uses the ancient scriptures to put the present reality into horrible context. This is what he was doing in this case.
The original quote is found in the book of Deuteronomy. Not one of the nicest books in the world, let alone the Hebrew canon. But it is within this passage where we discover that all servants/slaves must be released from their debt service during the seventh year. In fact, all debts are to be canceled on the seventh year (pretty outstanding, even by today's standards). And it is here where we find this about treating the poor:

There need be no poor people among you, for in the land the LORD your God is giving you to possess as your inheritance, he will richly bless you, if only you fully obey the LORD your God and are careful to follow all these commands I am giving you today. For the LORD your God will bless you as he has promised, and you will lend to many nations but will borrow from none. You will rule over many nations but none will rule over you.
If anyone is poor among your fellow Israelites in any of the towns of the land the LORD your God is giving you, do not be hardhearted or tightfisted toward them. Rather, be openhanded and freely lend them whatever they need. Be careful not to harbor this wicked thought: “The seventh year, the year for canceling debts, is near,” so that you do not show ill will toward the needy among your fellow Israelites and give them nothing. They may then appeal to the LORD against you, and you will be found guilty of sin. Give generously to them and do so without a grudging heart; then because of this the LORD your God will bless you in all your work and in everything you put your hand to. There will always be poor people in the land. Therefore I command you to be openhanded toward your fellow Israelites who are poor and needy in your land. (Deuteronomy 15; NIV)

This isn't just about a bunch of nice individuals. This isn't just about being kind. This is to be a concerted effort by the collective people of Israel. In other words, "the government"...
The writer, Moses, mentions specifically that there will be plenty of resources to share, so there should not be any poor amongst them. However, he knows their hearts, and he knows reality enough to say that "There will always be poor people in the land."
"Therefore...."
Therefore...
Are there poor people among us? Why?
Written by jasdye at 11:32 AM