I've not written about this before because I did not want to add to the noise. But I believe that this nation is not being very reflective of its identity and problematic racial relations.

Let's get one thing straight. The US has - for hundreds of years, much longer than it's been an independent nation - profited extensively from racist (as well as classist, no doubt, but we'll focus on race in particular here) strategies, deployments, ways of life and economies. The classically Anglo supra-culture of the US has been towering and lording over the Others in order to be towers and lords, whether that Others may be defined in ethnic terms (as in non-Anglo Europeans) or strictly racial terms (the dark-skinned people of Asia, Africa and the Americas). Slavery and subjugation for advantages is not, of course, relegated to the White man. It's a part of human nature, and not just limited to the English or Western European culture.

Alas, but, Western European culture (and in no small part thanks to the writings of Machiavelli) is best at subjugation for profit and has had the ownership of much of the suffering in the world for these last several hundred years. Although one may look at the present carnage of, say, a Rwanda or a Liberia or an Afghanistan or a Darfur and exclaim that that situation is Black-on-Black violence, the troubling account for us White people is that we have 1) exasperated any ethnic or tribal battles by raping the country for valuable 'goods' and leaving the natives in more desperate need than before we arrived, 2) expanded any tribal warfare by lending, buying, selling war machines to totalitarian warmongers (Lords of War) and 3) created ethnic and tribal warfare that was never there in the first place in order to create an environment suitable for the colonists raping, pillaging and subjugating of the country.

So, this series that I hope to do is written partly out of frustration with how Whites are now backlashing against the so-called "Politically Correct climate" of our nation that won't - seemingly - allow them to speak about race in any meaningful or engaging way (because most of us have not walked a mile in a non-White's person's shoes) or to even ask the questions that tug at their hearts, that may be considered rude, arrogant or ignorant but indeed need to be brought to the light in order that this country can begin to heal itself.

There won't be enough time to deal with anything more than an iceberg, but here are some stories that I'd love to at least touch on:

A professor who questions the academic and racial merits of athletic scholarships at top NCAA schools, such as his own Rutgers (and remember the Imus flap? Are they related? Only tenuously, methinks.) He is later called a racist by his own athletic director.

The painfully slow increase in minority (and female) headship in pro sports, an arena dominated by multi-millionaire Blacks and Latinos, yet almost exclusively run by multi-billionaire white males, with fewer people-of-color the higher you go. And what is more damaging (hey, I'm not crying over millionaires here) is how this affects the mindset of lower-class African American males.

Against our wildest dreams, the Chi-town Northsiders (who are rumored to pick up A-Rod next year for something like a minority stake in the business {Don't do it, Alex. It's a trap. Watch what happens to the poor guys working the Tribune Tower in about four years.}) clinched the National League Central.

Now, the ol' NL C just ain't she used to be, but post-season is post-season, sister. 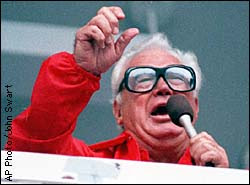 It may be a while before I can settle down enough to actually get to blogging again on any sort of regular basis, but I thought these somewhat interrelated pieces interesting.

Firstly, the Saint of Calcutta and the "utter darkness" that she felt most of her life. I've always thought it strange, personally, that people would put so much emphasis on this 'feeling' of God, as in during those moments that they do not sense God's presence it's almost as if he's abandoned them. I've rarely, if ever felt God's presence in my life - certainly not in some sort of otherworldly or light-ish way. If I have, it's been through the touch of another, through the warmth of another, through the otherworldly and/or euphoric state that music can put me into (esp. Black Gospel music), or a particular state and time of peace. But I wrestled more with, I suppose, intellectual doubts than emotional doubts.

Not that I'm an intellectual or stoic; it's just that I've never relied on that stage that much, nor found it abundantly in the narratives of the Bible (well, with notable exceptions such as Jesus on the Hill of the Skull and David in a few of his psalms). Part of the truth may be that I was raised in a fundamentalist church, which being more Enlightenment than we would like to admit, was highly suspect of emotional displays of spirituality. (Truth be told, although my range has immensely broadened lately of what would be considered right and wrong within the Body of the Church, I'm still a bit off-put by what I would consider extreme theatrics - not the wave your hands in the air type, but perhaps the falling out/slap you with the Holy Ghost type. It's something that I think that I need to learn to fully respect and whole-heartedly love those who do honestly love the Lord and seek to follow him in their understanding).

Nevertheless, I do feel for the likes of Mother Theresa, people who have abandoned the Babylons of their fathers to traverse the unfriendly globe and land in the Canaan home that is not their own for God, only not to hear back from God for many, many years. Those who have acted out a Kierkegaardian and Sampsonian leap of faith only to find themselves in a cesspool of humanity at its most inhumane.

I think that Scot McKnight has some good things to say about this "darkness" (not fully reassuring, which is good, as how could it answer all of our questions?) in his series on Theresa, culminating with this article on his own hypothesis. It's worth the short read (and written with more authority and clarity than my little trifle here).

Secondly, some snippets from the educational philosopher Paulo Freire, whose manifesto A Pedagogy of the Oppressed I will quote from here (chptr. 1) was written, fittingly, in the 60's. This reminds me so much of what King was saying. Only this time, it's in Portugese:

[T]he oppressed must not in seeking to regain their humanity..., become in turn oppressors of the oppressors, but rather restorers of the humanity of both.

But almost always, during the initial stage of the struggle, the oppressed, instead of striving for liberation, tend themselves to become oppressors, or “sub-oppressors.” The very structure of their thought has been conditioned by the contradictions of the concrete, existential situation by which they were shaped. Their ideal is to be men; but for them, to be men is to be oppressors. This is their model of humanity.

Aarrrghhh! Why can't it be so much easier?!? Why can't we just say a magic word and release the prisoners? Why can't I be released and release others with me through just temporary willpower?

Well, if I desire heaven's footprints on earth, better get to workin'.
Written by jasdye at 10:00 PM 2 comments:

First off, I am so proud of myself. I finally finished a good big book. That's right: Richard Scarry's Big Book of Bestest Storybook Ever. 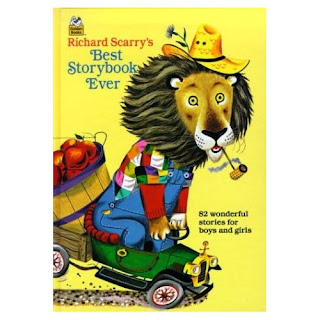 Started it in second grade; was never able to put it down or get past those funny images. And, did I mention, it is really big.

Taylor Branch wrote at least one supreme masterpiece of non-fiction (what other type of fiction is there?) in Pillar of Fire: America in the King Years, 1963-65.* I think that The Boston Globe was very adeptly accurate in calling it "Jet-propelled history." 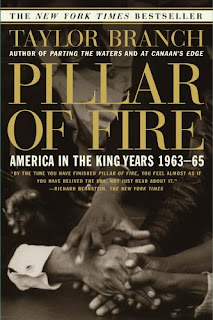 The second-of-three on the America in the King Years trilogy (the first being the Pulitzer Prize winning Parting of the Waters and the last being the more recent At Canaan's Edge, neither of which I've read, yet), the series is not so much a biography on Martin Luther King, Jr. as a tour-de-force lens on reading the U.S. through the focal point of King. The historic March on Washington gets but one paragraph, and much of that focuses on Malcolm X and other leaders. Only a few passing notes are made on the "I Have a Dream" speech. In this 600 page tome, Branch has less-famous fish to fry.

Two of the most captivating and central figures in the book are Vice- and then President Lyndon B. Johnson and the Student Nonviolent Coordinating Committee's torn and born leader Bob Moses. 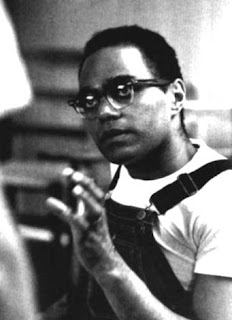 Moses
Other intriguing giants in this land include King's right-hand man Ralph Abernathy, the entrenched and fearful state of Mississippi, the austerely beautiful and strong Fannie Lou Hamer, the arch-conservative self-bureaucrat J. Edgar Hoover, Barry Goldwater, the presidential candidate who turned the Republican Party against the Legacy of Lincoln, J.F. and R.F. Kennedy, the NAACP and the NCC, Elijah Muhammad and his tight and violent grip on the Nation of Islam and its defactors, the New York Times and the press, the extreme activists within King's SCLC Diane Bevel Nash and her husband James Bevel, the ingenious and tragic Mississippi Freedom Democracy Party, the aforementioned Malcolm X, the four girls in that church in Birmingham, and haunted and neglected leader Lawrence Guyot.

I want to do a series of essays on this book. It's just that profound. I can't get it out of my head. 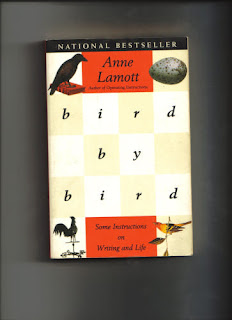 book right now. I want to say a lot more about it, but it's about half the way to the point where I can even show parts of it. And maybe about 1/6th through to where I feel it can be published as a work, if I'm good and continue at it. Lamott was always one of those dry and just slightly eccentric left-of-center witty-izers who I admired from a distance. This book on writing is like taking an MFA class with her. Except that by only paying $11, I don't feel the guilt of not having spent my money wisely unless I write a billion pages a day. And really, who has time to write when you're reading all day?

Sports Illustrated. Because somehow, I let myself get talked into two pick-em leagues and one fantasy football league. And we. don't. actually. watch. t.v.

Contemporary Issues in Curriculum: Fourth Edition, ed. by Ornstein, Pajak, and Ornstein. There's no hiding it. It's probably the most boring $80 I've spent recently. There's 20 hours I'll probably never get back!