Sublime performance of the Theme from Doogie Howser

Gotta have me some Doogie!
Written by jasdye at 7:00 AM No comments:

Weekly Links We Like to Link to: OK, you can call this a comeback.

And yes, these articles are at least a month old! Got a lot of catching up to, kids. 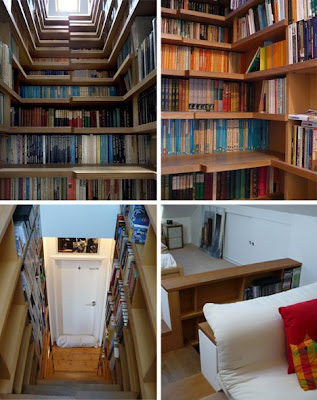 I want me some bookshelves like these! And then maybe I can get me some readin'!

Tips on why Obama is not a socialist. "Obama properly belongs in a specific anti-socialist movement on the left, Social Democracy, which accepts a capitalist economy but demands a state strong enough to moderate its failures and excesses."

"Why newspapers can't be saved but the news can."

Christianity had taken root in some non-European locales that we don't tend to associate with Christianity at all. Philip Jenkins (not the Left Behind guy, but an author who studies the movement of Christianity in non-Western world - lastly looking at the astronomic rise of conservative churches in the Global South) is interviewed about why these ancient churches died out. The answer may surprise you (well, maybe not. But it did take me under):

PJ: Churches die by force. They are killed.

CT: But what about the old saying, "The blood of the martyrs is the seed of the church"?

PJ: That was said by Tertullian, who came from the church in North Africa, where the church vanished. If you were to look at the healthiest part of Christianity right around the year 400 or 500, you might well look at North Africa... It was the land of Augustine. Then the Arabs, the Muslims, arrive. They conquer Carthage in a.d. 698, and 100 years later—I don't say there were no Christians there, but there certainly was only a tiny, tiny number. That church dies.

Written by jasdye at 8:00 AM No comments:

Call it the Kingdom of Heaven, Incarnate Living, Missional. But please don't call it Shirley.

Jesus' new way of taking over (the beginning of his kingdom on Earth):

It wasn't a matter... of Christians simply taking over and giving orders in a kind of theocracy where the church could simply tell everyone what to do. That has sometimes been tried, of course, and it's always led to disaster. But neither is it a matter of the church backing off letting the world go on its sweet way, and worshiping Jesus in a private sphere.

Somehow, there is a third option... We can glimpse it in the book of Acts: the method of the kingdom will match the message of the kingdom. The kingdom will come as the church, energized by the Spirit, goes out into the world vulnerable, suffering, praising, praying, misunderstood, misjudged, vindicated, celebrating: always -- as Paul said it in one of his letters -- bearing in the body the dying of Jesus so that the life of Jesus may also be displayed.

What do you think?

Written by jasdye at 6:13 PM No comments: