Inevitably, whenever you get a mixed group talking about ethnicity and racial justice, and history, the topic of reparations of one form or another is brought up. The topic could be slavery in the New World, cultural and population genocide of the indigenous in the US, cultural and property genocide in Australia - but the topic in one form or another hits this supposed sleeping giant.

And the defense, the very natural defense for us white folks - and I sure as heck have thought this and used this line since I was twelve till about the time I started shifting maybe eight or so years ago:

But I didn't do it. Maybe, maybe some of my parents were involved. But, see some of my parents were Puerto Ricans (or fill in your blank, non-white descriptor), and most of them were poor or weren't even IN this country at the time or they were Northerners and Abolitionists fighting to free the slaves, but even if they were slave owners or slave drivers, that wasn't me...

Those who use this defense are not necessarily bad or racist or even ignorant. Rather than going after the individual making such statements, it is beneficial to remember that we all suffer from bias and from a system that demands and takes and orders and cushions and protects itself against all others. This line of thinking, it is important to remember, is another tool in the pervasiveness of Dominant Culture Survival - another line where the dominant culture (particularly Western/Euro-American) tries to protect itself from considering our own culpability - and we, growing up white in America, almost naturally adopt that defense as if it were our own.

Let us start with the recognition that history has a current role in racial injustice. Globally, and particularly in the Americas and Australia, the indigenous have been deliberately robbed of their wealth, land, and (for most) cultural signifiers such as language and history. The African diaspora that is currently in the Americas (including not just the US, but Haiti and Brazil among others), have also been robbed of their ancestral cultures as a collective cloth (though much of it survives in bits and pieces and still more is being found and rediscovered by the descendents), their language, their work, their families, their blood, the value of their work. The wealthy elites, bosses, and agents of White America saw generations and perhaps centuries of tremendous profit to be made for themselves and their progeny - and that profit could most easily be made if those working for them did so as perpetual, soulless children, bereft of will and completely dependent on the whims and moods of their "masters." They tried their damnedest to steal the dignity and humanity of the indigenous and tribal.

Fortunately, that experiment failed. Economically, the northerners figured that a "free" labor source (though still ridiculously low priced) without fear of so much upheaval would be cheaper than maintaining and propping up a system of continuous fear and paranoia (it's a delicate economic line that the very wealthy are still trying to distinguish between in struggling between FreedomWorks, CitizensUnited and various Koch-backed agencies on the one hand and the Buffetts, Gateses, and other millionaires who aren't as willing to see hungry masses crash the gates just yet on the other).

Unfortunately, that experiment lives on in too many aspects to count in such a blog post. But maybe a primer will suffice for now:


These devastating realities did not just happen. They certainly did not happen because Black and Latino Americans (or fill in your marginalized people group) are lazy or inferior (though there are supposed "scholars" who make it their work to argue just that, and entire populations who eat that sh*t up for breakfast). In fact, to speak broadly, people of color in these here United States have had to work much harder than White Americans just to get by - just to literally survive. Much the same can be said of the indigenous and the African diaspora globally.

The awful truth is that Euro-colonialism has stolen from non-Euros and continues the trend of stealing from them, from their wages, from the fruit of their work, by refusing care. What remains is not much - and for many, it's much less than adequate. Do we who have more access to wealth and privilege due to those robberies owe them any debt? I believe we do - at the very least to erase the debt, to start the clocks over again, to release the prisoners, to declare the year of jubilee.

We who have descended from Europeans like to say (and as a White - though also bi-racial - American, I have also myself since at least the age of fourteen until the last five or so - almost twenty years) that WE should not be held responsible for the sins of our ancestors. Yes, sure.

But neither should the indigenous nor other people of color be held responsible for the sins of our fathers.

Especially while we still benefit from those sins...

----------------------------
* Because I'm speaking of a global phenomenon, I do not want to show trends rather than figures. The links provided, however, give just a glimpse as they are focused on the United States and particularly the relationship between Black and White Americans in dealing with justice. It doesn't give a comprehensive picture, of course - and if you would like to offer some extra links, maybe we can have a link dump in the next blog to demonstrate the global inequity. The figures that are presented in these links, however, are staggering and mind-blowing, but I also want to point out larger trends - not just in the US, but in Canada, throughout the various Latin American countries and regions, in Europe and white-run sections of the rest of the world (South Africa and Australia come to mind), as well as throughout Africa and Asia.

Written by jasdye at 6:00 AM No comments:

Jesus, we Christians must remember, was not content to be a removed deity, off in the sky judging humanity and moving efforts from the heavens. The story of Gospels is the story of an incarnational God - a God who not only walked among men and women, but was one of them. A lord who did not lord, a religious leader who welcomed all into the work of ministry. The story of the Gospels is, therefore, a testimony against centering and lording forces such as imperialism, statism, and capitalism, an alternative to presidents and corporations.

In that sense, however, the greatest remaining legacy to the witness of the incarnation in the US may not reside in the four walls of the institutional church. It does not belong to the power-hungry Religious Right in its various incarnations (let alone the Billy Graham Evangelistic Association). It does not belong to the Republicans, nor to the Democrats (shockers, I know!). But it also doesn't honestly belong to me or my friends in the Christian Left or much of progressive Christianity (at least as far as bloggers) - though I like to think we're preparing groundwork and pointing the way.

No, those on the ground, those in the trenches, those doing the dirty work - those are the ones demonstrating the incarnation by being and doing interconnectedly. Such actors are in every community of course, but as far as any large body where I see the work of community and salvation being worked out without authoritarianism, without massive centralization, that distinction goes to the Occupy Movement. Still. While the rest of us have just about forgot about them save a few slogans, they've been involved and part of communities in need; they've been incarnational this whole time. 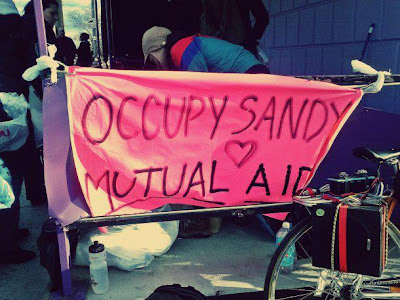 So how did an offshoot of Occupy Wall Street, best known as a leaderless movement that brought international attention to issues of economic injustice through the occupation of Zucotti Park in the financial district last year, become a leader in local hurricane relief efforts?  Ethan Murphy, who was helping organize the food at St. Jacobis and had been cooking for the occupy movement over the past year, explained there wasn’t any kind of official decision or declaration that occupiers would now try to help with the hurricane aftermath.  “This is what we do already, “ he explained: Build community, help neighbors, and create a world without the help of finance.  Horst said, “We know capitalism is broken, so we have already been focused on organizing to take care of our own [community] needs.” He sees Occupy Sandy as political ideas executed on a practical level. (Emphasis mine)

How to make a difference that will last? Be incarnational.