Some more meditations on Good Friday and Easter:

EASTER is not the celebration of a past event. The alleluia is not for what was; Easter proclaims a beginning which has already decided the remotest future. The Resurrection means that the beginning of glory has already started.

Jesus's death was not only physical, as noted earlier, but also spiritual. I'm not a theologian, I don't have a clue as to whether or not he went to hell for a day. Or how else Jesus would've preached to the souls in prison, as testified in one of the latter epistles (I think Jude's). But I was able to glean a bit into the suffering of Jesus, why he would agonize so much over the cup he was to drink (more on that later), asking that that should pass from him. 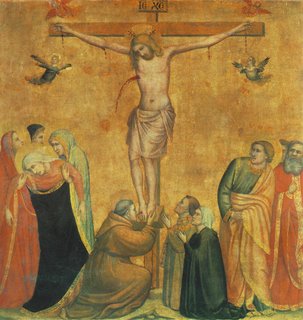 A few years ago, my associate pastor decided he wanted to dramatize the Life and Death of Jesus as a one-act wordless play. He and I worked on much of the dramatization together. One thing that struck us, that we tried to dramatize, as silently as possible (with the sole exception being one of the last words of Christ) was his connection and then rejection by God the Father, and how utterly cold and alone he must have felt on that "Dark Night of the Soul."

Jesus was a human being, as we mentioned earlier, but he was intimately connected with his Holy Father, the first person of the Trinity, whom he did everything according to. I'm not sure that Jesus would ever sing a song about "Everyday is sweeter than the day before" about his relationship with the Father, but it's evident, from his miracles, his teachings, his lifestyle, his prayers, that they were intimately connected, that God the Father was his lifeblood. Jesus' act of being led to the slaughter was an act of obedience to the Father, in fact. And, there could be no breaking of the connection between the obedience and love of Jesus. They were intertwined at the hip, in soul and embodiment.

Yet, for all of the relationship, for all of the kinship, for all of the blood between them, why does Jesus feel abandoned in his primo time of need? One of Jesus's famous last words is a desperate cry, "Father, Father, why have you forsaken me?" (Which was the aforementioned spoken part of our dramatization.) As much as we like to point out the obvious, that Jesus died a horrible physical and bloody (though probably not as bloody as suggested by Gibson's The Passion of the Christ) death by means of the crucifixion, a cruel, long-lasting mixture of asphyxiation and (internal and external) blood-letting, what happened spiritually was of equal importance. (As per the worth of the physical death of Jesus, "Without the shedding of blood, there is no forgiveness of sins.")

If, again, death is a separation from life, than Jesus' death was both physical (organs stopped working, as attested to by the Roman soldiers, experts on excruciating and painful dying and death) and spiritual. For God, the epitome of life itself, had separated himself from Jesus. What Jesus suffered was the cup of God's wrath, his anger and punishment against all humanity in all of our sinfulness was upon Jesus (the Suffering Servant of Isaiah) and it was God's good will to have him suffer - on our behalf.
Written by jasdye at 6:11 PM