Took a break from my extensive I'm-trying-o-grade-and-it's-scaring-me-when-it's-not-boring-me day to catch the mail and bring up my clothes from the basement laundry room. I never made it to the dryer.

Asthmatic Kitty records delivered Half-Handed Cloud's Thy Is a Word & Feet Need Lamps and Sufjan Steven's Greetings from Michigan: The Great Lake State in the box. It's more of the singer/songwriter ork-pop/folk-rock I've been rapping my mind around for the last half year. Delicious stuff. Michigan is the first part of the ongoing States records series that Stevens swears he'll complete (that's right, you can grab all 50 of them!). Illinoise (my favorite record of last year) is the second. That's two records in about three years, give or take. With one intermission (Seven Swans, which AK didn't have.) He may complete the series in his lifetime, but some of the albums will have to be as short as some of his songs. Of course, with the return of singles as the dominant recording form, he just may. 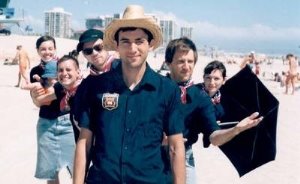 Sufjan and Co. trying, unsuccessfully, to conquer one of the lakes of Michigan. 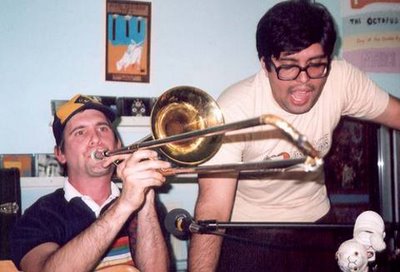 I'm sure band geeks could come up with a better joke than mine about this Half-Handed Cloud playing the tromboney-thingy. (Ok, again, not a joke. Again, I'm not a musician. Sue me.)
I actually want to write a review of these records, if for nobody else than for this geek right here. So, maybe I should listen more before I say much. But I'll say this right now: I'm glad the roommates aren't here right now. As Linford from Over the Rhine says, you need to play quiet music loudly. Not that this is necessarily quiet music (very busy). But makes me happy.
Written by jasdye at 5:08 PM