Derek Lee's out for probably two to three months. It's a bit like losing your major striker, or goalie, or quarterback, for anybody not familiar with the home run / RBI / On-base king of the post-steroid Major League Baseball era. Yikes! Sorry Cub fans. I'm sorry for the whole city. I'd LOVE to see a Red Line World Series. Man! 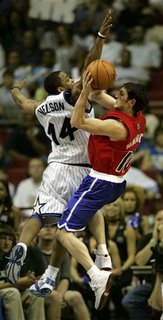 Yes! it's o-fish'l: The Scrubbin' Bulls are playing the Oversized, Over-Ego'd Heat tomorrow night for the first round. We should steal at least one game. But seriously, the Heat'll explode. Just not in Chicago. 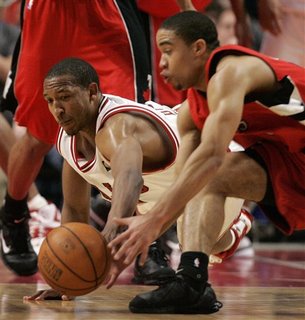 And finally, less than two weeks to go. I LOVE her! (Sorry, ladies, I'm taken. Cutie, huh? How'd I luck into her? Like the president of the chess and computer club being with the homecoming queen.)

A report in the Chicago Tribune states that, "Of 100 Chicago Public School Freshmen, Six Will Get a College Degree" by the time they hit twenty-five years. Among African-American and Latinos the average drops in half. Three percent. Of probably more than half than the entire population of public school students in Chicago. One of my students was whiney again today and said that I must not care, just as long as I get my check. I assured him that if I didn't care, there's no way I'd be teaching there, as classroom management is my weakest point, but what I spend probably the most time in. Apparently, though, that's not the case for everyone who teaches here. Not that that's the only problem, but still... (Lowered expectations.)

Umm... and looking that story up online (I'm reading it from the print) gave me this little tidbit. If you're gonna blog about your work, keep your racist comments out. In fact, keep them out of our schools.

To quote extensively from the Tribune online article:

Typing rambling screeds in an anonymous blog he called "Fast Times at Regnef High," a Fenger High School teacher unleashed his frustration over the chaos he saw around him.

He labeled his students "criminals," saying they stole from teachers, dealt drugs in the hallways, had sex in the stairwells, flaunted their pregnant bellies and tossed books out windows. He dismissed their parents as unemployed "project" dwellers who subsist on food stamps, refuse to support their "baby mommas" and bad-mouth teachers because their no-show teens are flunking....

This week, after returning from spring break, the students read how they were depicted and flamed the blog with profane threats and righteous indignation toward the teacher.

By Thursday, the reaction grew so vitriolic that the blogger took down his site from Blogger.com. Also that day, a Fenger High teacher e-mailed his principal that he wasn't coming to school because he "feared for his safety." The teacher was the same one widely believed to have authored the blog because he told two colleagues that it was his, Fenger Principal William Johnson said.

Johnson said he doesn't know whether the teacher has resigned. The teacher hasn't returned Johnson's phone calls or replied to an e-mail asking to meet with him. The teacher did not acknowledge to the principal that it was his blog, but Johnson said he has no doubt, based on the writing style and his disappearance after the students named him in their postings....

"He's lost his credibility," Johnson said. "He lost the faith and trust of his students."

The animosity stirred up by the blog fueled even more chaos in this beleaguered all-black school in Roseland on the city's Far South Side, among Chicago's worst performing. But the principal said the episode has galvanized the school in a way he had not thought possible—and is encouraging staff and students to talk openly about the problems and how to fix them....

--editor's note:
However, there was a bright spot in this mess. Sometimes out of the mouths of babes... or, in this case, ignorant men indignant that they've stumbled into a world that clashes and crashes with their idealism (not that idealism is a bad thing. It just needs to be tempered with understanding, empathy, a perspective that looks for the positive even within the most dire, and a historical perspective - after all, people just don't appear out of the blue, born ready to be criminals because of their genetic disposition. Of course, we are all fallen short of the glory of God, but that's not the same thing.)

"There is a silver lining," he said. "It brought Fenger together." Johnson said he plans to hold student forums next week to discuss the blog, both the antagonism it revealed and the challenges that need to be fixed.

"He was painting a picture of desperation, and I had a problem with the generalizations he made," Johnson said. "But some of it was true, and that was the tragedy. If he had gone about it in a different way, it could have been a great forum."...

Latasha Ivy, 17, senior class vice president, found out about the blog last week and read it with her mom. They were both angry about the crude stereotypes and didn't understand why the teacher stayed if he was so miserable, she said.

"These are things that happen at Fenger—fights, drug-dealing, gangs—it happens here like it does at other high schools. I already feel bad when I tell people I go to Fenger, because they go, 'Ooooh, that's a bad school.' But there are still people here trying to do something with their lives," said Ivy, who has been accepted at the University of Illinois this fall and plans to study biology.

Gerald Rogers, 17, said the blog was a "big topic everywhere." He was struck by how many students read the site and posted comments. But he still found the teacher's observations "racist and derogatory."

"If he felt that way, why didn't he come up with any solutions to the problems?" said Rogers, the junior class president.

-- Probable answer: He was too busy playing the put-upon martyr.

The teacher compared his suffering to Jesus, Mahatma Gandhi and Martin Luther King Jr., and he suggested that many others who worked and studied in the building shared his opinions.

"Do you not realize that many people go home and CRY to their loved ones about what they experience here? Do you have any idea the psychological and emotional trauma that is inflicted on those who suffer because of the daily injustices and wrongdoings here? To fear for your own safety? To know that you will likely be unemployed, hated, spit on, punched, and have property destroyed? This is not a one person blog. This is a building speaking for the suffering it sees every day."

-- Yeah, we do hurt. I'm speaking as a teacher who has never felt so emotionally drained, who has hung his head in shame and sadness, who has dealt with major feelings of inadequecy throughout this last year. But I'm not the hero. I'm not Superman or Jesus. I am not dying so that these kids may have life (although in some ways I should and in some smaller ways maybe I am), taking all their sins upon myself. Rather, I think the example should be a Daniel, someone who weeps for his generations sins, and recognizes his complacency and part in them. These young adults don't need someone else to be superior over them, they need leaders to lead them by example and deed. Yes, in that sense we should be Jesuses. This teacher, obviously, isn't.

One Fenger teacher publicly challenged this view, both in a signed posting and in numerous conversations with her English classes.

"Although many of our students adopt tough facades and insist they are grown, they are still children: sensitive children who still crave guidance, encouraging words and positive reinforcement," wrote teacher Gina Miski. "Was the author present when students, having read the blog, dejectedly hung their heads with pained, angry tears stinging their eyes?"

-- God have mercy on us all. On me. On this man. On the staff and students and community of schools like Fenger and my beloved Clemente.
Written by jasdye at 10:20 PM