Joyous Easter to All

Call: He has risen!

Response: He has risen indeed!

My pastor this morning was telling the story of how the Roman Empire would put Christians to death in the 2nd Century AD - the blood and circus trick of feeding them to the lions. However, unlike the eponymous hero in The Gladiator, these brave men and women readied themselves for a different reality in the throes and claws of death. For the Christians on the inside of the ring - as the lions were released - would call out to the Christians on the outside of the ring, watching and waiting for their turn, "He has risen!"

Those just outside of the ring would respond, "He is risen indeed." This was a way to call and bring back hope for themselves, for their hope, their only hope, their life-long hope was in the resurrection of the Christ. And if the Christ had resurrected, surely they who followed him under his promise of their rising, would also be resurrected.

N. T. Wright's Easter message this year focuses in on Mary Magdelene's central message of the ressurection, and once again, he opens my eyes to see some thing(s) that I've overlooked. (For one, that the climax of the resurrection in the Gospel of John is Jesus telling Mary to go to his "brothers and tell them, 'I am ascending to my Father and your Father, to my God and your God," not this near comical piece of Mary getting confused and riled up only to cling to Jesus as he's trying to float upwards to God.) 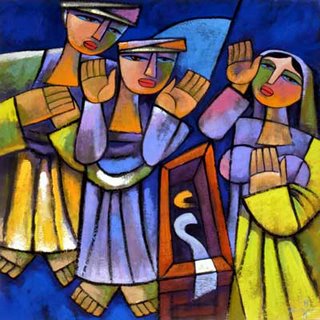 Empty-Tomb by He Qi, China

I do think that it's significant that the first to witness, to see and to hear and to proclaim to others this news of the empty tomb were women.