Best of the Week

"Apparently, in the medical community, 'negative' is a good thing. While, to the rest of us, negative is a bad thing. This is very confusing."

- Michael on "The Office," concerning his nearly falling out when he gets the news that one of his coworkers' skin cancer tests came back negative. 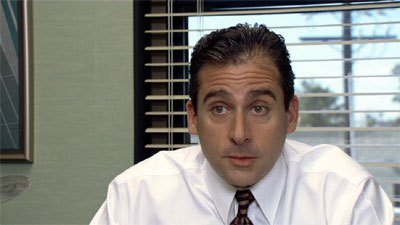 Without a doubt, Inside Man. A few months ago, my roommates did a very odd thing. They watched a (non-sports related/non-romantic comedy) movie with me, fully enraptured in it. The 25th Hour was a good Spike Lee movie with a social conscience, although hardly a person of color in the entire film. And, unlike Bamboozled, Inside Man is not a African-American movie. It does present a multicultural NYC with hardly a big deal thrown in. (The scene with the Sikh was appropriate, but somehow it didn't seem to mesh with the rest of the movie. It seemed a bit forced, I guess.) There's a lot of humor in this caper. It has a lot of funny scenes (the mostly white-people filled theater I saw this in last Saturday afternoon was not only half-filled - rare for a matinee adult movie - but also busting at the seems throughout. This is especially true for the loud gentleman sitting behind me. Oh, well, I've seen worse.) and is more suspenseful than your typical star-loaded caper (Take Ocean's 12 - please - or even 11). And yes, it has a social conscience. It wouldn't be a Spike Lee movie without one.

Ok, so these are easy. It's rare for me to go see a movie or to a concert. Rarer still to do both in one day. But going to Wheaton to catch the very energetic, charismatic and technically superb Nickel Creek, opened by a probably more energetic and charismatic Ditty Bops - who stylistically were all over the place. Although the DB's were also absurdly musically gifted and practiced (apparently, the core's been together for ten years) the singers' tinny voices are a bit grating. And, oh, yes, there was a pirate song. "ARRRRRRRRRRRRRRRRRR!"

Have to thank Micah for this one, but there's just something insanely funny about nerds playing dress-up live action role playing games (apparently, it's larp to those in the know).

It also reminded me of an episode of "Reno 911" I saw on dvd a few weeks ago, that Micah was also happy enough to find for me. You might recognize the "Boots of Escaping" guy as Patton Oswalt from the King of Queens and that Marilyn Manson [edit: Monroe] / kilt parody commercial. And then again, you may not.