God speaks out of the whirlwind? 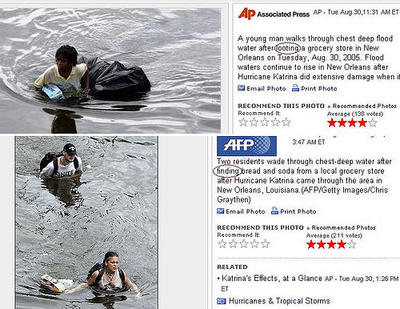 I'm sure many of us have seen this travesty of news reporting. (If you haven't, pay attention to the circled words and note the difference of the subjects in the accounts.) I do realize that these accounts come from two different news sources. And I don't believe that they are indicative of overt racism. But then again, racism has historically played a large part in the Human Storm - the struggle in the aftermath of the physical storm.

I really don't know what else is left to say of this. Every blog in the English and French-speaking North America by now has something on this. And many are much more educated on it and devastated by it than I am.

Christine has an ex- trying to leave that region. My brother's honeymoon is cut short because his ship is sailing to join efforts to somehow make relief possible.

And the fact of the matter is, I somehow feel less attached and less able to help than with the tsunamis, which didn't directly affect my country. But I saw images there that I could not forget. Much the same as with 9/11 and I was watching on live tv when the second tower was being struck and much later when people were jumping out of windows. Catastrophe. Do I feel less burdened for my own people?

I mean no offense by this. But there are wars being raged in all parts of the world on a daily basis. Innocent children and civilians are being bombed the hell-over, people are evacuated from their homes because of feuds that rage longer than anyone can dare to speak of, blood-money is the chief currency of the local economies and has the ears of the law-makers and -enforcers (including in this my own Humboldt Park, though to a lesser extent) the world over. And all we care about are a substantially smaller field of Americans?

I know that people will be pissed with me over this, but: how many Iraqis have died in Iraq since the war started v. the amount of US soldiers? I don't want to take life for granted. And I think it's my patriotic duty, as a freedom-loving, hot dog-eating, Coca Cola-drinking, and certainly church-going American to draw our attention to life at all stages, regardless of color, creed, sex, money or even nationality.

The Lousianans who stayed behind largely did because they couldn't afford not to. They were too poor to leave, so they decided to ride it out. The looting began because people were on the precipice of civilization. And while some understood the necessity before them and struggled to provide for their families, neighbors and selves (as in the pictures above, of both blacks and whites doing the same thing, with different judgements made of their actions), others descended on insipid lawlessness like the children from Lord of the Flies. Why? Because that's human nature. I'm not sure that the thin green line between civility and safety and chaos and flood waters is of much comfort and reassurance in the light of such utter sadness and darkness.
Written by jasdye at 8:46 PM