Would They Deny the Body to the Body?


Pope Francis went into a juvenile detention center and washed some feet. Scandal of scandals!

No, seriously. The idea that the Holy Father would get down on his feet in front of poor law-breakers - some of whom are female - is scandalous, according to traditionalists within the hierarchical Catholic Church.


[On] Thursday at the Casal del Marmo juvenile detention facility in Rome... the 76-year-old Francis got down on his knees to wash and kiss the feet of 12 inmates, two of them women. The rite re-enacts Jesus' washing of the feet of his 12 apostles during the Last Supper before his crucifixion, a sign of his love and service to them.

The church's liturgical law holds that only men can participate in the rite, given that Jesus' apostles were all male. Priests and bishops have routinely petitioned for exemptions to include women, but the law is clear...

"People naturally imitate their leader. That's the whole point behind Jesus washing the disciples' feet. He was explicitly and intentionally setting an example for them," he said. "Pope Francis knows that he is setting an example."

The inclusion of women in the rite is problematic for some because it could be seen as an opening of sorts to women's ordination. The Catholic Church restricts the priesthood to men, arguing that Jesus and his 12 apostles were male.

There is much to like and perhaps to not like about the new pope. There are many controversial decisions (for whatever reasons, his not wearing of fine vestments is one of them) that he has made in his short papacy, but I want to focus on the scandal of the idea that women can receive a sacrament meant only for men.

Because the origin of the limitation here is built on a notion that I've heard in hierarchical Evangelical churches as well (aka, Complementarians): the idea that Christ's apostles were men and only men. Therefore a sacred task (washing the feet in Catholic church tradition, preaching in Complementarian churches) is open only to males. No matter how socio-economically open, no matter how racially or ethnically diverse, or even how ecumenical, still one half of the world is denied something so holy.

But wouldn't this then limit also the taking of the Host, since the same foot-washing apparently limited to only Jesus' male disciples was also the same event wherein they shared the Last Supper. Shouldn't only then males drink the blood and eat the body?

Jesus' encounters with the excluded (whether they be blind, bleeding, Roman centurions, Syro-Phoenician mothers, tax collectors, the physically handicapped, the psychologically tortured (demon-possessed), or the dreaded Samaritans - even Samaritan females!) shows a different Christian witness - the witness of intentional inclusion.

But I guess it should be noted that those same women were at first also dismissed by the male hierarchy of the original church, as it were. It seems that much of the Christian Church is stuck in a certain time - the time after Jesus had defeated death with its finalities and its exclusions, but before the rest of the world discovers what impact this would have on them - how his resurrection and Kingdom Life would negate the distinctions the world places between Male and Female, Greek and Jew, Freeborn and Slave.

For in the body of the Risen Christ is the body of all. And the Christian Church should be a witness to that, should be leaders setting a new example, should be apostles of a New Way of Being. 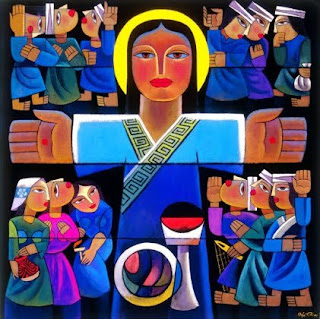