It was kinda odd to read about this trendy little cocktail spot in (one of) my neighborhood(s) named after Billy Sunday, the famous prohibitionist/fire-and-brimstone evangelist/baseball player from the turn of the 20th Century.

Of course, like the neighborhood itself – Logan  Square – the name has a way-too-big hipster/ironic quotient. A place that sells liquor going by a character name-checked in Frank Sinatra's "My Kinda Town" as the guy who couldn't shut down the nightlife during Prohibition.

Prohibition for Sunday, the converted ex-alcoholic-turned-evangelist, may have been his only social work - and it wasn't necessarily a bad one. Not well-thought out, of course, in that it was coercive and treated the addictive object, but not the addicts themselves. But then again, the effects of unchecked alcoholism are coercive on societies and on the more vulnerable, so I can't blame people for having decided that the best way to fight the effects of alcoholism is by making alcohol illegal.

To suggest Billy Sunday was a bully and used his stage and acclaim in Chicago as a bully pulpit is to miss a much wider picture of him. It may be true of the effects, but it misses why he thought such things were necessary. And that is because Billy was much like contemporary Evangelicalism: very, very gnostic. And proud of it. 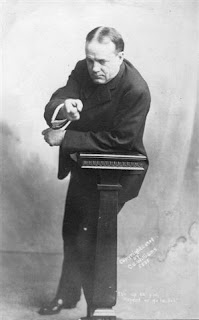 This is the Billy Sunday who would lead spiritual revivals by calling men and women to repent of their sins, come to the altar and ask Jesus to forgive them. With this action, he would proclaim:

"Now you can go out into the street and walk in front of a bus. And that would be the best thing to ever happen to you because you would die perfect and live forever with Jesus!"

The purpose of gnostic Christianity is to die and go to heaven. There is no heaven on earth. There is no hell on earth. Earth - and the body and everything physical - is a mere ladder, a resting place, a waiting room, an station where we expectantly twiddle out thumbs anticipating the Glory Train. The rest of the world can burn, and will. Just try to save as many people by bludgeoning them with scary words about their eternal damnation while you can.

That's gnostic Christianity in a nutshell. And it prioritizes individual over social, the powers-that-be over the oppressed, the here-and-now over sustainability. It expects heaven. It doesn't participate in bringing heaven to earth. For heaven is for the Christians only, according to gnostic Christianity. And if we brought it here, what's the purpose of an afterlife?

To read more about the gnosticism that has infected Conservative Christianity in the US - and therefore the world - read my book: Shout It from the Rooftops. $5.50 for print. $2.99 for Kindle.

Do it for heaven. Because getting hit by a bus just isn't worth it.
Written by jasdye at 10:52 AM