"There is no wasted bullet": American Christianity's God and Terrorism

This movie should disturb Christian consciences.

Mike Kosper, writing for The Gospel Coalition, is right. Zero Dark Thirty, a gritty, controversial movie about the hunt for Osama bin Laden, should disturb the Christian conscience. But not in the direction that Kosper seems to be headed. Like most American Christians - like most people, period - Kosper arrives at his ending under the prevailing assumption that violence is a necessary tool used to fight evil. As most American Christians presume, he believes that God wills and desires violence and that Jesus' death on the cross was a satisfactory use of violence to quench God's thirst for violence. A violence that otherwise would overtake the world in its wrath.

Kosper lets filmmaker Kathryn Bigelow's statement that she is a pacifist stand without question. And then he quotes and agrees with her refutation of that very claim:

Bin Laden wasn't defeated by superheroes zooming down from the sky; he was defeated by ordinary Americans who fought bravely even as they sometimes crossed moral lines, who labored greatly and intently, who gave all of themselves in both victory and defeat, in life and in death, for the defense of this nation. 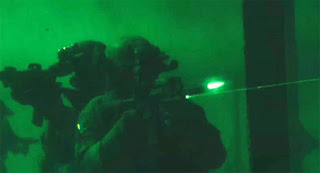 Rather than showing Seal Team Six to be superhuman warriors, surging with testosterone and screaming as they wreak havoc, they're more like a work crew, methodically operating a machinery of death that dismantles the compound and kills their targets with grim efficiency. There is no wasted bullet. No wasted energy or action. It's well coordinated, rational, and absolutely deadly.


The quote here, gruesome in itself even in its cold and methodical aims, reminds me of Calvinist theology - a cornerstone of neo-Reformed The Gospel Coalition. In fact, the Gospel itself is confused for Calvinist theology in TGC (So much so that those who do not agree with Reformed theology are accused of being unorthodox heretics). According to the Reformed doctrine of Limited Atonement, Jesus' blood on the cross was spilt for and only for those who would accept him, for those predestined to be saved. If Jesus died for those who would never accept him, his blood would have been wasted. But this idea is built upon the theological presupposition that each person is evil to the core and that nobody is intrinsically worth saving. It is a theology of violence.

On the other hand, a more open-ended view of Jesus' blood and salvation could lead one to believe that Jesus' blood was spilled not through the work of God, but as a work of violence of the state itself. The same state powers practiced to annihilate Osama bin Laden and kill children in his compound were the same forces used to kill Jesus.

The same state that overflows prisons and blames murder on bad people, rather than the bad socio-economic systems that it is designed to support.

The same state that says that drones are necessary because the other option is to put troops on the ground.

The same state that assumes that some have to starve for others to live plentifully.

Yet, the neo-Reformed movement, with its intense focus on heavenly rewards and the futility of this life outside a very narrow structure focused on death, also bears a striking resemblance to the the other side of the War on Terror coin - terrorism as a strategy.

Can there be much more terrifying than that cruciform of neo-Reformed texts, Jonathan Edwards' "Sinners in the Hands of an Angry God"? A theology that has as its pretext the fact that God is angry, and this angry God needed to kill - and die - in order to sate his anger (which is still not satisfied) is a theology wrapped in terror and fear.

And that's terrifying. And torturous.
Written by jasdye at 9:00 PM