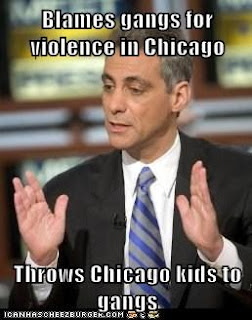 We've recently discussed how a mayor who is quickly undermining the public sector and removing funding from anti-violence measures in the city has also blamed residents for the gang-centric violence in their own neighborhoods.

And now he closes down more than 50 schools in these same high-poverty, high-crime, underresourced, segregated neighborhoods. In one shot. In one year. Without adequate research, cost-analysis. Just decides it needs to be done. Tells us it needs to be done. Holds some hearings, wherein parents come out in droves to voice, loudly, their disapproval. Where parents protest, where parents and students testify that shutting down their schools is dangerous and destabilizing, where parents hold mic-checks to send signals to CPS that CPS needs to listen to us.

And CPS ignores us. They send out proxies, but the proxies are bored. Rahm is nowhere to be seen. No, wait, he's riding the slopes when this announcement is made. On his behalf.

What effect will all this have? There are some things we can guess. But for the most part, we've already seen the effects of closing down several schools simultaneously. It's violence. Kids having to choose between gangs. In a highly-segregated city replete with racialized violence against young people, do you really believe that something horrible won't happen? Just as the shooting numbers are decreasing, children and care-givers will begin the new year at the tail end of a lethal summer running from gangs? Thanks, Rahm and Barbara.

In the meantime, hundreds of Chicago residents have been summarily fired. So much for stabilization, Byrd-Bennett!
Written by jasdye at 12:18 PM