The Infantization of Chicago (Schools in Crisis II)

As a new parent with some of my upbringing stuck deep inside me, I found the idea of an incredulous toddler maddening. I had to learn to break the habit of spanks and taps – all of which hurt my daughter incredibly more than any other act of hurting. She trusted her parents, I learned, and I was given the gift of her trust. So I learned in the process that I couldn’t just pick her up and do my will. She would have to make up her mind of her own volition. This would take a lot of patience on my part, a patience that I didn’t always want to sacrifice.

Contrast that to this skeezbag of a pastor, who claims to pick his wife up everyday just to show her who's boss.

The amount of abuse that happens in that household and within his congregation is unfathomable, for sure. But what happens when a mayor and his staff does that to an entire metropolis? Is this not systemic abuse?

Byrd-Bennett, in fact, never once showed at one of the loud, cantankerous school closing hearings held throughout the city. I was involved in one, and heard from several friends and media reports in the majority of others. Parents were irate. Parents were upset. They did not want their children's schools shut down and they overwhelmingly asked for more resources, not less.

But then there's Byrd-Bennet, treating us like confused children

Whereas Rahm has previously worked hard to attack teachers and other union workers (including those dreadful, evil librarians and bus drivers) as being shiftless and out of touch - as being enemies of the public rather than members of it, at least Byrd-Bennett had the good sense to stay out of it, at least in public. And now that she's been so far removed from public that she doesn't even show up in public, she decides that we're gonna need a corrective.

So she pictures parents as being pliable, compliant, willing to listen to her suggestion/ultimatum: That we need to close down schools (which we don't; it will not save money in the long or short run). And, according to her account, that's what we all learned. Even as it wasn't.

How does she document this since she wasn't there? She has binders full of parents.*

She who tried to ban the graphic novel Persepolis from the libraries and classrooms of Chicago Public Schools. High Schools like Lane Tech, one of the consistently top-ranked schools in the city. But then she slightly retracted, saying it was too mature for seventh graders. The same graphic novel on coming of age in Revolutionary Iran that is stocked in the YAL section of my local library - without adult supervision?

As Kenzo Shibato put it:

Persepolis is the story of a young girl growing up during the Islamic revolution in Iran. She is an inquisitive girl who speaks truth to power and refuses to believe the lies of a tyrannical government. She suffers censorship and austerity at the hands of powerful ideological bureaucrats.
Maybe it hits a little too close to home for CPS. 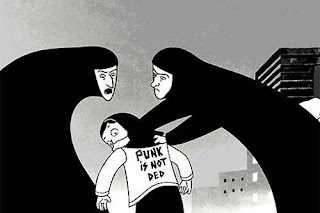 And he has the audacity to pretend that he knows perfectly well about raising children in poverty and the temerity to blame parents - when he's not blaming teachers - for the failure of kids in the classroom?

“The real problem is not just the education of our children,” he said. “We have parents that can’t be parents.
“We have too many kids, literally, from a broken home.”
The mayor said the city is making headway in connecting parents to their kids’ academic success, pointing to an initiative sponsored by Walgreens that rewards parents with $25 gift cards for picking up their child’s report card.

Sure Rahm, some parents of school children need to be dressed down for not taking responsibility for their children's well-being. But by people who know what they're going through. Not by some silverspoonin', North Shore, Austerity-promoting, anti-working poor mayor closing schools in our neighborhoods. Not only do you and can you not know what those parents are honestly going through that they can't or choose not to be at every meeting, you don't even listen to the ones who do involve themselves to the breaking point, who show up, who put in the time and volunteer, who know very well the cost of shutting down their children's schools or their neighboring schools. Who vigorously and pointedly protested and yet were dismissed like cantankerous children. What would make the already-beyond-taxed think that you'd be ready to do anything for them anyway, that things will go great for them if those who have been applying by all the rules can't even catch a break in your system?

This is not the first time Rahm's been to this rodeo, though. Shortly before, while visiting the West Side to introduce some new plan of reshuffling police officers in high-crime areas, he offered that it wasn't as much the job of the police to shut down crime as it was the job of community members. Rather than encouraging partnership, though, he is actually shutting down one of the only resources that has effectively connected community members and their beat cops, CAPS. Which means that the resources that we have to fight the effects of poverty and crime (in the form of working community schools or programs that connect police officers with the neighborhoods that they are often estranged from), as little as they are, are actually being taken away from us during the times when we most need them.

And you have the audacity to tell us your plans for us are for our own good? The obnoxiousness to carry us over your shoulders until we stop our temper tantrums? That's how you treat us?

And we're supposed to accept that, Chicagoans, as being better for us. But we know better than that. We're smart and aware. And grown-ass folks to boot.

-----------------------------------
*There are several other ways that Rahm and his administration remind me of Romney. Romney said in that meeting in a West Philadelphia school that classroom size doesn't affect performance, hinting that more students per class should be all right in an overly-crowded system. Guess what other non-educators with children in small classes have been saying such terrible nonsense?
Written by jasdye at 8:44 AM