Well, the kerfuffle in the Evangelical Blahg&Twitter World is huge. And I'm late to the party, of course (and to be honest, I could use the page hits, though probably not the character assassinations), but I want to be careful that I don't just come in swinging (which is usually reserved for my treatment of political figures).
Here, I don't want to talk so much about the controversy of the Rob Bell bruhaha (though I will link to some of the better articles I've read on that topic), but about the controversy behind the controversy: Namely, the idea that anything outside of a view of hell that isn't a literal universal, eternal, burning place of torment for the vast majority of humans is heretical. 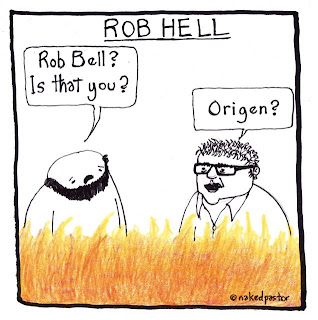 Naked Pastor. h/t Jesus Needs New PR
In fact, I think that what the BellHell controversy has opened is the opportunity for dialog as to other orthodoxical views on the afterlife. So, as a public service to you, my faithful readers, I've decided to round-up diverse - and largely Evangelical - voices who are talking about other views of hell besides the standard view. Because what I sense is driving this phenomenon is fear, fear that other perspectives that may be equally biblical and ancient, are really going to land us on the slippery slope of hell. I believe that it's quite the opposite.

As such, I'd like to introduce you to what I'll call The Great Robbing Hell Blog-a-Thon.
Scot McKnight's Jesus Creed: Waiting for Rob Bell is a good primer/introduction to the major various views on hell.
His part two offers up to the fact that the vision of hell in the Bible is a lot more complex and mysterious (and graceful and just) than the typical universalist/traditionalist argument holds:

Ian at The Broken Telegraph: Judgment: The Generous and Scandalous Message of Christ

Is it possible that others can know Jesus while not knowing his name? Can’t they live for him and receive him, know him and be known by him, without taking our version of the proper steps? Are we so sure God’s grace isn’t that generous? Perhaps a person rejects Jesus verbally, because the version they’ve been told about is a false one, but they receive Jesus in their life and respond in their actions. Is it possible that such a scenario is more acceptable to God than the person who receives Jesus verbally while accomplishing all of the churchy stuff, but does so because of selfish reasons like fear or pride?

Dan at Nailing it to the Door: No One Comes to the Father but by Me

Jesus did NOT say "I am starting a new religion with you guys, and this religion is the only way to avoid hell." Hell's not even part of the discussion. Nor did Jesus say "no one can be saved unless he thinks in his mind that I am the son of God and I am dying for his sins." No, Jesus says "I AM the way" directly in the context of his having just told his disciples "you know the way." The life they have lived with Jesus during the past three-plus years of his earthly ministry, the jobs he has set them to do, the miracles they have witnessed, the teaching they have absorbed; all these things wrapped together have taught them "the way" to the Father, which is the person of Jesus himself.

The same blogger, Dan Martin, also has a four part series on Eternal Destiny: Parts 1, 2, 3, and 4.
New Ways Forward argues that we centralize the idea of hell so much where we need to ask: Is Hell the Point of the Story?

When hell defines our story, when we see Jesus primarily as the solution to the problem of hell, when avoiding hell is the very reason why the Gospel is good news - then of course any questioning of that doctrine is going to be deeply threatening.

If that's the Story, then without hell the narrative loses its shape.

Sarah Bessey wrote an essay on this recently, and asked her readers to wrestle with this question: “without hell what is the point?”

It’s a great question, regardless of where you come down on the debate about hell itself. Because hell isn’t the point, not in the Torah, not to Jesus, not to Peter or Paul. That’s not to say it isn’t discussed or real - but it’s not the point of the narrative.

A follow-up: I Believe in Hell:

However, I also believe the way we talk about and picture hell too often has more to do with Dante than Jesus, is too often more a reflection of the baggage we bring to the text than what the text is saying.

Honestly I understand why people want to reject the doctrine of hell, and it’s not always just an unwillingness to stomach a difficult doctrine. Often it’s a sensitivity to the fact that the ways in which we talk about hell, and the overtly central role hell plays in our telling of the story, fits very poorly with the Biblical narrative and who we say God is.

And from this here blogg: Greg Boyd's on Eternal Judgment.
Left Cheek continued the Robbing Hell with our part one on New Testament scholar, pastor, theologian NT Wright's views on hell and a few questions: LSR: Surprised By Hope: Beyond Hope, Beyond Pity, pt. 1

The point is that when Jesus was warning his hearers about Gehenna, he was not, as a general rule, telling them that unless they repented in this life they would burn in the next one. As with God's kingdom, so with its opposite: it is on earth that things matter, not somewhere else. His message to his contemporaries was stark and (as we would say today) political. Unless they turned back from their hopeless and rebellious dreams of establishing God's kingdom in their own terms, not least through armed revolt against Rome, then the Roman juggernaut would do what large, greedy, and ruthless empires have always done to smaller countries (not least in the Middle East) whose resources they covet or whose strategic location they are anxious to guard. Rome would turn Jerusalmen into a hideous, stinking extension of its own smoldering rubbish heap. When Jesus said, "Unless you repent, you will all likewise perish," that is the primary meaning he had in mind.

God is utterly committed to set the world right in the end. This doctrine, like that of resurrection itself, is held firmly in place by the belief in God as creator, on the one side, and the belief in his goodness, on the other. And that setting right must necessarily involve the elimination of all that distorts God's good and lovely creation and in particular of all that defaces his image-bearing human creatures. Not to put too fine a point on it, there will be no barbed wire in the kingdom of God. And those whose whole being has become dependent upon barbed wire will have no place there either.

Tony Jones (Theoblogy) has a link to Keith deRose on Christian universalism - which, must be noted, has a lot more nuance than generally allowed by its critics (even NT Wright seems to prop up a straw man argument in the aforementioned posts) - in The Post You NEED to Read about Universalism:

As I’ll use it, “universalism” refers to the position that eventually all human beings will be saved and will enjoy everlasting life with Christ. This is compatible with the view that God will punish many people after death, and many universalists accept that there will be divine retribution, although some may not. What universalism does commit one to is that such punishment won’t last forever. Universalism is also incompatible with various views according to which some will be annihilated (after or without first receiving punishment). These views can agree with universalism in that, according to them, punishment isn’t everlasting, but they diverge from universalism in that they believe some will be denied everlasting life... In short, then, it’s the position that every human being will, eventually at least, make it to the party.

I will have a few more posts of my own coming later this week, and I would love to add others to this list, as you hear or write them, please leave yours in the comments.
Written by jasdye at 3:50 AM