Guestblogging
I got the opportunity to write a guest post for my friend and hero Ian at Broken Telegraph this week. "Narcissistic Stockholm Syndrome: War Machine" is the first in a three part series to be completed within the week at this site.

I'm really grateful for the opportunity to share on someone else's site, especially a friend like Ian's. He first came to my attention by writing an article taking fellow American Christians to task for supporting torture. That's very rare, not just among Evangelicals, but in the US in this particular culture.
----------------------------------------
Mission Creepin' in Libya. Yeah...

WCTI-TV in New Bern reports those Marines, assigned to the 26th Marine Expeditionary Unit (MEU) at Camp Lejuene, are "preserving the sanctity of the city [of Ajdubiyah] and the safety of the civilians within it."

Capt. Timothy Patrick with the 26th MEU told the station: "In Libya right now they are doing exactly what we need them to do. They are doing what they are told, and right now that's protecting Libyan people against Qadhafi forces."

I really think the war on terror is a bunch of bullshit
Just a poor excuse for you to use up all your bullets
How much money does it take to really make a full clip
9/11 building 7 did they really pull it
Uhh, And a bunch of other cover ups
Your childs future was the first to go with budget cuts
If you think that hurts then, wait here comes the uppercut
The school was garbage in the first place, thats on the up and up
Keep you at the bottom but tease you with the uppercrust
You get it then they move you so you never keeping up enough
If you turn on TV all you see’s a bunch of “what the f-cks”
Dude is dating so and so blabbering bout such and such
And that aint Jersey Shore, homie thats the news
And these the same people that supposed to be telling us the truth
Limbaugh is a racist, Glenn Beck is a racist
Gaza strip was getting bombed, Obama didn’t say shit
Thats why I aint vote for him, next one either
I’ma part of the problem, my problem is I’m peaceful
And I believe in the people.

But he's not done yet: Now you can say it ain't our fault if we never heard it
But if we know better than we probably deserve it
Jihad is not a holy war, wheres that in the worship?
Murdering is not Islam!
And you are not observant
And you are not a Muslim
Israel don’t take my side cause look how far you’ve pushed them
Walk with me into the ghetto, this where all the Kush went
Complain about the liquor store but what you drinking liquor for?
Complain about the gloom but when’d you pick a broom up?
Just listening to Pac aint gone make it stop
A rebel in your thoughts, aint gon make it halt
If you don’t become an actor you’ll never be a factor
Pills with million side effects
Take em when the pains felt
Wash them down with Diet soda!
Killin off your brain cells
Crooked banks around the World
Would gladly give a loan today
So if you ever miss payment
They can take your home away!

And then our complicity through our silence:

I think that all the silence is worse than all the violence
Fear is such a weak emotion thats why I despise it
We scared of almost everything, afraid to even tell the truth
So scared of what you think of me, I’m scared of even telling you
Sometimes I’m like the only person I feel safe to tell it to
I’m locked inside a cell in me, I know that there’s a jail in you
Consider this your bailing out, so take a breath, inhale a few
My screams is finally getting free, my thoughts is finally yelling through 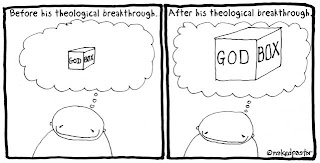 Email ThisBlogThis!Share to TwitterShare to FacebookShare to Pinterest
Labels: hip hop, links we like to link to, Masters of War, theology