The Authority to Question

My God, My God! Why have you forsaken me?
Eugene Peterson on the Bell-Hell controversy:

I don’t agree with everything Rob Bell says. But I think they’re worth saying. I think he puts a voice into the whole evangelical world which, if people will listen to it, will put you on your guard against judging people too quickly, making rapid dogmatic judgments on people. I don’t like it when people use hell and the wrath of God as weaponry against one another.

The whole interview is short, and really worth a read for its concise power. But because of its conciseness, many of Bell's detractors seem overly-confused. So let me try to clarify.
Questions. Are. Biblical.
To not allow questions is un-Godly.
Peterson is not saying that if you don't agree with Rob Bell's conclusions, then you are a moron in need of a shrink. Nor is he arguing the time-worn Na-na-nana-boo-boo defense. Pastor Peterson is merely stating the fact that dogmatism has no room in a living, breathing community. 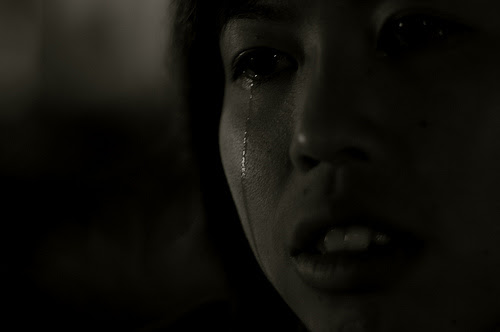 photo © 2008 ryuu ji | more info (via: Wylio)Anybody who thinks differently either has his ears and eyes closed to the suffering of the world (think Japan. Think of the thousands dying this morning from starvation while we suffocate on pizza. Think of bombs or mines going off on children this afternoon. Think of cancer-survivors in your family. Think of abandoned and neglected on your block), or has her eyes and ears closed to half of the Bible.
The searing suffering of Job and the Psalms. The madness of Ecclesiastes. The Father of Nations who dared ask the Lord to spare Sodom. The Jesus who dared ask his Father to spare his fate.
To ask questions of authority - whether that authority is God or the Church Fathers or, in this case, a particular strain of Catholic and Protestant theology - is necessary. It's part of our Christian walk as we follow the steps of Jesus.
But to tell us that we can't ask questions?...
A place where there is certitude - as Peterson notes, perhaps a bit irritably - is when Jesus confronts the religious leaders of his day. Not for being lax, not for their questions. But because they put restrictions on the people which limit their access to God (whom Jesus himself delivers them to):

A favorite passage of the Doctrinal Police, however, is in Galatians 1:

But the immediate and proper context makes it clear that this isn't about points of doctrine (which is unfortunately how it became standardly interpreted in the Greek-and-Roman-influenced West), it's about more burdens between Jesus and his followers. For instance, in the next chapter we find this:

But of course you don't need to go there or the next chapter, since just before the curse verse is this gem:

I am astonished that you are so quickly deserting the one who called you to live in the grace of Christ and are turning to a different gospel — which is really no gospel at all. Evidently some people are throwing you into confusion and are trying to pervert the gospel of Christ.**

It's Christ - Jesus - who is in the center of this all. It's not Christ's gospel, per se. And it's certainly not, "My interpretation of the Bible." It's the Good News of the Ascension of the New and Real Lord, Jesus Christ.
Now: why do I care? I'm not a pastor. I don't have a financial stake in the Evangelical field. Why am I up at the Lordforsakenhourof 1:30am writing this?
I can't help it. Christians are my family - brothers and sisters. Even when we have spats. Even when I disagree strongly with my literal blood brothers, we're still familia. So I want to go beyond the simple talking points and certainly beyond the anger and frustration. (not so sure I can do so at 1:30, though...). Galatians 3 saiz: