Tonight, Mrs. jasdye and I are going to take in a Sox game. Against the Detroit "Holy Hot Streak" Tigers. Goodness. We better win or I'm gonna be miserable to console.

I went into work a couple days this week. I moved stuff around, including to a larger room. But honeymoon weeks weren't meant for work. I so wish she didn't have to work. Lord, I miss her when she's away.

Well, I'm not gonna let you into that aspect of what I'm doing. If you wanna find out, get married for the first time and spend precious time with your spouse in the warm august days of summer, wake up to his or her smile and remind yourself how blessed you are that someone as truly beautiful as she or he is looking into your eyes, just as transfixed by you as you by her or him. (OK, so we do need optional gender-neutral singular third person pronouns. Are you happy? I never denied it. It's just the ones proffered are repulsively ugly.) 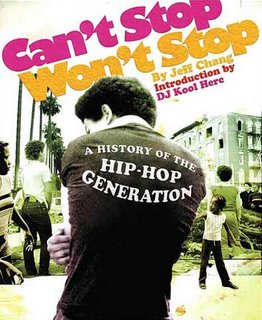 Reading the books of Romans and Psalms with her. Continuing to read Can't Stop Won't Stop: A History of the Hip-Hop Generation by Jeff Chang, Setting Limits in the Classroom: How to Move Beyond the Dance of Discipline in Today's Classrooms by Dr. Robert J. MacKenzie, and - when my head doesn't hurt from the tech-lite jargon, Practicing What We Know: Informed Reading Instruction, Ed. by Constance Weaver. Also the blogs on the left (esp. McKnight's daily series on Romans - which I'm still trying to catch up to.) And just checking out the Christian Vision Project, which asks the over-riding question of visionary leaders (pastors, scholars, et. al.) "How can followers of Christ be a counterculture for the common good?" The trend of answers that I'm seeing there are so anti-Pat Robertson/Ted Baehr/James Dobson/President Bush (not against those people, but against their representations of what Christianity is supposed to be about) that it makes me happy to count myself as a Christian again.

We're also praying alot more. Though the Book of Common Prayers is only ocassionally referenced. Short on time, really.

As far as music, iTunes ( not the iPod, which I haven't even bothered to ask permission for) is literally changing the ways I buy music, freeing me up to check out stuff I wouldn't normally get to listen to, such as folk-rockers Nick Drake and Jeff Buckley (of course, generally having more money is beneficial in this area too). And since I was young, I've been marginally interested in 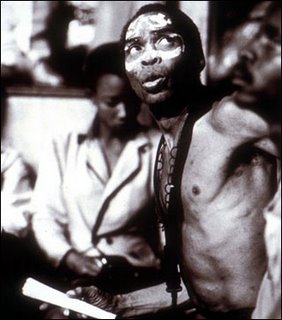 world music, but fearful that I wouldn't be able to listen to it without appearing to be a big fake. I finally decided that, well, every one's gotta start somewhere.

This morning, in addition to this year's additions of Ladysmith's Long Walk to Freedom and Peter Gabriel's Passion, I grazed over and picked a few of Afro-pop's Fela Kuti's shorter works (which only clock in at 7-10 minutes), as well as an obvious sex-crazed single by his son, Femi, titled "Beng Beng." Fela's music is a mix of West African beats tinged with sweaty, tribal funk (which seems looser than Brown's and more frentic than Clinton's to me) underlayed by a Miles Davis-influenced jazz, with a bit of a rock-fusion thrown in there for good effect. Oh, and some more Ladysmith, from the Paul Simon-produced Shaka Zulu.

Oh, and tomorrow the Mrs. and I begin our pre-marital counseling. Haha. I know, funny, right?
Written by jasdye at 4:33 PM