She doesn't want that record. No, wait, I'm sorry, is she in a coma?

It's hotter than Gehenna out here. And I wanna send a shout-out to the fine folks from Gehanna, Ohio who came down for a week of working at our church this week. I got a lot of sun. Which is why I'm indoors right now while Jennie's walking in the park by herself.

I need some more ice coffee.

Best records so far of 2006 (I'll again try to limit this to records that were either released this year or that I just found out about this year. This would preclude either Sufjan album I bought this year, as well as that-little-album-that-could, The Beatles' 1.):

1) Danielson, Ships. I've already done a slight review / meditation a few posts down on this overlooked gem. (Why do I say it's overlooked? Well at least Gnarls Barkley and Sufjan Stevens get some radio play, as well as spots on the iTunes lists. [Full disclosure, I iTune a lot of stuff now, even though I don't own an iPod yet. However, I'm getting married soon. And if you're not very creative with gifts but have some extra cash on hand...]) I'll only add this extra bit, this album's got me wrapped around itself with its childlike melodies and complex, percussive, and often surprising orchestrations. Note, Danielson and related projects are available through Sounds Familyre Records as well as Secretly Canadian, so it should be available at your local li'l record shop. "Did I Step on Your Trumpet" and "Cast It at the Setting Sail" are available on their myspace page. 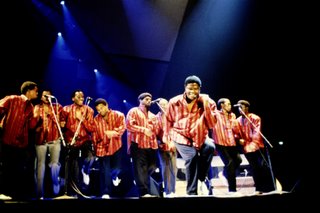 2) Ladysmith Black Mambazo, Long Walk to Freedom. Also wrapping around my head like a wet towel. I've also written about them and this album within the last few months. Many of the songs recorded here - if most or even all of them - were originally written and performed during the Apartheid era. In fact, one was written by a former - if not fully repentant at the moment - slave trader. That's just a slight observation I just made. Beyond that, I don't know Afrikaan nor any tribal language, much less South African tribal languages. I only say this because I don't do much world music. Unlike foreign-language films, there are no subtitles. But Ladysmith Black Mambazo has been in the back of my consciousness for awhile. In the mid-80's, they played a prominent role in Paul Simon's Graceland, which was all over the radio at the time. In the early nineties, Adam Again's song "Walk Between the Raindrops" addressed the murder of Headman Shabalala, one of the original members of the group. And in the late-90's, they joined with Charlie Peacock (a favorite of my formative Christian artistry years) to sing on a record produced by Steve Taylor (another favorite). And then I saw them perform Simon's "Homeless" on Leno or Letterman or whoever with Sarah McLaughlin. I iTuned the album the following day.

I have friends from Kenya that would blow me away every time they sang in Swahili. It's a certain polyrhythm that seems to rise just below the surface. I'm not sure it's a pan-African thing (I've felt that same experience with other West Africans), but LBM has the same effect, only with a more diverse and dynamic vocal arrangement. And with this album at least, they have great pop songs to go along with the arrangement. 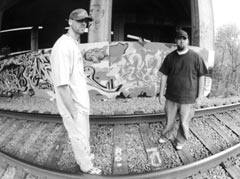 3 & 4) Mars Ill, Pro*Pain & Pirate Radio. These albums are just now starting to grow on me. The funkier sounds off of their remix BackWaterProphets made that an instant hit with me. But, as mentioned, BWP is a remix of an already superior album. As begets the independently produced and released Pirate Radio and the finally released, and aptly-titled, Pro*Pain, both albums belie a decidedly hard-rock edge that Dust had been rocking (and I remember my misgivings on it on the last DeepSpace 5 record that he had a large hand in), with a bent toward B. B. King-styled blues on Radio. But the sound is starting to grow on me. They never give into cheesy Rick Rubin-stuff nor give in completely to just Anthrax-Public Enemy-rock-out, leaving plenty of room for their filled-in but definitely independent and non-mainstream hip hop sound. Although, as they say on "Pirate Radio", "They'll never shut us down / Revolution's public now / the signal's too strong / to keep us in the underground." If you haven't checked out Mars Ill yet, I'm ashamed. I have links all over the place, because I write about these underappreciated cats all the time. 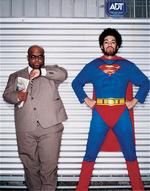 5) Gnarls Barkley, St. Elsewhere. "Go-Go Gadget Gospel" sums it up pretty well. Cee-Lo has been known as a gospel-inflected proto-singer for the longest (why some critics seemed surprised by his pipes is beyond me. He came up with Outkast after all). Danger Mouse, the other collaborator in Gnarls, is the go-to guy in producing goofy, pop culture as attested to by his popular mash-up of the White Album with the Black Album and his previous collabo with a semi-famous rapper, Doctor Doom-obsessed MF Doom on The Mouse and the Mask - basically a commercial for Cartoon Network's Adult Swim. Their love for pop culture is referenced throughout, including "Transformer", which sounds like a Saturday morning in the eighties complete with 'toons and the ads for those 'toons and a lot of sugar, the title of the album and the duo, and well, you spot some of the others.

But this about the music. And as much as creepy songs like "Necromancer" and "The Boogie Monster" set my stomach churling, there aren't too many powerful pop gems like "Crazy", "Smiley Faces", or the honest and vulnerable storm that is "Just a Thought." Nontheless, the instrumentals at the end of the disk show just how necessary Cee-Lo's vox are to this mix.
Written by jasdye at 6:28 PM