Hand-Maiden to the Fascists? 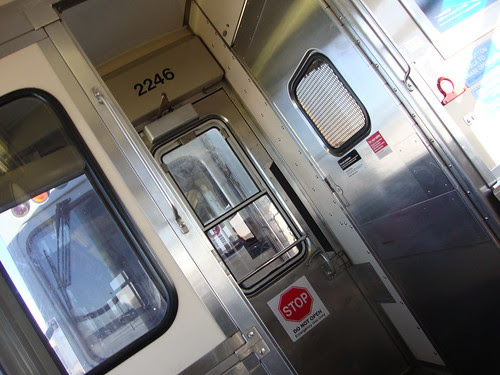 The Chicago Tribune reported about a multi-million dollar oopsie on Chicago's public transit system that is pulling needed and promised cars from the "L":

Now, maybe we can set those same journalistic instincts on the mayor's office when they decide to criminalize protests, or bash teachers and librarians. Or privatize schools. Or force teachers to work an extra two hours a day for less money than they were promised to make before the extra hours were tagged on. And then call them lazy and incompetent for refusing to take his crap. Or force libraries to close on Mondays because he can't "find" three million dollars - but he can find patrons to pony up $80 million to fund extra "police" protection during the WTO meetings.

And he can dispatch spokespeople to tell us why we don't need to know information about our transit system and the workings of our tax moneys, and he can hold press conferences to bully teachers and principals into accepting his moral obligations, and he can stock the local news with his staff to inform us why protesters are really evil professional anarchists bent on destroying our way of life for no other purpose than being evil...

And, for the most, our media watchdogs lap it up.

When I was watching the WMAQ news propaganda post with some spokesperson from his administration, nobody questioned the assertions that most of the aldermen trusted the wise and noble Emanuel - who, unlike the rest of these hicks, spent time in the Big City of Warshington and Knows How the Real World Operates (T) - to curtail our freedom and speech and assemblage for Our Own Good (C). The Sun-Times practically labeled him a hero on the front page of its Saturday paper ("Rahm Reinstitutes Mondays at the Libraries!") and waited until the last paragraph to give any word to the opposition. And story after story after story repeats the bold-faced lie that union teachers are lazy, that it's their fault that economically deprived schools continue to "fail" (by the chosen rubrics), and that privatized charter schools (mostly for-profit schools run with public money that can choose who can enroll and can kick poor-performing students out, which regular public schools can not do) are automatically better-performing than public schools - even though tests by their own rubrics show repeatedly that that's not true.

But finally, finally, we can point to one peace of evidence to say that the entire local media is not in the fascists' pockets.

We got a lot more to keep pushing for, though.