File this under "Record Companies Suck"

I'm not into bootlegs, copywrite violations, file-sharing, etc. I do think, that to an extent, they qualify as stealing, or some participation in it. Overall, though, my take is this: support the artist. The music industry business itself, especially as it is not supporting the development of the artists so much anymore, and are making artists pay for their own recordings, are paying them back a small percentage of what they make, don't cover touring and the heavy promotional stuff (except for traditional radio, something they've been good at for well over 50 years and the occasional big artist/band/American Idol), and now they're going after the fans.

One music fan (and certainly the type of music fan that the industry wants on their side, judging by her music selection), as many are well aware, was ordered to pay a sum of [edit] $220,000 (US) to the industry for sharing a total of 24 songs. That breaks down to about $9,250 each song - far above the going rate for pop music. The shocking thing, however, wasn't that she was charged, the shocking thing is that she didn't back down to the Goliath that is the RIAA and is going through the court system. And fighting against their expensive (and ludicrous) lawyers.

(Another charge against the music industry: Twenty-four songs along the likes of Richard Marx, Journey and Destiny's Child. Apparently, despite her high-tech means, she couldn't find any music made within this century.)

According to this article in the Washington Post, the RIAA views "the industry maintains that it is illegal for someone who has legally purchased a CD to transfer that music into his computer."

And furthermore, I haven't watched your joke of an award show (nor cared for the outcomes) in years.

Grow up or die.

Radiohead got more from its near give-away of its record In Rainbows online than the record company prior to this had given them for all of their sales online - including iTunes (before the actual physical copy even debuted).

"We’ve made more money out of this record than out of all the other Radiohead albums put together, forever [in terms of anything put out on the net]... It’s partly due to the fact that EMI wasn’t giving us any money for digital sales." This according to their frontman Thom Yorke in Wired Magazine. (h/t to paidContent.org via Ypulse)

In case you aren't aware (say... you're my wife) Radiohead decided to post its last record for download at whatever flippin' price the customer deemed it worthy to pay. Most, of course, paid nothing or close to nothing (not because it wasn't worth it. Many claim this to be their best album since Kid A. But because people can be wipes. Cheap wipes.), but Radiohead still got the better end of the bargain.

From the Wired intro:

Roughly 40 percent of [the downloaders] paid for it, according to comScore, at an average of $6 each, netting the band nearly $3 million. Plus, since it owns the master recording (a first for the band), Radiohead was also able to license the album for a record label to distribute the old-fashioned way — on CD.

And if that's not enough to get your heart fluttering... 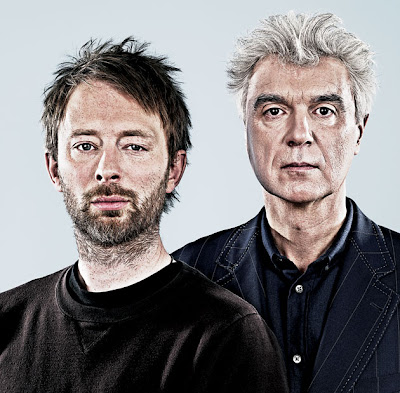 Radiohead talks to Talking Head
Written by jasdye at 2:14 PM