Ancient societies often chose an animal to burden all of their sins upon, all of the grievances of that society, the wrongs they have done. They would symbolically load their guilt onto a goat or a sheep as a valve to untie themselves from their own blunders, miscues, crimes. All their societal evil.

We still practice this. In my city, fans of the dreadful Northside baseball team have literally blamed a goat for the last hundred years of championship drought.

One year last decade the Chicago Cubs got awfully close, but choked under pressure. Being the team of choice of yuppies and douchebags they couldn't deal with the ensuing existential angst, so they blamed a goofy looking dude wearing a walkman and a baseball cap. Steve Bartman. 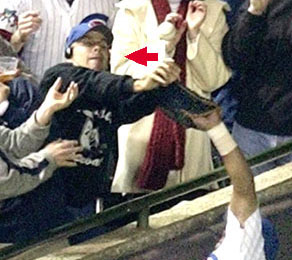 Despite the fact that his reaching out for a ball - while everybody else in the stands was also reaching for that ball - cost the Cubs an easy out, Bartman's not to blame for what followed afterwards. Which is to say, the Cubs, with a comfortable lead in the series, sucked. And lost. And haven't recovered and boo-hoo-hoo. Despite the fact that Bartman was just another goofy Cubs fan doing what goofy Cubs fans do - looking for souvenirs and saint relics wherever they may be found - the Cubs' general ineptitude and suckiness was placed solely upon his shoulders; it became his cross to bear. And many were all-too-eager to place him on it.

I'm not sure if he ever suffered physically, but there were threats, and there was plenty of reputation-marring. Cubs fans, being the douchebags that they are, don't care about others' feelings or lives (remember, they're also yuppies), so they were free to get carried away, placing all of their frustrations on Bartman's back. He became the sacrifice guy.*

But scapegoats aren't always so naive, goofy, or innocent. In some cases, they can be guilty of the crimes they are being accused of, with the added bonus that in punishing the scapegoats, we are trying to free ourselves of our own guilt for our collective crimes - but without actually ever resolving the crimes themselves.

Take Charles Graner and Lynddie England and the 320th Military Police Battalion at the Abu Ghraib prison in Iraq. Americans were shocked when we learned of and certainly when we saw the horrible, debasing, degrading, and lethal human rights abuses of prisoners and alleged terrorists at this and other prisons. The people who committed the acts of torture were punished, but those who led them to those acts in the first place and sanctioned them went off scot-free. By this, I don't just mean the Dark Sith Lord VP Cheney. I do mean him, but I also mean to extend the nets.

I mean those of us that were so set for vengeance that we cleared the way for the Afghanistan and Iraq Wars in the first place. I mean Republicans and Democrats. I mean the blood-thirsty news watchers. I mean myself, at the time, hungry to retaliate, to see not only blood-for-blood, but a hundred times as much if not more.

While guilty of disgusting and atrocious national and international crimes against humanity and humankind themselves, Graner and England were fall guys for both the military-industrial complex that drives on fear and debasement and racism and xenophobia, but also for an American society that runs on those fears and allows us to serve our most base, our most disgusting, our most heinous selves with the slightest push.

The very-public punishment of the 320th did not eradicate this from ourselves, but it did make us feel better about ourselves - even as we continue our wars against Third World nations, Muslims, Arabs (and now Iranians) - even within the US.

This shouldn't be a complete shocker to those who have studied our legacies of the Trail of Tears, Slavery, Japanese Internment Camps, Tuskegee, Jim Crow Laws, or the New Jim Crow. But then, we like to pretend that we've evolved past racism, which brings us to our next point.

This year has witnessed a new guilty scapegoat, George Zimmerman. The difference is tremendous, of course. Nobody died when Bartman reached his gloves out, but someone did when Zimmerman pulled out his gun.

What I've noticed from the right shortly after Trayvon Martin's death was hand-wringing followed by a lot of, "Well, let's not rush to judgment" statements. I thought these were overkill. The point is that there was no judgment. That's why we were and are so angry. That a murder had happened, a white man had gone free and a black, unarmed youth had been hunted down and killed. It was a little late to say, "Let's not rush to judgment."

Beyond, of course, the alleged (and close-to-home) hate crimes allegedly committed by black youth to older white men, the ignorant and destructive address-publishing, and posturing by silly hate groups like the New Black Panther Party and the Whiteheads of Tallahassee, or whatever they're called, beyond the Who-Struck-Who-First/Who Screamed/How Bloody Was Zimmerman? arguments, beyond the calls for Zimmerman's head on a platter when he was released on bail (Seriously? Do you have any idea how much danger he was in while locked up? Is that what fellow progressives want, revenge? I don't think so and I hope not), we should recognize that something's happening here and we may not know what it is.**

What Zimmerman did was awful and evil and bloody and ignorant and reckless. And it ended a life that he most likely hunted under the false pretense of protecting his own. This is no stupid game of stupid baseball. But it captured our national attention because it was symbolic of a much larger, much more systemic evil. There are millions of Trayvon Martins in our country right now, young men and women relegated to the outskirts of acceptability, an overzealous wannabe (or real) cop's trigger pull away from breath, bordering on the fists of fury and lethal energy simply because laws and policies have made their existence inconvenient as a way to make life as convenient for the White Upper Class Male Higherarchy (TM) as possible.

Those numbers are largely indicative not of crime innate to each race (that's racist thinking along the lines of The Bell Curve and David Duke, but it's unspoken among perhaps a majority of white Americans), but of wider systemic sins of violence and racial oppression against people of color as a means of class oppression, turning white brother against black sister to distract us from the work of the upper 0.1% who control and hoard the vast wealth of the land and leave the rest of us to fight over the scraps. With bloody consequences.

Whether or not he's convicted of it, Zimmerman is guilty of recklessly and needlessly ending the life of a young black man for the mere fact that this young man was a black male and therefore deemed a threat. And yes, I hope we find justice. But justice is different from revenge. Justice causes us to seek out the problems, the wrongs, the immoralities, the sins of our entire society and correct them. Not just push them off on someone else and edge her toward the crevice or hang him on a tree in order to continue to believe that we live in a post-racial, color-blind society. Because we don't.

We're gonna have to ask, In what ways are we actively allowing the deaths of thousands of Trayvon Martins every year? The answers may surprise us...