White Privilege is something difficult to talk about with my Euro-American allies. My posts on the topic are often ignored among self-described liberals and progressives, and often my friends feel they have to defend themselves. In fact, if there is any group that is as closed to discussing or acknowledging White Privilege than White Conservatives, it's White Liberals. I know a number of White Conservatives who are more open to the idea, more accepting of the idea that they benefit from White Privilege and therefore they question the way the system is set up and how to make it more fair.

In a few ways, I can see why White Liberals have a hard time accepting the idea of White Privilege. One, because they are White, they don't necessarily come into the conflict themselves. In some ways, even whites who are at the bottom of the pole benefit from the system in all sorts of daily interactions that rarely, if ever, come to the fore. But also, fighting Racism as a concept is a lot easier. There are Racists, and there is everybody else.

White Privilege is all white people in a land with white rule. It's me. And it may be you. It's not so clear cut: I'm not a villain or evil just because I was born white or have or even utilize White Privilege.

In this case, it's less about stirring up the masses and getting out the vote and holding rallies and more about recognizing how we contribute to and benefit from White Privilege and how we can make the system more equitable.

These are all ways in which I benefit. These characteristics keep me from having to contemplate discrimination based on my accent (Mid-West and Northern) which leads people to think I'm smarter or at least as smart as I actually am - a discrimination that often affects Southerners and rural people, and one which I've occasionally shared and find hard to dispel.

A few pictures. Most of my life, I've lived in and near neighborhoods where I was a clear minority due to my race and ethnicity (though my grandmother is Puerto Rican and darker-skinned, it's pretty clear that I'm not. Make that very clear). And in mostly poor neighborhoods with high crime rates. How often do I get pulled over? Fairly rarely. And for being in the wrong neighborhood. They may check me for drugs or whatever, but not deeply. Only once was I harassed by a cop, though. But even then he let me off with a warning.

My friends, on the other hand? It's a constant worry. They are targeted for DWB all. The. Time.

But it's not a concern for me. Speeding. Jaywalking. Cruising through stops (not that I do that, but I have). I rarely worry about them because I don't need to. 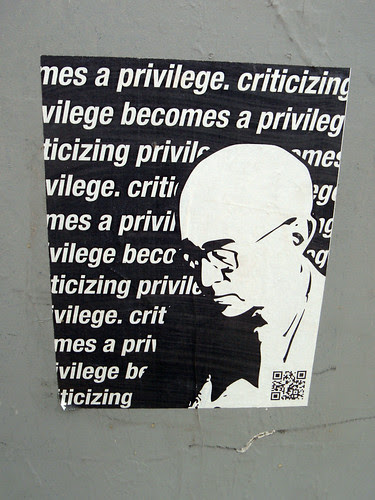 My height is seen as a strength - which is odd since I don't know how to fight. But it's kept me from trouble when I could have been in much more trouble (just gotta fake a look for a few seconds).

I may not always get the job, but being white opens doors and opportunities for me that I wouldn't have if I were a Black or Latino male. It also helps that I can share several cultural touchstones with others who have access to jobs, opportunities, etc.

Being white in Chicago means that, even if I smoke pot, I'm 1/18th less likely to be arrested than someone who is black for carrying weed. Across all social/racial/economic borders, the proportion of those who use illicit drugs are the same, but African Americans are stopped, seized, arrested, tried, and imprisoned up to eighteen times as often as their white counterparts.

Several years ago, I got off the bus from work at around midnight. A young African American woman also gets off. I don't want her to think I'm following her - because I was attracted to her and didn't want her to think I'm some sort of rapist or whatever - so I slow down significantly. In a matter of seconds, she turns back to me and says, "I'm so glad you're walking with me. It gets pretty scary out here." She doesn't worry about petty thieves so much as guys harassing her - something that my male privilege doesn't allow me to worry about. And rats, too. I guess she was also worried about the rats in some of the gardens...

But she trusted me not because I was someone she knew or went to school with or she saw me interact with others. But because of the color of my skin. (At times I have a friendly face, but it's hard to tell at that hour). She felt that I would be able to protect her based on my maleness, height, slightly athletic build. And the fact that, being a white male, if something did happen, authorities would be quicker to listen to my story.

By nature of my privileges, I am the protected class, and she was expecting that some of that protection would fall to her as well.

The trick is recognizing our privileges - which may be as simple as our voice and the ability we have to tell our stories without shame or embarrassment and then join in the voices of others. It is through those who do not share our privileges that we will learn the most about ourselves and what is unique to us, but also we will learn how we can aid, how we can share what we have (our own voices) to amplify their voices and together sing a majestic harmony of humanity. It is then that we may become our best selves.
Written by jasdye at 9:56 PM