For various reasons, I just want to give a much-needed shout-out to my homie, the Bishop of Durham, N. T. (Tom) Wright. Here's his peace on the Lord's Prayer (as a paradigm of Christian prayer). Wooorrdd!

Like most people, I can't get my head around the sheer number of people who have died recently in China and Burma (Myanmar). Tens of thousands of people, each with a name, each with a face, each equally beloved by God and each one could have been you or me or our families (and may be. My condolences and prayers to all affected.) And then you realize just how sad it is to lose just one. Steven Curtis Chapman is a singer-songwriter in the Contemporary Christian Music scene. And though I no longer listen to his output, it impacted me quite a bit as a teen (anybody remember "Saddle up your horses..."?). The loss of his five-year old daughter is both dramatic (she was run over by her brother on their driveway. My deepest condolences to him. And just hours before her sister was to be engaged) and sad. Eugene Cho had a lot of feedback on his post of the tragedy and has some tough, pastorly feedback of his own. 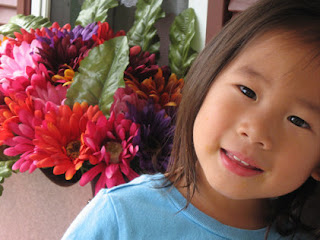 You thought that StuffWhitePeopleLike had our white butts in check? Think again, this cat knows his/her stuff. Traditions in White Culture. If that's not enough for you, try Selected Minutes from LOLCat City Council Meetings. Maxim Articles, Rewritten as Sociology Papers. And, What My Dad Is Talking About When He Yells, "That's What I'm Talking 'Bout."

Finally, here's a bevy of mixed spiritual metaphors all coming to a head: 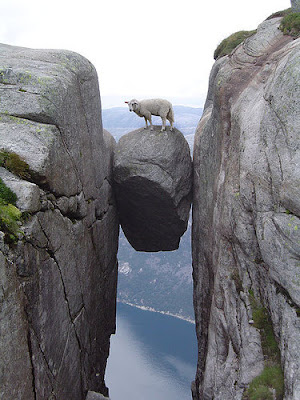 MarkO occasionally has a caption contest that I like to read all the comments for. Unfortunately, the last couple ones weren't as rich, but the top responses were pretty darned good. Here's a few of my faves for this photo:

Lambert finally found a place where he can truly claim the title “King of the Mountain”.

Youth Pastor-”See kids, without God in our lives, we feel like a sheep that is standing on a rock between two cliffs that are located high above a body of water of some sorts.”
Youth-”WHAT?”

Jesus: “Feed my sheep.”
Peter: “Maybe when he gets off that rock.”

If you act now, you may be able to enter this contest. I got nothin', man. 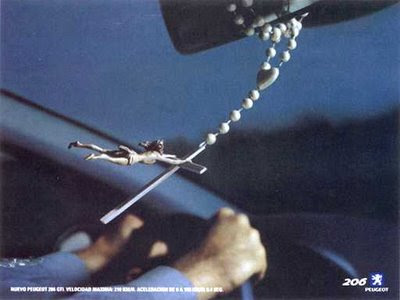 Email ThisBlogThis!Share to TwitterShare to FacebookShare to Pinterest
Labels: CCM, death, links we like to link to, N. T. Wright