Weekend Links We Like to Link to - Yet Another Political Edition

It seems that I just can't help myself... 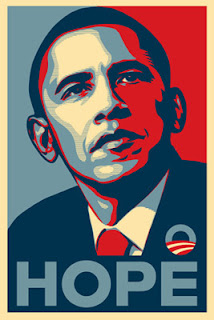 Meet the artist of the Obama posters.

I can't be the only person that thinks that the Department of Homeland Security is a piece of irrelevant, bullying sh*t.

“It was pretty tough and hard fought,” [Senator Obama] said about the primary season, describing the former first lady as a “formidable opponent.”

“She was relentless and very effective.”

He may be speaking too early, but not soon enough, for my money.

The real debates have finally begun - and they center on international dealings.

Yet, rural Americans (vastly responsible for the swing states) have different concerns on their minds, and need reassurance that they will be listened to.

Finally, the West Virginia Democratic primary was disappointing, not because of how badly Obama lost by, but for the fairly latent reasons why. But don't take my word for it... here's their words.

(Click here if video doesn't play.)*
And, here's some more of their words.

"He's Muslim, and you know, that has a lot to do with it."
"I think now I understand West Virginia's state slogan. 'West Virginia, No Interviews Please'."

Now, let's clarify some things (and I wish that the pundits, pontificators and politicians would do the same). My knowledge of Islam is limited, but I do understand that a central tenet of the religion is to declare one's allegiance to and testify to (to use American and Christian terms) the central figures of the religion. Christians like myself should know from our own scripture reading that to deny our God is to forsake our religion, our salvation, so to say. There is no such thing as a "secret Muslim" just like there is no such thing as a "secret Christian" (although in some countries - for safety reasons - Christianity is kept underground, yet it is still practiced and never denied).

One presidential candidate (who shall remain nameless) answered the question of whether or not she believed Obama to be a Muslim by the politically-shrewd yet poisonous non-answer of "Not as far as I know." Let's hope that another presidential candidate (one that was shamed by his own party for having a black daughter), will be more honorable in pulling any similar tactics from out of his campaign's bud (and, in likewise, Obama will shun any playing on that candidate's age).

That's not too much to ask for, is it?

* hat trip to Staycspits
Written by jasdye at 7:10 AM

Email ThisBlogThis!Share to TwitterShare to FacebookShare to Pinterest
Labels: Christianity, Hillary Clinton, Islam, links we like to link to, Obama-nia, race, Religon