These albums didn't quite make the cut, but I think they deserve an honorable mention. And if not by me, than by whom? 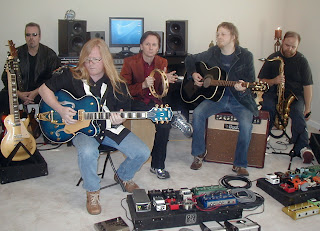 The Choir - O How the Mighty Have Fallen
You can almost say that again. But not quite, as this is almost a return to form for the ethereal, poetry-laden rockers. Not quite the masterpieces that were Circle Slide (one of my favorite of all time) or the heavier Speckled Bird (with an unfortunate-looking cover), yet still mighty good and solid. Old fans will cherish it, and hopefully they'll sell more copies than the extraordinary Mr. Buechner's Dream double album by Daniel Amos. If you're into spiritual expressions of life that neither pander nor preach, but rather sympathesize with saints and sinners all. But mostly sinners. "Thank you please / don't swing your shovel at my head, friend / No, I truly won't appreciate / that sound / When you tell me, I surely should / atone for my sins, / I hope you know / the fate of the proud." 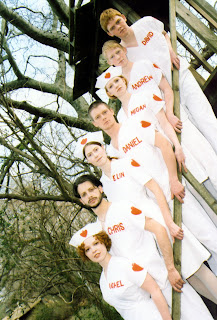 Danielson - Ships
He gets by with a little help from his frinds. One of the more peculiar acts in the indie scene, Daniel Smith and Co. (usually family w/ a few sidekicks - most famously Sufjan Stevens) have always played outsider artist with tree and nurse uniforms - serving as walking, styrofoam metaphors for the healing of the nations through Jesus. As to how Danielson differs from his protege's work, everything around Ships seems to urge on and further. Xylophones, piano keys, drum kits, snares, triangles, even the strumming of guitars and banjos, the whole surrounding is every bit propulsive and percussive, as if life itself is a seemingly random series of poundings that, sounded together, is positive, life-affirming and quite harmonic. Multi-layered virtual choirs don't drown out, but rather emphasize his weird screeching falsetto (for some reason, it works for me, where Brian Wilson's recent attempts don't). And there's some catchy, catchy songs on this trick.

Dissapointment of the year:
Tie:
The Roots - Game Theory
Jurrassic 5 - Feedback
Or am I just missing something? Was I just let down by past, too-superior works that these affairs just seem middling by comparison? Or are they actually, truly mediocre?

Overhyped piece of crap of the year:

The Hold Steady - Boys and Girls in America
Held steadily in late '70s/early '80s Springsteen. Every song is redundant, serving warmed over lyrics of lame parties and trying to get into some doped-up girl's pants. If my life was this boring, I'd wanna be the Boss, too. Makes me wonder what the lives of those who love this album are like? They can't all be that bad, can they?
Written by jasdye at 5:34 PM