When Men Rule, Patriarchy IS the Norm

Note: This post is a part of the One In Christ: A Week of Mutuality organized by Rachel Held Evans.

In Evangelical Christian - and almost solely in ECc's, as most other movements are fairly set in one cycle or another* - churches, there is a debate raging between those who believe that it is biblical and proper to have  both males and females sharing positions of power or only males holding positions of power**. Egalitarians believe that women and men should both share pastoralships and teaching positions over males and females. Complementarians hold that women have different roles and abilities than men and that it is the woman's responsibility is to complement male headship.

To use the word ‘patriarchy’ in an evangelical context is uncomfortable since the word is deemed ‘negative’ even by most complementarians. But evangelicals should ask why patriarchy seems negative to those of us who serve the God of Abraham, Isaac, and Jacob—the God and Father of Jesus Christ... Egalitarians are winning the evangelical gender debate, not because their arguments are stronger, but because, in some sense, we are all egalitarians now. The complementarian response must be more than reaction. It must instead present an alternative vision—a vision that sums up the burden of male headship under the cosmic rubric of the gospel of Christ and the restoration of all things in him. It must produce churches that are not embarrassed to tell us that when we say the 'Our Father,' we are patriarchs of the oldest kind.


I don’t understand when people, especially Christians, defend male, hetero-, white supremacy. No, that’s not true. I do. I just don’t want to.

This can be a vicious cycle, especially if every means of our reality is filtered through similar voices. This is especially true if the filter belongs to the dominant culture (which in the US belongs to any combination of White, heterosexual, male, middle and upper class, and Christian people).

This is why it’s important for Christians – and especially male, hetero-, and white American Christians - to understand that the bible isn’t written either for or by us. The voices we see and hear in it are not Western, nor are they affluent. They are, however, part of a society that is influenced by male patriarchy. That was the rule of the game in the Ancient Near East culture. That was the rule in Ancient Greek society, in Roman governance. And it’s the predominant rule now. Not just in Muslim cultures, not just in African or Latin cultures. In fact, in some circles, those cultures are more egalitarian or matriarchal than many white American cultures.

The fact is that patriarchy isn’t an alternative view of society. It’s the dominant view of society. It’s the view that Jesus cut down in his interactions with females and males, his approach to healings, his Sermon on the Mount. The way of patriarchy is the way of the world. Jesus has a kingdom (or Basileia, let’s say, as it isn’t run by kings, per se) that is not of this world. It’s a different way of interacting, of doing, of being, of relationships.

Before the coming of this faith, we were held in custody under the law, locked up until the faith that was to come would be revealed. So the law was our guardian until Christ came that we might be justified by faith.  Now that this faith has come, we are no longer under a guardian.

So in Christ Jesus you are all children of God through faith, for all of you who were baptized into Christ have clothed yourselves with Christ. There is neither Jew nor Gentile, neither slave nor free, nor is there male and female, for you are all one in Christ Jesus.


Before Jesus, we were under guardianship, we were under custody, locked up. Before Jesus, we were divided by race, class, sex. When we continue under the rules of the world, we are under patriarchy, under rule. Now, through the person and rule of the Christ, we are all free to be fully involved in every aspect of worship and being with and under God through the person of Jesus Christ, without division, without dominionists or lords. Under equality, we no longer have to trust that hopefully this male/ruler/leader won’t be a tyrant. Hopefully. We are free from having to rely on the goodness or badness or incompetence of a few men.

The ways in which this was radical and liberating in the Middle East, the Roman Empire, in Hellenistic cultures can hardly be overstated  - though I believe that the passages in I Tim and Titus that complementarians use to justify their positions were written because some people, in their new found liberty acted without thinking of their cultural context and how that might have destroyed the witness of the Gospel. It was, for some, too much too soon. There is a lesson there...

While we should not use our freedoms to act like fools, nevertheless we are free according to the biblical witness. 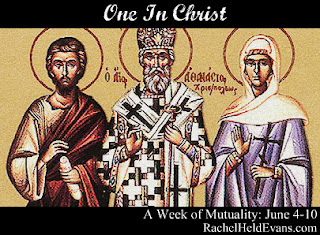 Consider the way Jesus approached women in public. Consider the radical approach he took with the Samaritan woman. Men did not talk to women out in the open, for women were beneath the dignity of a man's response. Yet a religious Jew was talking to an adulterous Samaritan woman. It was so radical that she was almost convinced that he was propositioning her. But his offer was to make her the first evangelist in Samaria. In asking her for some of her water at the beginning of their conversation, in fact, he was already beginning to empower her.

Consider that in each of the Gospel stories of the first Easter, the first apostles and witnesses of the resurrection were women - at a time when women's testimonies were not trusted in court. Consider that Apollos was largely discipled by Priscilla, a woman (whom some argue wrote the book of Hebrews). Consider the number of female church leaders in Rome that Paul addresses at the end of his letter there, including Junia (pictured above at the right). Consider Mary Magdelene, one of Jesus' disciples and highly praised by him and the Gospel writers.


**Of course, when we talk about limiting power to a select few, my question would be, are we actually being egalitarian? If the majority of the power in the church is in the hand of the pastor and/or the elder board, can that church truly be about equality? My argument would be that it, while sexual equality in those positions brings us closer to true equality, most institutionalized churches have a power dynamic that looks like the radical early churches. Even so, the name "egalitarian" in this context is a bit misleading. To be truly egalitarian, the dynamics of the church would play out more closely to the Meetings of the Friends - circles, circles everywhere.
Written by jasdye at 8:40 PM