This map represents some of the worst of us. 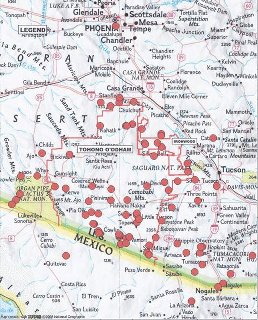 Each of the red dots in this picture represents a dead body found in Arizona. The eighty-eight bodies belong to migrants trying to cross the desert from October of last year to April. The region outlined in red is the Tohono O'odham Indian Reservation. Migrants tried to trek across this land out of desperation, trying to find some work that would do them well. Trying to find adequate wages to subsist them and their families. Some do; enough to give a faint bit of hope to people across the border who's own jobs have been destroyed by the very American economic policies that keep many of us well-fed and in comfort.

The migrants cross this area because, being a reservation, there are not as many authority figures to incarcerate and then deport them back. But they get thirsty. Real thirsty.

And so devoted volunteers go out in trucks and leave water filling depots for the migrants. It's an act of selfless mercy and sacrifice. It's an act that Christians would (or should) recognize as the great commandment - Love your neighbor as yourself. And migrants are our neighbors, as sure as Samaritans were neighbors of faithful Jews. And thirsty migrants, to Christ-followers, represent Jesus.

"I was thirsty and you gave me drink."

But some people don't like Jesus, apparently. They vandalize and destroy the water stations.

Some die from violence, shot by Border Patrol agents, vigilantes or thieves. Others are killed in accidents: stumbling in rugged terrain, falling over the wall,  or struck by vehicles.  Many others perish of dehydration and exposure – conditions made worse by the recent sabotage of water stations set out by Border Angeles and other humanitarian groups.