I've got a shameful confession: As a young adult, I once declared that Black Gospel music wasn't really about the Gospel because its aim wasn't to convert people to Christianity. It wasn't, in my estimation, saving souls from the clutches of hell. 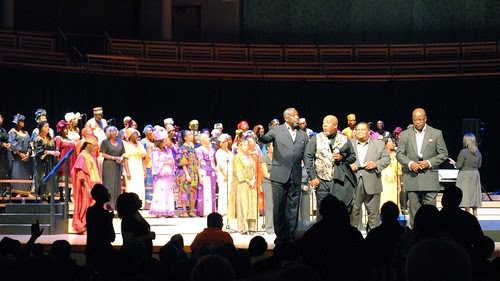 I was wrong. Black Gospel Music, far better than nearly any other type of music in the Contemporary Christian market or much anything else I've ever witnessed - and I would count evangelists in that - witnessed and proclaimed the gospel.

Allow me to clarify.

The term gospel means "good news", which any good Evangelical knows. We know that and we think that the good news being declared is the good news that Jesus paid for our individual sins with his death and, therefore, if we trust in him we are removed from the ultimate price of our sins and get to be with God when we die. This is alternately called salvation. The ultimate problem with this, from my perspective, is that we don't seem to understand what Jesus was attempting to save his followers from, let alone to.

Fortunately, understanding what the gospel entails can help to clarify and round that out a bit for us.

In the era of the Roman Empire, when Jesus was of age, the empire (which consisted of Palestine, where Jesus was born and spent the overwhelming majority of his life) centered around the one person of note: the emperor. Whenever an heir apparent was born or a new one rose to the throne, evangelists (messengers, from which we get the word "angels") were sent through the kingdom to spread the good news of the coming king.

In fact, they would say, "I bring you glad tidings of good news."

The birth anunciations of Jesus of Nazareth to the lowly shepherds were then a mocking of the Roman Empire with a different objective. Not only was this announcement about a new king, but about a new kingdom, a new way moving, new rules, new perspectives.

We can see what that new kingdom would look like throughout the gospel accounts of Jesus' life. "The blind receive sight, the lame walk, those who have leprosy are cured, the deaf hear, the dead are raised, and the good news is preached to the poor." (Luke 7:22)

The most precise account of this new kingdom presided by this new king may be in the Sermon on the Mount. Jesus assessed all of the current political/societal/religious views of the time and found them all severely lacking. He condemned the power-and-violence seeking of the Roman Empire, the violent reactionism of the zealots, the accommodations of the Herodites, the alleged purity of the Pharisees, the hiding and disconnection of the Essenes.

He offered something fresh, creative new, and utterly not-of-this-world. He offered healing and hope for the sick, the downtrodden, the forgotten, the poor, outcasts, the depressed, homeless, victimized, brutalized, oppressed. Slaves, women, children, gentiles - he welcomed them all with open arms and instructed his kingdom-mates to do the same.

So it makes sense that much of Black Gospel Music is about rejoicing in and pushing towards liberation rather than solemnly waiting for heaven (although many songs brilliantly did both). Because that's what "Gospel" means after all.

Blow your horn, Gabriel. Blow.
Written by jasdye at 3:00 PM