Rahm Emanuel is an Occupier. I do not mean that in the sense that he is sympathetic to the OWS movement. Quite the contrary, he has arrested hundreds of demonstrators (including nurses staffed for the demonstration) for daring to take back public space in the last two weekends. I mean that the current mayor of Chicago is an occupying force in the traditional sense - ie, he comes into a territory, extracts goods and resources from it for his own benefit, and leaves when he darned well feels like it.

It's not really a surprise that Rahm would be so bad for this city in his first year. It's not in the least surprising that he would demonize teachers in order to get an extra two hours each day out of them for free. That he would cut or threaten pensions and benefits for fire and police forces, as well as public transit workers. That he would turn law enforcement against the very people who are struggling for them. That he would further slash library hours and services. And that he would do all this without reaching into the corporate slush funds that are TIFS, in which he could, conceivably at least, use vast sums of money and tax breaks to lure in heavy hitters like Boeing under the auspices that it would bring more jobs to Chicago. Even though the few jobs actually brought by these enormous tax breaks tend to live in the burbs.

None of this wasn't already known. Even the least astute of us political observers, like myself, knew he would do these tactics. He is a forceful pragmatist funded - both personally and in career - by the banks and following in the tradition of the Daley's, after all. It doesn't take a weatherman...

The surprising aspect isn't so much like he's acting like a shrewd Scott Walker, it's that NOBODY in the media said, "We need to cover someone else." Nobody with a real voice said, "I think that we need to get behind and support Miguel del Valle. He has a proven track record, saved the city money, citywide experience, coalition-builder, and he's anti-corporate." Nobody offered an alternative voice. 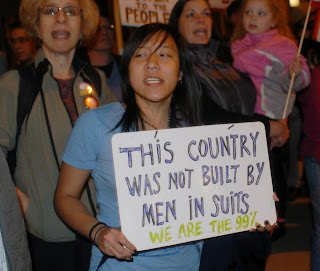 I'm saddened but not shocked that the state of city journalism has deteriorated so much in such a fine city as Chicago. Neither of the two major dailies raised a dissenting voice against the (Corporate) people's choice - let alone the free commuter rag. This was even amongst those that were heavily critical of Daley. If there were dissenters, they were most often critical of the fact that Rahm is a Democrat and worked for Clinton and Obama, rather than that he leveraged his connections to put him on the overseeing board of Fannie and Freddy - whereupon it's obvious that he oversaw nothing, let alone protected the vulnerable. I'm not absolutely positive about most of the community and alt papers, though, but even the Chicago Reader was deafening by its silence. I went to a forum where Mick Dumke, of all respectable people, offered that Emanuel was the most qualified candidate to run the city. Jarovsky, usually astute on matters of public funding, seemed to cynically hold out on giving his opinion and wishing that Rahm wouldn't "waste the opportunity" to get rid of the all-controlling tool of the mayor's and his burgeoning corporatocracy, the TIF.

HuffPo, TPM, and Salon - all voices for progressivism in the national arena, more or less - were also critically silent when it came to Chicago's future. But not, fortunately for Wisconsin at least, when it came to that bozo just to the north of us.

About the ONLY person investigating the mayoral run and still being critical toward Rahm's mayoral stunt is a long-term activist, Don Washington, who still blogs at MayoralTutorial.

But just as Ben Joravsky has illuminated dialogue about funding in Chicago by his persistent voice and knowledge on the subject of TIFs, just as Mike Royko was able to chink away at the Original Hizzonner, I see Don doing the same toward this mayor given the time an the proper loudspeakers.

Which is too bad. Because when the media doesn't cover the issues, the people have to rely on other sources of information. Besides, what's the main difference between Emanuel and Walker? The people are on to Walker now...

Update:
And here Don shows us why he's leading the league. In It’s Called a Fact Check, Media People,Mr. Tutorial not only takes down Emanuel (and his cronies') union-bashing - largely focusing on the CTA this time - but the media's tendency to get behind whatever it is that Rahm says as if it's gospel truth.

So what’s happening here is that Mayor Emanuel and Forrest Claypool are asking the unions to sacrifice their wages, pensions, benefits and your safety and... to take the blame for them having to live up to their responsibilities as administrators of the system. Yes, that’s right. You see between just the TIF funds and the possible savings in the M/WBE program we’re talking over a billion dollars that could be used to do any number of things to help the city’s finances but that’s not on the table. What’s on the table are middle class and working class families becoming less secure or being blamed for you and I having to pay a little more for public transit. This is the case because Mayor Emanuel and Forrest are more interested in REDUCING taxes on corporations and going to bat for them downstate to further shift the tax load from them on to you. (Emphases mine)