Before I continue, I should warn you that if you want a blanket endorsement of the Democratic Party, or President Obama, you've come to the wrong place. The Democratic Party is basically Corporatocracy Lite, with some love for their union organizers. The Republican Party is run by Corporatocracy On Steroids, and has as their base the Christendom Party and the Fiscally-Concerned Party, which, ironically, is only concerned about the fiscality of the corporations.
But I couldn't stop laughing at the absurdity of some of the points on this chain email. I know Democrats - and us progressives - do a lot of the same awful gymnastics in our praise of some and ignorant biting of others. I see it all the time. But, mygoodness, looking up to former President George W Bush as a businessman? And one who created wealth?

The Lawyers' Party
By Bruce Walker

Look at leaders of the Democrat Party in Congress:
Harry Reid is a lawyer.
Nancy Pelosi is a lawyer.
[Oh, the humanity! Imagine. People passing and backing up laws who are trained to know how to do that! That's just silly]
The Republican Party is different.[But of course. I can't believe it's not butter.]
President Bush is a businessman. [Are you SURE this isn't butter?? Have you seen his failed businesses? Seriously? All of them failed because he was too lasseiz faire. Except for when they succeeded. From governmental and public investments. Much like some oil company did in Iraq... Each of them rescued because he was his daddy's son.]
Vice President Cheney is a businessman. [To the detriment of Iraq, and the US. And the US's armed forces. But thanks for reminding us what we get when our country is up for sale to the highest bidders.]
The leaders of the Republican Revolution:
Newt Gingrich was a history professor. [Who is doomed to repeat it. But wait, I thought you guys hated them intellectual elites? Or just the ones who know wtf they're talking about?]
Tom Delay was an exterminator. [Makes sense, somehow...]
Dick Armey was an economist. [Who makes a KILLING by spreading lies as a for-sale lobbyist and executive liar. Thanks for that pathetic noise chamber on the health care reform. Bought to you buy the Real Death Panels, the Medical Insurance Companies]
House Minority Leader Boehner was a plastic manufacturer. [Also makes a lot of sense...]
The former Senate Majority Leader Bill Frist is a heart surgeon. [Yet, ironically...]

Who was the last Republican president who was a lawyer?
Gerald Ford, who left office 31 years ago and who barely won the Republican
nomination as a sitting president, running against Ronald Reagan in 1976. ["An ACTOR!" *In my finest Orson Welles.]

The Republican Party is made up of real people doing real work, [And here I thought it was made of plastic people doing oily work] who are often the targets of lawyers. [We sure are. Especially when they're sicced on us by Wal-Mart, Haliburton, Exxelon, BP, Mansanto... But sometimes, they're also the ones defending us. In this case, these lawyers seem kind of confused by their roles.]

The Democrat Party is made up of lawyers. Democrats mock and scorn men [You're thinking of feminists... And maybe bad dates.]who create wealth[No, they LURVE those guys. They're playing for the same team, fellers], like Bush and Cheney [Create wealth, sure. But for who? Oh, don't answer that, it was rhetorical. No, never mind, I'll give you a clue: Haliburton.], or who heal the sick, like Frist [or who deny the ability for the sick to be healed], or who immerse themselves in history [by taking luxurious three week vacations to Europe right after announcing his presidency and want to throw us to the steaming piles of repeated history such as the Civil War or race riots], like Gingrich.

The Lawyers Party sees these sorts of people, who provide goods and services
that people want ["that people wantare brainwashed to buy." There, fixxt!], as the enemies of America [Wishing upon a friggin' time-lapsed falling star!]. And, so we have seen the procession of official enemies, in the eyes of the Lawyers Party, grow. [Bi-Wishing]

Against whom do Hillary and Obama rail? [Amtrak?] Pharmaceutical companies, oil companies, hospitals, manufacturers, fast food restaurant chains, large retail businesses, bankers, and anyone producing anything of value in our nation. [What? ? McDonald's? Burger King? Bank of America? Wal-Mart? I effing WISH they would rail and flail and maybe even wail on these people! (I'm not sure sure, however, on whether or not they should tail or mail. Those sound iffy, at best.) All these companies do is produce tragic garbage that we've been brainwashed to consume (sometimes the hospitals, too. Blame the spirit of consumerism and capitalistic "enterprise" for that, the reason our health care is the costliest in the world). Yet, Clinton and Obama actually kowtow to them. Despite the cost to our planet, to our oceans, to our workers, to the workers (slaves) in third world countries. Yes, please. Stick up for them. Stick up for the enemies of the people and the planet.]

This is the natural consequence of viewing everything through the eyes of lawyers. Lawyers solve problems by successfully representing their clients, in this case the American people [Yes, that would be HORRIBLE if they were to do that! Just abysmally horrible IF THEY ACTUALLY represented the American people!]. Lawyers seek to have new laws passed [If the old ones are bad, is this such a problem? Of course, this just goes to show you that not everybody trusts laws. Some people think we'd be better off with laws from the 1950's if not before then. After all, isn't everything just the same? If it isn't, don't you think it should be?], they seek to win lawsuits, they press appellate courts to overturn precedent [Yes, Barack Obama sure is overturning precedent, just like he promised. No more wars in the Middle East. Shut down rendition and restored habeus corpus, not to mention Gitmo. Oh, and that blasted Patriot Act was taken away from us too. Dang it. He's such a Overturner-in-Cheif!], and lawyers always parse language to favor their side [Not unlike politicians]. 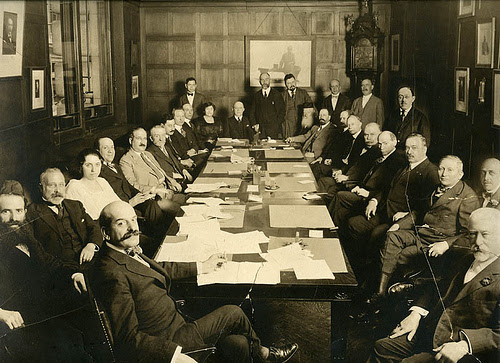 photo © 2009 Center for Jewish History, NYC | more info (via: Wylio)
------------
I won't waste your time with the rest of it. How does representing the interests of the people you're supposed to represent become a bad thing? Seriously! I only tri-wish they were doing so.
Written by jasdye at 1:55 PM