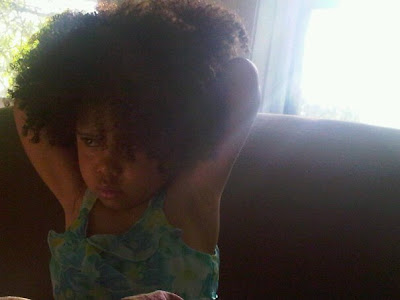 This is 'Nyssa. One of my daughter's best friends. And she has glorious hair. But being African-Latino, she wouldn't know it from listening to and watching mainstream ideas of beauty. By "mainstream", of course, we mean most images pumped through our psyches via commercials, television shows, ads, movies, dolls, cartoons, magazines, videos, websites, big fashion shows...
Sure, there are some black and Latino actors/models/spokespersons/casts. But they are the very exception to the Rule of White Supremacy in Body Image. And they seem to merely prove the Rule of White Supremacy in Body Image: White people look best. Blonde is sexy - straight or curly, but definitely controlled. Barbie is the ideal female, and the norm is Jennifer Anniston. Non-white women are usually accepted by the larger culture based on Euro-American ideas of beauty.
So it was pretty awesome when Nyssa decided one day to have her hair out. She looked different, but it's a look that's not only natural, it's tremendously beautiful.
It's amazing that, even before the age of four, she understood and internalized the RWSBI. She was ashamed of her hair. Being part Puerto Rican, with dark, thick curly hair, I can relate a bit. When I was an awkward teenager, I wanted the long, straight hair of the rock stars I saw on MTV. But it would never come out long and straight, but frizzy and all over the place. The closest approximation I could give is that I had an unkempt Jewfro. And for a White boy, this was unacceptable.
Some years later, my wife demonstrated that she loved me and really liked my curly, curly hair. Feeling accepted (and in some ways, exceptional) made me accept my own self, my own body, my own glorious mess of hair (which, fortunately, our daughter adopted. It looks magnificent on her, dang it).
Somehow, the message of love and self-acceptance got to my daughter's gorgeous best friend before she turned four. She woke up one morning and decided she wanted her hair out.

Of course, when Joss went with me to pick Nyssa up a few days ago, she walked right past 'Nyssa to her mom and asked where her friend was. Boldness sometimes takes some adjusting to...
Written by jasdye at 10:00 AM