Justice Vs Love
Round 1
Let's Go!
I'm not sure which theologian or pastor came up with the concept of a God who has to balance his dual natures.* See, God is both Loving and Just, the argument begins; those two characteristics are essential to understanding God's character. This I find very agreeable. Completely.
The argument follows, however, that you should not overemphasize God's love, because then you'll miss out on his justice. The argument continues to assert that we should not rely too heavily on God's Love, because that would make God out to be a wussy hippie. And if you emphasize too much of God's Justice, you make him out to be a pathological warmonger. Justice and Love, in this view, are teetering on the scales of God, constantly keeping each other in balance lest God gets carried away by either extreme. 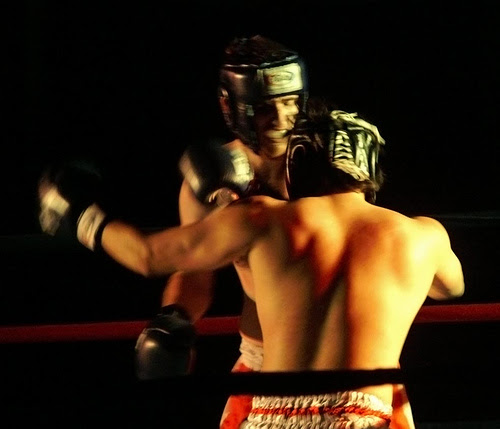 photo © 2007 Todd Anderson | more info (via: Wylio)Honestly, I'd like to know who gave us this perspective of the dueling natures of God. I'll bet it was before Calvin. Was it Anselm? I smell Anselm on this...
This Justice Battles Love view is destructive. It undermines God (again with the gnostic dualism creeping into much of Christendom. You'd think Western Christianity is a really simple but busted computer with all of its binary structures). It undermines Justice. And it undermines Love.
Love isn't the opposite of Justice. Love is the tree of which Justice is an essential branch.
This view of God as Blind Justitia, balancing his two essences on a commerce scale is based on a misunderstanding of justice as much as a misunderstanding of love. I've talked quite a bit about love before - and I'll say it again, love is not soft. It may be tender when it needs to be, but it can also be ferocious.
Justice, however... The image of Justice needs to be rescued as well. Because when Evangelicals talk about justice they think of two things:
The weird part is that the first is closer to the truth of Justice and its biblical base. Justice is recognizing that the world is out of sorts - that we not only no longer live in Eden, but rather we're killing our brothers in the wheat fields - and that these injustices can be made right. Justice is a work of redemption and protection. It's making sure slumlords take care of their tenants and keep the rats at bay. It's bringing war criminals (including those from the United States) to trial for their crimes. It's working for health care coverage for the most vulnerable. It's digging holes and constructing wells for those without access to clean, drinkable water. It's collaborating on an equitable society that gives the same rights and respects and power to women and non-whites as white males have but refuse to acknowledge their power. It's an end to arms-trading. It's taking care of slave-wagers in India, Vietnam, China, and Singapore. It's releasing and redeeming sex-slaves around your corner.
The prophet Micah looked around at the injustice - at the brutalities against the poor and the exploited - in the nations around him as well as his and declared that justice needed to flow down like a mighty stream and righteousness like the rolling rivers. Isaiah mourned Jerusalem's loss of justice and the subsequent murder and victimizing, leaving their children starving, in the first chapter. But then he envisioned a new order in the latter chapters. One where the swords will be beaten into plowshares. One where creation will dance and trees will clap their hands.
Cornel West takes a page from the prophets and puts in the palm of a tweet:
"Never forget that justice is what love looks like in public"

Justice is an arm of Love. Not the opposing force.
Since I'm up way too late, I'll just close with a couple comments I left a friend of mine on Facebook:

Justice is what I hope for and long for. I'm trying to answer this in as many ways as possible because whoever came up with the whole 'redemptive violence' thing really did a number on the western church - and particularly Americans.

But justice means making the wrongs right. it means to correct the wrongs and see wrong-doing banished. though there is punishment for wrong-doers, that's not the focus of justice - certainly not the long-view focus. the focus - as in the focus of discipline and correction in the church correction passages in the letters to the Corinthians - is to reconcile, to restore, to right, to wipe away every tear, to wash the shores clean of pollution, to raise every valley and lower every mountain so that all may see the glory of the Lord (metaphorically speaking, of course. heaven'd be pretty boring if it were flat).

---------
*I'm sure I'll get some comments about how it's not really the case, about how this is just an easy way to describe the complex nature of God. But it's an extremely inadequate way of doing so.
**I honestly think that the idea of 'social justice' came about because of the violent-and-retributive reputation that justice has gotten in since the medieval period. It's a PR attempt to redeem justice in the Christian churches that have largely abandoned it during much of the 20th Century.
Written by jasdye at 9:52 PM