According to research revealed in this Slate story, Americans are twice as likely to report regularly attending Christian church services as to actually go to church services with any sort of regularity. Which, apparently, means that we're no more religious than, say, Europe.
But of course, there's more than meets the eye, right? A few thoughts:

1) Since we're basically a nation of functioning secularism, it doesn't make sense (as if it really ever did) to call ourselves a "Christian" nation. It, of course, makes even less sense to blame all of our societal ills on atheists, (h/t Alise) as this poor letter-to-the-editor author does.

2) There's that disturbing trend of mixing religion (and particularly, Christianity) with nationalism/patriotism. One should not confuse one for the other. Scary path, that is*. 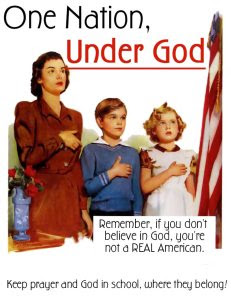 I kid you not, this is a real poster at this church's website.
3) Going to church - or not going to church - doesn't make one a Christian. Following Christ does (and although different faith traditions have differing opinions on what that means, I will only say that simply reciting a prayer is *not* following Jesus). Within that, though, I do think that it's important for people who follow Jesus to be at church - or more importantly, to be church. To be in communion with others who share in the stories, the tragedies, the heart breaks, the hope, the lives, the burials, and the bread and wine of Jesus' body and blood. I do believe that the act of faith-community is an essential one.

How, then, can Christian churches - who are to live as the communal embodiment of Jesus - not be able to embrace those who think/act/look/believe just a bit differently? Many of our churches have such a hard time with people with mental tics (depression, bipolar disorder, schizophrenia), for example. Is this because they don't fit in with our particular notions of normalized Americans? Americans first, Christians second? Or is there another kingdom that Christians belong to? Is there another national identity that trumps all others - in which there is neither slave nor free, male nor female, Greek, pagan, or Jew?