Mules to my right, Jackasses to my left.

During a Republican gubernatorial nominee debate in Arizona, incumbent (but not elected) governor and full-time liability Jan Brewer opened up her mouth, allowing more unfounded biases to pour out. She declared, "They're coming here, and they're bringing drugs. And they're doing drop houses, and they're extorting people and they're terrorizing the families."

Because the veracity of her reports needed to be further justified while simultaneously adopted by the gullible and/or racists, she did us all the pleasure of expounding the other day.

Well, we all know* that the majority of the people that are coming to Arizona and trespassing are now become drug mules. They're coming across our borders in huge numbers. The drug cartels have taken control of the immigration. …

So they are criminals. They're breaking the law when they are trespassing and they're criminals when they pack the marijuana and the drugs on their backs...

I believe today and in the circumstances that we are facing, that the majority of the illegal trespassers that are coming in the state of Arizona are under the direction and control of organized drug cartels, and they are bringing drugs in...

There's strong information to us that they come as illegal people wanting to come to work. Then they are accosted and they become subjects of the drug cartel. 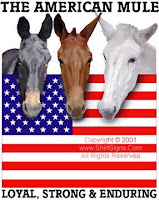 1) Mules? Beasts of burden. Animals. Un-human. There's a direct, Orwellian correlation between this type of language and the type of language used to justify chattel slavery and genocide. Those who argue against immigrants ("illegal" or not) continue in the fine tradition of de-humanizing their targets in order to lift themselves up (in Brewer's case, it's a political ploy, one that she shares with the Segregationists of the middle 20th Century).
2) Brewer denied that Mexicans and other Latin-Americans are coming through the Southern border to find work, to feed their families. It's a furthering of her de-humanizing practices (and the de-humanization of non-Whites in a White Supremacy rule), and another attempt to de-familiarize. These are not people with real struggles and needs, people whose lives are on the precipice largely because of American intervention into their economy, according to this WS thinking.
3) She's actually countering the claims of a fellow Arizona Republican. That's a bit of hope badly needed in these highly politicized days.
4) In trying to once again to connect immigration to the drug trade (two things that need to be solved separately) Brewer once again shows her sympathydeep-seated racism. Latinos are only good for _______________(fill in the blank). For some people, apparently, they're only good as boogie-men. But this misses another, broader point.
Q1) Why drug-smuggling? Why is that on the table at all in discussing Latinos?
Simplified A1) Because it's a real problem in Mexico, especially near the borders. And if it's a problem in Mexico, then, ergo, forsooth it must be a Mexican problem. And if it's a Messican problem and thems is coming here, then it will also be an Amuriken problem. Unlesses we's stop them.
Q2) Why is drug-smuggling an issue in the northern border regions of Mexico?
Simplified A2) Because Amerigringos can't get enough of the sh*t. As long as we don't have to change our way of life to get it. And we don't plan on doing that anytime soon...
We're causing the drug-smuggling problems, and yet we take no ownership in that.

4) In the name of Christian love, I propose that every time Jan Brewer comes out to speak/open up a shopping center/brey, we should greet her with a familiar, familial call of "HEE-HAW! HEE-HAW!" It would make her feel at home, among the jackasses.
*Sadly, no.
Written by jasdye at 11:54 AM