The Holy Days of Grief

When tragedies strike, we are alternately and simultaneously awe-struck, grief-stricken, stupid.

Here I'm thinking of not just national, CNN-feeder tragedies like Hurricane Sandy or massacres in crowded elementary schools or theaters or malls, but also the everyday tragedies of poverty, of war, of death, of prison, of murder (all predominant among people of color who are disproportionately targeted for institutional poverty and its residual effects). But also, what of divorce, lost friendships, depression, mental disease, domestic violence and abuse, deteriorating physical conditions, ends of eras? How do we react when such sorrow is uncomfortably placed on our laps like sobbing children?

We can hardly be blamed for being stupid in the face of the incomprehensible. After all, we are taught to not cry over spilled milk - so what happens when we find our friend literally crying over milk that's gone to waste when she is already unsure of how she'll feed herself and her kids through the end of the month?

My own religious tradition is recklessly infamous for such insipidity. I'm convinced that has to do with Western Christianity's creeping (and now substantial) gnosticism - this fascination with this idea that we must know the answer to everything under the sea. And if we don't - well it doesn't matter because Jesus does and when we die we can ask him. This trend is made much worse when we consider such high profile would-be Jesus mouth-speakers as Bryan Fischer, John Piper, or Pat Robertson - who, for instance, blame lack of prayer in schools, God teaching us a theological lesson, and the gay agenda for such tragedies.

These responses aren't just untimely or wrong or inappropriate or even just plain inhumane and gross. They are assholy: An attempt to act sacred, profound, spiritual, and godly while being a tremendous asshole.

But this isn't about them*. I spend too much time and mental energy worrying about others - and during moments of grief, they should not be allowed the space or the privilege of our collective heads. This is about what a holy response perhaps could look like.

What would be an appropriate Christian response?

And I think of the holy days and how they can each speak to us in our sorrow. Specifically, the three biggest days on the Christmas calendar (at least those recognized by the majority of the Western Church - those of liturgical and non-liturgical backgrounds) and the two most recognized seasons:


Often, I find that I respond in one way or another to bad news. I think many of us do. Some of the worst advice is found in, for example, acting as if Easter were right around the corner - particularly among ministers. For myself, leaning heavily towards a social justice view of Christianity, I tend to focus on calls to societal repentance. But today I'm meditating on the idea of conscientiously practicing all five. I'm considering particularly what it means to place a central crux on the incarnation. The incarnation in Christian tradition is the idea of God coming to weak, fragile humanity as a weak, fragile human. It is the ultimate of humbling; the idea that God the Creator just does not understand human suffering and life and so must enter into the atmosphere, into our sphere, into our fragility and brokenness, must be broken and spilled.

Good Friday is the ultimate of violence - taking the good and murdering it out of spite, out of greed, out of a need to control and dominate. But that is not all - it is also a consideration and a mourning as John and the women witnessed this death. And it's a running away from the realities of such violence as Peter and the disciples did - a selfish but understandable fear. It is murder, it is death, it is theft, it is rape - it is the barrel of evil.

The promise of rebirth and renewal associated with Easter is often the first and predominant response of the American Christian to such violence. It's therapeutic for the teller to tell the grieving that everything is going to be all right. That Tim lives forever in a better place now. And whether or not we can say that with any sense of truth into the life of the hearer, it's a horrible first step; it delegitimizes the sorrow, the hurt, the grieving process of the ones who have lost. What if there really is no money at the end of the month? How about we never see Tim or Nana again on this side of earth? Do we need to wait sixty years to see them again? Isn't it appropriate to say goodbye here and now? Is there closure? Is there finality? Is there really hope - because if there is, then there is dignity and room to grieve the good emotions God gave us, no?

Hope is necessary, of course, but it cannot be unmoored from the desperate realities of humanity and suffering. Hope gets us through, but false hope is a dream deferred. It stinks and leaves us more desperate than when we began. I speak from years of ministerial experience. 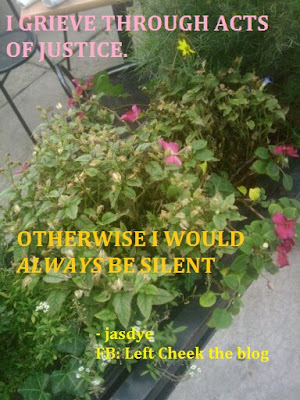 Sometimes, after such a tragedy, my first instinct is to cry foul. To call for a soul-search as we do during Lent. To say that we need to look deep within and repent of our selfishness, our greed, our racism, our institutional monstrosity. That is a primary way of how I grieve. And often I - and other like-minded friends - are silenced. Told to wait for a more appropriate moment. That our anger at the system that has caused such tragedies as the needless deaths in Sandy Hook or Haiti is out of place. I remain that it is not only beneficial but necessary as a people, as a nation, to have such prophets of Lenten lamentations. But again, such calls should never stand alone. I want what I say, however, to always arise out of hope and anguish and shared experiences. The prophetic lamentations should never be divorced from the other holy respects.

Which includes the expectation associated with Advent - the expectation as I see it is a star set in the west. This star is a witness, in the words of Martin Luther King, Jr, "Look. The arch of history is long but it bends toward justice." It stands at a precipice - this land between the reality that is and the place that we may have and balances the two, ever moving toward the land of milk and honey while steadfastly aware of the time and location in the desert of discontent. It is an energizing vision for justice among violations and a vista for beauty among the unsightly. It is our long-expectant hope that continues to hold out when we are weary from doing good.

The incarnation seen in Christmas continues - and that is key. Not that the Christian God looks down upon humanity and approves or disapproves of our behavior or allows or does not allow horrible, monstrous, devastating events to occur. But that that God walks with us, suffers and loses with us, struggles and starves with us.

-------------------------------
*I believe very much that the Christian God speaks primarily with and through and alongside the Body of believers - the Ecclesia, the Church. And so what we say and do during these moments of crises is reflective of and on Jesus - for better and worse. When we neglect to enter into these moments of grief and loss as Jesus and his thoughtful followers have demonstrated, we neglect to answer as Jesus. If the American Church (and specifically here I'm thinking of the Evangelical wing of it) desires to be called followers of Jesus, it needs to discard these "leaders" forthwith.
Written by jasdye at 5:58 PM