It's time these losers were outted. Let’s get one thing straight right off the bat:
Tim Profitt -- Rand Paul campaign's Bourbon County coordinator*, whose friends tackled a woman protester outside a televised political debate that featured Paul while Profitt stomped on her shoulders and head -- you are not a man. You are a sissy. You can’t stand the idea that your ideas could be attacked, so you committed the ultimate ad hominem – lashing out in a heinous act of barbaric and gang-rape-ish violence. Big, bad Tim Proffit, you’re a little scared sissy that needs to be spanked and shown for the little punk you are – afraid to pick on someone your own size. 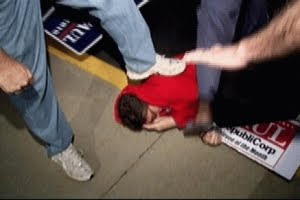 Additionally, for premeditating your assault and then for blaming your victim, Tim Profitt, you’re a wipe. Do you make your wife and children apologize to you after you hit them? A waste of a human being, a smelly maggot who will never grow up to become a full-fledged fly on the windshield of humanity.
Mike Pezzano, Tim Profitt’s friend, the one with the “Don’t Tread on Me” t-shirt who groped the protester while trying to hold her in position for a heel-to-the-head, you are a sissy too. It’s amazing that someone who complains about an imaginary and metaphorical trampling (from the State-power structure to himself) can’t see the irony in actually tackling someone to the ground so that she can be literally tread on. But what to expect from a laughable despicable sissy?

Of course we can’t stop there, though. After all, these two simian sissies are merely pawns – foot soldiers, if you will.
Rand Paul – you who continuously draws in such hate-filled sissies, including a full-on, out-of-the-box KKK Dragon and American Nazi supporter, yet can never truly distance yourself from them – you are a sissy as well. But not just because of the people who align themselves with you, nor even for your refusal to completely disassociate yourself from them as if you can’t survive without their thuggish Neanderthal knuckles keeping you grounded to your hateful scorched earth. Nor even because of your half-hearted apologies and false equivalencies.
No, Rand Paul, you are a sissy because of your stated policies (that as a senatorial candidate, you are within arms-reach of actually doing something about from a lofty position of power) against people who are – at least individually – weaker than you and your buddies.
Dr. Rand Paul – the Sissy, MD – you have stated that you think that the Civil Rights Act, which aims to protect minorities, was unnecessary. Oooh, mighty brave of you, white man.
Dr. Rand Paul – Pansy – you attack government assistance to citizens who can barely survive, as is, while shamelessly profiting from that same system through Medicare payments to your practice. But at least you're consistent on your desire to continue to live "comfortably." Because, of course, you're a sissy.
Dr. Rand Paul – you who took your nickname from Ayn Rand, the “writer” / “philosopher” who believes that anyone who isn’t a commerce engineer is a parasite on humanity – also made boldly false claims against the Americans with Disabilities Act and disapproved of the Act as he *sides* with business owners. Should the law’s name be changed to the Parasites with Disabilities Inaction?
For allowing your base to continue to attack and threaten people who hold different viewpoints, such as the self-described Lincoln Republican Tea Party lady who outted Pezzano, you are a sissy, Paulie. Laura Grass describes the fear that your people have put on her and those like her:

Rand Paul isn't going to do anything to me… but his supporters might. I'm afraid of them. Over at Liberty Forest, during the primary, there were calls for volunteers to "crush" me. They still despise me. They smear me around the internet.

Is this the kind of legacy you want to leave for yourself? The Thug Who Would Be Senator?
Or, more accurately, The Sissy Who Wants to Be Respected.

*Note: I had incorrectly labeled Mr. Profitt as a campaign adviser, instead of the non-ranked, volunteer position of campaign coordinator. Thanks, David M, for that.
Written by jasdye at 3:08 PM